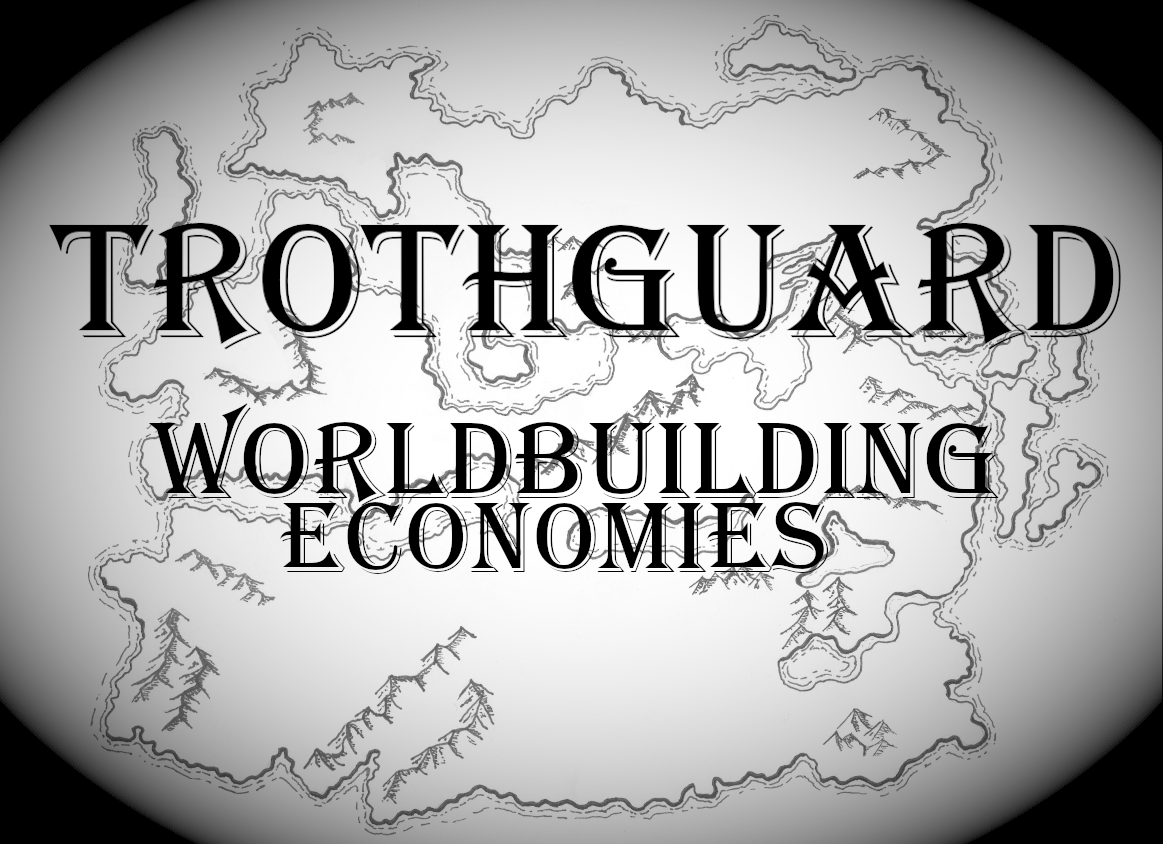 Worldbuilding your own economy can be a complicated task. Depending on how deep you want to get, it can really balloon into a very complex topic. Given that I don't have a degree in Economics, I'm going to keep it fairly simple and just touch on the aspects that are likely to impact your world. As with previous posts, this is going to build upon things we discussed in past posts, which you might find helpful to go back to if you missed them!

Societal Progress
The very first thing we should look at when we go to create our economy is how advanced the society is, since there's a big difference in how we'd approach a medieval feudal economy compared to a high-tech futuristic economy. How advanced these people are will affect the economic system, the currency type, trade, and probably several other important aspects of your economy. Thankfully, usually by the time you're building an economy, you'll have already worked this out!

Before we set out further, also note that the values of a culture and the resources available to them (regionally and nationally) should influence the economy, currency, and what/how they trade. Additionally, location and climate may have an effect on the economy (ie: transport is difficult / small windows for trade opportunities). So keep this in mind going forward! I find it's helpful to list these factors at the top of my page so that I can keep them in mind as I proceed through my creation of the economy.

Economic System
Next, we should think about the Economic System we're going to use - which basically means: "What is your economy based on?". There seem to be basically four overall types. These are: "Traditional", "Command", "Market", and "Mixed".

Traditional systems based on goods, services, and work. It relies on a lot of people and is closest to what we would have seen in ancient and feudal societies. The barter system and trade is a large part of this system.

Command systems are based on a central authority, who controls most or all of the economic system. This is closest to how communist countries work.

Market systems are basically pure and uncontrolled free markets, driven purely by supply and demand, without government interference. This is basically a theoretical type, since in the real world we have no examples of a purely market-driven system - but it could work in your world!

Mixed systems are a combination of Market and Command systems, where both the government and private entities exert control over the economy. The western world is an example of a mixed economy (which is the most prolific real-world type of economy).

As part of choosing your economic system, also consider:

These questions will help guide you to which type of economic system might be best suited for your world.

Currency
With those two aspects decided, we should figure out what our economy's currency is, and what the base value is. This could be based on the resources available in the area, or could be more esoteric based on the technologies available and the societal values of the people who you're building this currency for.

Some ancient native tribes used to use beads, and strings of beads, as a currency. Gold, silver, copper, and other precious metals are common currencies. A near-modern or futuristic setting might use cryptocurrency as their standard form of currency. If you have a high-magic setting, perhaps magic itself is the base form of currency (As we see in many of Brandon Sanderson's books for example).

Once you have chosen what your main type of currency is, the next step is to decide what larger and smaller denominations are (or look like) and what value they have.

A lot of fantasy places the standard currency as a gold piece, with lower denominations being silver and copper. In a D&D setting for example, a silver is 1/10th of a Gold, and a Copper is 1/100th of a Gold and 1/10th of a Silver. In our modern society, the standard currency is generally a Dollar, with Quarters, Nickels, Dimes, and Pennies below that.

Within your setting, you can make this as wild as you'd like! Keep in mind when doing something unique that you should find a way to relate the value of your currency to items that your readers/players relate to. A good way to do this is to discuss what a common item is worth, such as bread, grain, or milk.

It is also worth considering how your currency is earned or distributed, which will be based to some degree on the economic system you've chosen.

Role of Government
In most cases, you'll have some form of government involvement in both the local trade and international trade. So, how involved is the government? Consider:

Corruption & Shadow Economy
In any situation where there is money to be made, there will inevitably be some amount of corruption. In an economic system, this is sometimes called a Shadow Economy as it often goes hand in hand with the production, sale, and transport of illegal goods and services. Sometimes this is directly through the central authority, sometimes it's through companies, and of course, sometimes it's just individuals. So, think about your economy and how it's designed and how goods are moved and traded, and think about what parts of that could be prone to corruption and how that might look. Consider:

Conclusion
By this point, I think you'll have filled out enough details that you should have a passable economy to use in your setting or story. As always, if there is something you find useful in building an economy that you think I missed, please let me know! I'm always interested in hearing about how other people worldbuild.

If you decide to use this template to create an economy, feel free to post about it and mention me or toss me a link in the comments! I'd love to see your use of this template.