As soon as I read @worldbuilder's free write, I instantly knew I had to create this map. The idea of a cave full of rare and useful mushrooms that glowed faintly in the dark was just too much fun to pass up! Particularly when you imagine them guarded by thousands of spiders waiting for a hapless villager to wander just a little too far into the cave... 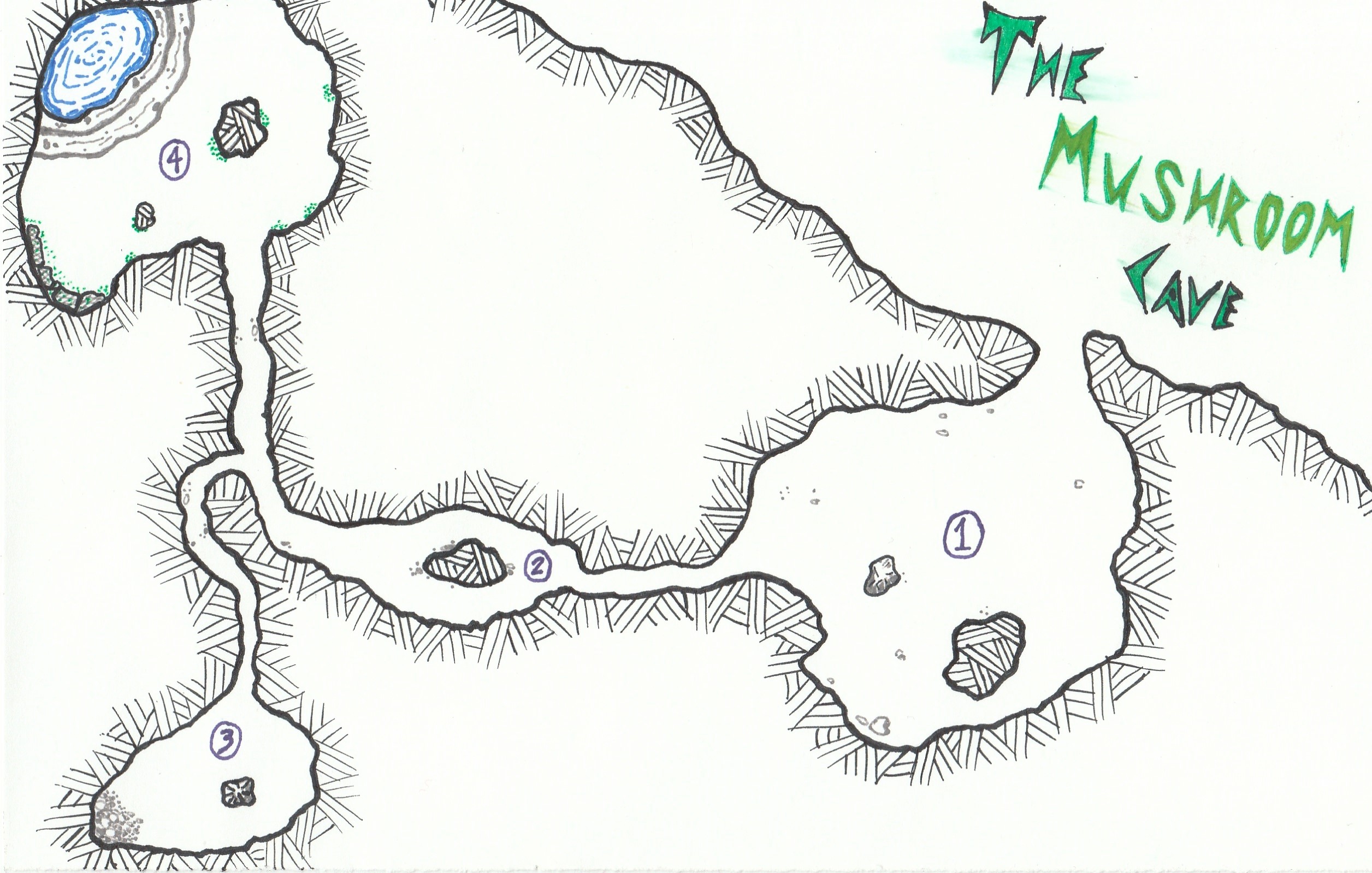 On the 'technical' side of things, this was my first real try at making rocks on a map, and I hope they turned out well enough that you can tell what they are. It's also the first time I've tried to give a hint at the topography in a room, which is what the area around the pool in Room 4 is meant to signify. I think I missed the mark on that a little, so I'll need to practice that more!

Now, let's dive into what I imagine this caves rooms to be! (If you feel like this map is something you could use, feel free to take it and of course describe the rooms however you'd like!)

A wide cave mouth opens into a natural cave, providing dim but adequate light in this entrance chamber. A few large rocks, big enough to almost be considered boulders, are scattered throughout the chamber, and a large pillar of stone connects to the nearly fifteen foot high cavern ceiling. The remains of an old campsite can be found, though it hasn't been used in many weeks. A darkened tunnel on the west side of this chamber leads deeper into the cave.

This split corridor offers a choice of path around a central pillar. Both are short diversions, but the footing on the north path is considerably worse - the cave here being littered with small rocks and sharp stone walls.

The tunnel to this third room is so narrow and tight that to reach it as an average sized human, you must do so crawling - and even then the walls press uncomfortably into your skin. A few scrapes and bruises later though, it opens into a small chamber with a single large boulder. Against the boulder sits a long-forgotten skeleton, who's clothes are nearly completely decomposed. A satchel sits to it's left. The far west side of the room appears to have been caved in, possibly hinting at a long-buried alternate path.

This room is full of a type of mushroom which glows faintly green in the otherwise pitch dark of this section of cave. A large spring of water in the north section of the room giving it enough moisture for the fungi to flourish. A pair of stone pillars rise to meet the ceiling here, and clumps of the green mushrooms grow on both of them, as well as most of the walls. The south-west section of the room holds a troubling sight - several indistinct globs of webbing, one of which looks eerily human-shaped... A strange clicking and faint skittering can be heard if one pauses to listen in this room.

And, a bonus somewhat edited version of the map!

Oh man, this is awesome! You are getting really frickin' good at drawing maps now! !WBT

Thank you! It's been a lot of fun to learn. I still have a long way to go before I match some of my cartography idols, but I'm hoping to one day rank among them!

Thank you so much!!