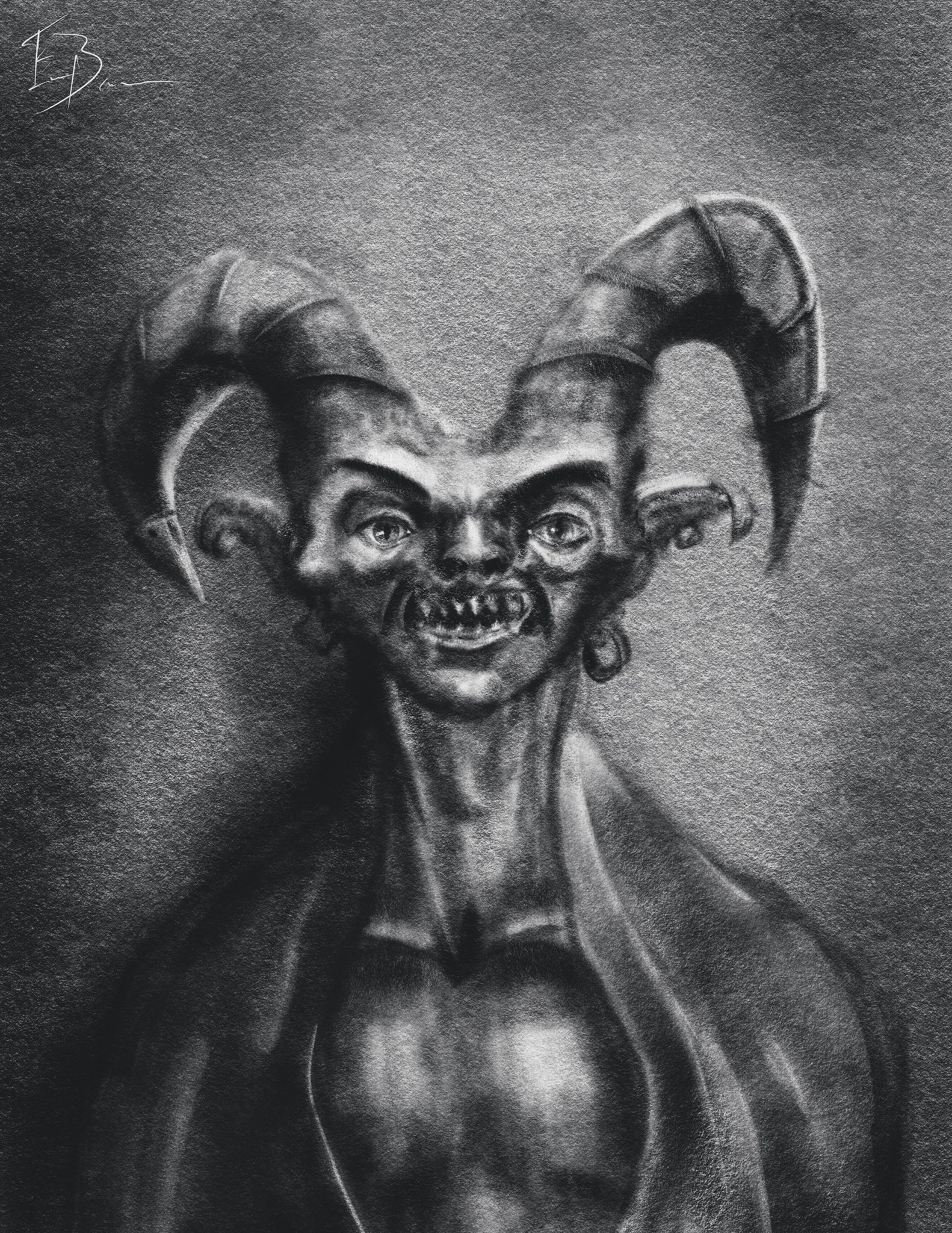 Keblerkath died on the third day of the spring thaw.

It was a miserable, agonizing death. He died tribe-less, kin-less, and friendless.

They'd crushed his legs and gleefully scored a dozen shallow cuts across his body as he'd screamed, roared, and gnashed at them. They left him, crippled and bleeding, hours from the tribe's village, in a section of the woods known to be frequented by wolves and other predators.

Even before the first slinking shadows moved in the underbrush, he knew he was dead. This was a traitors death, and there was no hope of returning home.

These thoughts ran through his mind even as the beasts began encircling him. As they slunk forward on padded feet, he closed his eyes, and in his rage and agony he whispered a name. One that had been whispered to him once by a dying human.

"Zagan," he growled, pouring his pain and hate into the words. "Bargain with me."

The first wolf's jaw closed on his shattered leg. A second closed on his arm. A third sunk teeth into his side. They began to tear. To rip and pull. Keblerkath closed his eyes, a scream ripping free of his lungs. A heartbeat later, heat washed over him. Dry and choking, it took his breath away mid-scream.

"A pathetic goblin seeks audience with me?" a voice behind him asked, incredulously. "Well, this is certainly a first. Make it good you worthless rat. What do you want?"

Keblerkath's eyes shot open, even before the deep voice was done it's sentence. He sat up, and spun around to face the speaker. It was some type of devil - covered in wounds that wept blood, with too many eyes and too many mouths. Horns and bone-like protrusions sprouted from the creature's head and at every joint in it's too-many-jointed limbs.

"To live. To have power. Power to return to my tribe, and make them pay. I will rule them, and once I have them, I'll rule the other tribes too. All will fear me. All will grovel. " he said, casting his eyes to the cracked and dusty red earth below him. The thing he bargained with was too much to look upon, and he knew the price would be terrible, even as he asked - but he would do anything for this chance. Pay any price.

The devil chuckled. "Your soul will be mine. You will do as I instruct, when and if I give you an instruction. You will not question it." he paused for a moment, before continuing, "You will also make them swear themselves to me. Every single one of them. For this, I will grant you your wish. You will be changed, goblin. Those who sign a contract with me are always changed. If you agree to this, I will return you to the forest and the wolves. They will kill you, but this is necessary. The change requires death. It requires pain. Do you accept these terms?"

"Good." the devil said, grinning as it's hands extended towards him. "This will be painful." it said, two claws sinking deep into his skull. Fire lanced through him, and he was screaming again.

And then he was back in the forest. Wolves ripping at him, until blackness swallowed him and his screaming finally ended. It was not a quick release.

When Keblerkath woke he felt rejuvenated. He felt strong. Before he even stopped to consider if he could, he found himself standing up. Shocked, he looked at his legs, which had before been so badly broken and crushed. They were inverted now, like those of the wolves he'd been attacked by. His once green skin was now dull, and marbled with grey. He was taller now, though not as tall as a human by any means, and as he raised his hands to his head, he could feel two great horns, curling back from where the devil had plunged it's claws into him.

He walked awkwardly to a nearby stream, getting used to the changes made to his body, and he glanced down. It was a sluggish stream and though the reflection as imperfect, Keblerkath felt - and saw - a vicious smile spread across his face as he gazed at his changed self.

He laughed harshly, as he turned towards the direction of his tribe's village. 'Tonight will be a night of blood', he thought, grinning, fixing the image of his reflection in his mind. 'A night worth the price.'

According to the Bible, What is the danger of not spreading the Gospel of Christ worldwide as you do today?