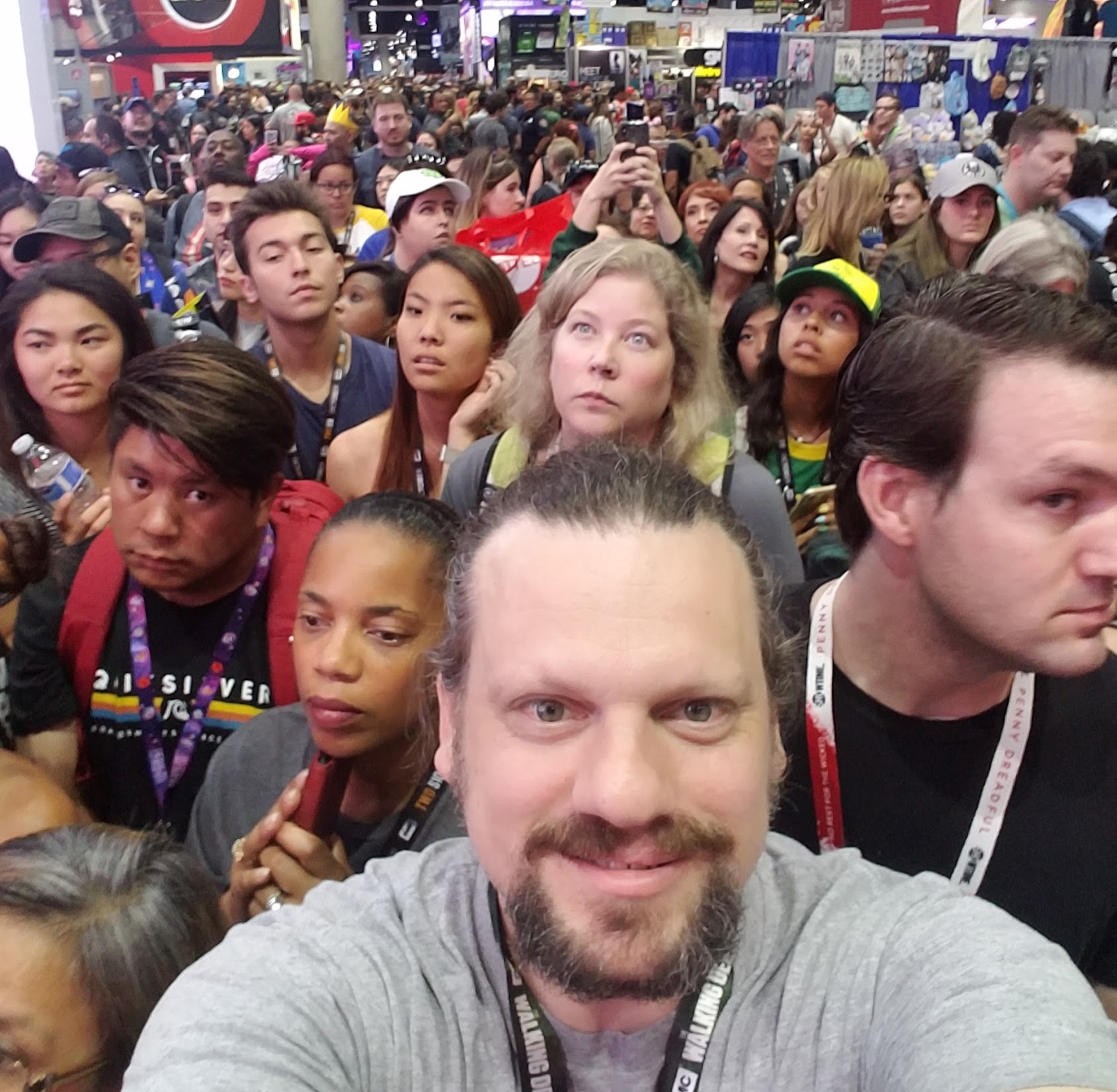 Just got back from the con!

We had a great week in San Diego this year, but boy was it exhausting. I think this must have been the busiest year yet. We sat for 7 hours trying to get wristbands for Hall H for Saturday, but they ran out just before they got to us. We didn't even bother trying to get them for Sunday.

Instead, we ended up in Ballroom 20 for most of Saturday and walked the floor on Sunday. It would have been nice to have gotten into Hall H on Sunday because Supernatural was doing its final panel (since the show is ending). In the end, it was pretty awesome though because I got a nice surprise.

I was walking the floor when I decided to take a quick stop in the bathroom at the back of the convention center. When I came out, I was practically mowed down by fans because the cast of Supernatural were on their way in to sign autographs. I ended up stuck in a mob of crazed fans for about an hour, so I went ahead and took the following video:

As you can see, I wasn't going anywhere.

The crowd was insane! It made it worth missing the panel though. I got to see the entire cast up close and personal.

Like every year before, I stopped over at the Sideshow booth to check out some of the amazing sculpture work.

These guys are the best in the business as far as I'm concerned.

Every year they always have a new selection of amazing work on display. I'd probably never buy any myself (where would I put them?) but I sure do admire the skill.

My current favorite show, The Orville, had an awesome and hilarious panel this year. While people were lining up to ask questions, a whole team of aliens came out to intimidate the questioners as they stood near the mic. This just made my day.

The audience were losing it. It was so funny! With each new person that walked up to the mic, the aliens (Moclans and Krill) got closer and closer to them. As you can see in the above pic, they are practically on top of him at this point.

It was so funny, Seth Macfarlane had to actually tell them to back off a little.

I won a full Zbrush license!

This was the most incredible part of the whole trip. The company Pixologic had a booth set up right next to my buddy's booth. They were running a contest where you had to take a picture of a little pin they were giving out somewhere at Comic-con.

The rule was simple. Post an image on instagram or twitter with the badge, and a zbrush tag. If you are picked, you win a prize! Well, it turns out that hardly anyone was doing the contest, so just about everyone who entered won. The prize was a full perpetual license of Zbrush 2019, valued at around $800.

I've had a really disgustingly bad run of horrible luck this year so this just made my month. Thanks for stopping by folks. Much love!

Hope you have enjoyed the con very much nuthman. And its nice to see you are using tribe tags, specially neoxian 😊

It was awesome! I am really tired, but had a great con.

You do such exciting stuff dude. I bet that was wild #jealous 😁

This is our favorite thing that we do every year. We always have a great time, but boy is it exhausting!

Do you know that you can earn NEOXAG tokens as passive income by delegating to @neoxiancityvb. Here are some handy links for delegations: 100SP, 250SP, 500SP, 1000SP. Read more about the bot in this post.

Great, it is one of my dreams to attend one of those conventions, they should have a great time in that environment, and this is reflected in your post; the images are super, I would like to see Catwoman complete;)

You should go if you get the chance! It is a really fun time. Lots of nerdy people just being themselves.

WoW seems you enjoyed it so much ...

Wow,,congratulations for the zbrush win.
I hope you enjoyed a lot.

And thank you for the wonderful support. 😀👍

wow - great photos!
And the ZBrush license you got, congrats, that is radical!

Yeah, my wife won a license as well.. it seems no one was doing the competition but people I knew!

Your mighty patience got you to Hall H. I wish I did but I had almost a dozen panels I didn’t want to miss. Those get packed too but the wait is an hour, more or less.

Now the con is over, it’s time to recover. I will have to check out the booths you mentioned. Exhibition Hall is crazy!

We actually did not get into hall H. We were in line all day but they ran out of wrist bands. We ended up in ballroom 20 which was cool too.
At least I got a tan sitting out in the sun all day!

@ocdb is a non-profit bidbot for whitelisted Steemians, current max bid is 10 SBD and the equivalent amount in STEEM.
Check our website https://thegoodwhales.io/ for the whitelist, queue and delegation info. Join our Discord channel for more information.

Yeah! It's my favorite time of the year.