Putin vs. Trump: The Dangerous Reality of the New Cold War 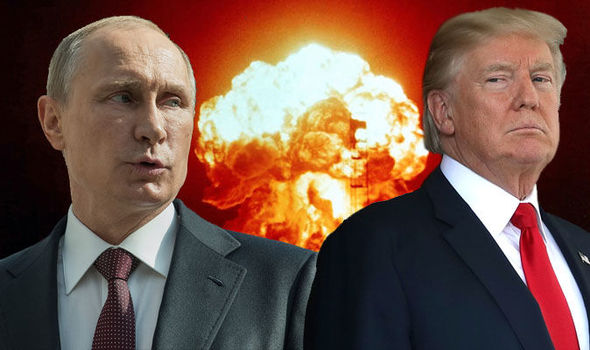 On September 5th, RT ran an article quoting Russian President Vladimir Putin as saying he offered Donald Trump the opportunity to buy some of Russia's hypersonic missiles, a technology the US does not possess. Trump reportedly turned down the offer stating the US would design its own. It's unclear if Putin was making a serious offer or if he was just trolling, though he seemed serious when he said that selling such a weapon to the US would "create balance."

On one hand, I think its clear that Putin was trolling Trump because he does it often and he does it well, but on the other hand there is a deeper message he's trying to convey and one that I think was clear to those who are in a position to interpret such a message: the US is outmatched and has no defense against modern Russian weapons. It's a clear warning to stop escalating tensions before things spiral out of control.

Putting aside the technological differences for a moment, let's look at the psychological differences in which Russia and the United States both perceive war. Throughout history Russia has been invaded and attacked on its own soil multiple times, the most horrific of which was the Nazi assault on the USSR from 1941-1945. Russia is right to feel slighted when the world doesn't recognize their role in World War II as it is one of the most incredible stories in all of history. At the cost of 27 million lives, Russia beat the Nazi juggernaut all the way back across Europe and decimated it at its home base in Berlin. The legacy of that battle is as firmly imprinted on the Russian psyche as it is on the inner workings of the country as a whole. The Russian people today - despite the ridiculous media propaganda of being "aggressive" and warlike - fear war more than anything else in the world. They have no illusions about it. They don't view it as something "cool" and heroic. It's hell and Russia will fight a war for one reason and one reason only: to survive.

The United States on the other hand has never had to fight for its own survival on its own soil. War is something we do on the other side of the world to people who are not like us and our citizens are safe from attack. With a ridiculously bloated military budget we have the leeway to behave aggressively, arrogantly, bullying countries with smaller militaries into doing what we want. To the USA, carpet bombing is a negotiation tactic. War is a video game. War is "cool". And real war will never happen here. When Donald Trump sends out inflammatory tweets like "Little Rocket Man" and "fire and fury", it denotes a deep insecurity and a lack of confidence in one's own power. Someone like Putin understands this and knows the risk in playing one's hand too soon. Hence his insistence on keeping cool no matter the slight, despite the numerous generals trying to cajole him into nuking the US and being done with it. Fortunately, Putin fully understands how catastrophic such a war would be but his patience is slowly wearing thin.

Despite the accusations that Trump is Putin's puppet and that he's doing Putin's bidding, no other US president has done more damage to the relations between the US and Russia and brought us closer to the brink of war than Donald Trump. From increased sanctions (itself an act of war according to International Law) to expelling Russian diplomats in the US (prompting a similar counter response against US diplomats in Russia) to arming anti-Russian neo-Nazis in Ukraine (something even Obama was afraid to do for fear of starting a war) to interfering in Venezuela (a Russian ally, prompting Putin to protect his interests by sending Tu-160 nuclear bombers to Venezuela, a very close striking distance to Washington) to launching attacks on Syria and killing Russian soldiers (prompting Putin to warn the Russian people to prepare for war) to escalating tensions with Iran, another of Russia's allies. Whether Trump lied about wanting a better relationship with Russia or this is his attempt to silence the accusations of being a puppet, he has brought us to a point that many experts have called "more dangerous than the Cuban Missile Crisis."

Meanwhile, anti-Russian rhetoric in the US has exploded, reaching a level akin to anti-Jewish rhetoric in 1939. The arrest of Maria Butina, who seems to have been an innocent girl hoping to help repair relations between the two countries, has left three million Russian-Americans afraid that they too may be targeted. This also puts the hundreds of Americans living and working throughout Russia in danger, though Putin has said he has no intention of holding them accountable for the actions of the US Government. Brilliant Russia expert Professor Stephen Cohen was once the go-to guy for expertise on navigating our cultural and political differences, even advising past presidents at Camp David. Now the mainstream media won't even have him on unless they can run him against someone who will shout him down and call him names. Instead they wheel out propagandists like Malcolm Nance for "expert" analysis. Presidential candidate Tulsi Gabbard has since been smeared as a Russian puppet for daring to promote peace. This draconian, Orwellian crackdown on free speech has become the new norm in the United States.

A large part of this is because the US is a dying Empire. It's losing its hegemony in the world. Its lost all respect and is more laughed at now than feared. The US almost succeeded in destroying Russia in the 1990's by plundering and pillaging the economy and resources under the guise of "free-market capitalism", killing hundreds of thousands by starvation and disease in the process. The fact that Putin took the reigns away from the oligarchs and has rebuilt the country to a position of power is something the Empire has never been able to let go of.

Now a brief analysis from a technological perspective. One cannot really understand the true power and might of nuclear weapons until one sits down and reads about them. The bombs dropped on Hiroshima and Nagasaki were 15 kilotons and the damage they did was catastrophic. These bombs were dropped largely to send a message to the Soviet Union and it has since been revealed that there were military plans in place to nuke every major city in the USSR while they were still weak from the war against Hitler. Then in 1961 Russia detonated the Tsar Bomba (code name: Ivan), a 50 megaton monster. People 62 miles from the blast site suffered third degree burns from the heat and the shockwave was felt six hundred miles away. The Hiroshima bomb was a firecracker in comparison.

Now Russia is in possession of the truly terrifying 100 megaton torpedo. There are no words, no graphs, no charts, no analysis that could imagine the devastation such a weapon could cause. The most powerful warhead the US has at its disposal is 1.2 megatons. The website Nuclear Darkness shows how quickly smoke from the fires produced by these weapons would engulf the whole planet: less than half a month. I think the message of danger Putin has been trying to convey is more directed at waking up the American people and the generals in the Pentagon. He knows the psychopaths in DC are locked on their course and are determined to take the Empire out with a bang rather than allow it to fade with a whimper. This is what individuals like Professor Cohen and Tulsi Gabbard know: that one can be a patriotic American and still recognize that the US Government is out of control and is more concerned about its own interests than the interests of the American people. One does not have to be a "Putin apologist" to recognize that he has the advantage, that he's the only one trying to hold this trainwreck together, and that NATO's movements of armaments in Europe as a psychological replay of the Third Reich is one of the dumbest strategies in history. Those are simply facts, whether one chooses to face them or not.

I don't believe Russia will be the one to start a war. Russian artillery is designed for second strike retaliation, not first strike offense like the US, which does give them more of a survivability factor in battle. While it is possible that some accident could take place in Syria, Venezuela or Iran that could trigger a larger conflict, Russia will only launch an attack against the continental United States if the US launches such an attack on Russian soil first. Could that actually happen? Russia certainly believes that it's more than possible and has taken steps to prepare its citizens for such an outcome. Americans still have the attitude that "it can't happen here." As long as we stay on this path and we allow the current vocal majority to control our politics and our thinking, it very well could. Beyond that, I wish I could provide a solution.

There's an old saying: "Russia does not start wars. But she does end them." If war breaks out there will be two shots fired. The first strike and then the retaliation. There won't be a third.