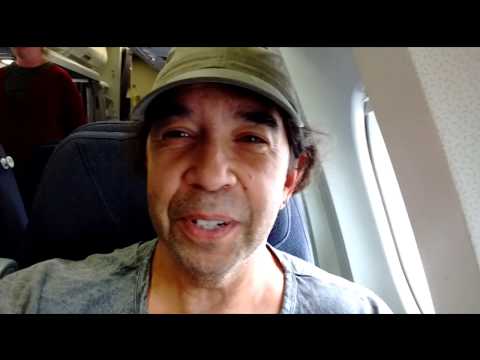 Has anyone traveled Norwegian air recently? I could be wrong, but what do you think??

Despite what I wrote last night, I opted to shower this morning. Early. I had three alarms set. Didn't use any of them. I was awake and out of bed way before 04:00. I got everything done, including the shower.

This is turning out to be an expensive trip, but it could have been more so. More on that later.

I considered using one of the car services, Cabify, or even My Taxi, which has changed its name to Free Now. Need I even get started about the word "Free"? But, I decided to catch a regular taxi. €30.00 to the airport. This might be normal for all I know. I live in a vagabond bubble. I estimated 20 or 30 so I was prepared. Worth it, quick ride. Door to door.

So I get to the check-in desk for my flight on Norwegian air. I has lightened my backpack to 8.5 kilos, that's less than 20 lbs. Nonetheless the guy told me it was too big and I'd have to pay to check it. I swear I got more weight allowance on other airlines. I think the guy was trying to stick me up. Because the big bag wasn't 20 lbs., he had me put the smaller bag on the scale and calculated the weight of both bags!

This has never happened before, not even in America... (or on American.)

He went to work on his keyboard. And then led me over to the check-in counter. My boarding passes had been printed and were handed to him. He checked my bag. No charge. And advised me next time to pre-pay my bags on the website.

I don't want to tell you what I'm thinking.

My new "friend," who did seem like a cool guy even before he hooked me up, told me that he told his colleagues that I'd already paid online.

But what do I know? It's all in Spanish. And I'm not good enough to understand.

It seems to me that the airlines are more in the business of transporting luggage than people. You don't have to feed luggage. Luggage isn't unruly, demanding or crying when the pressure changes. €160.00 comes to about $180.00. That's a pretty good wardrobe, new backpack, maybe. But certainly not worth shipping 20 lbs.!!

So I'm through the check-in. Through security, minus my coconut oil... over the contents limit. I don't argue. I'll know next time. So much I will know, "next time."

No intrusive, invasive x-ray machines here. I could keep my shoes on, but remove the belt... and ankle weights. Aside from unpacking the laptop and emptying my pockets, it was smooth sailing.

I'm in an E seat, in row 7 for the jump over to London, and an "A" seat... (window) for the leap across the pond. E sounds like a middle seat, unless it's a bigger plane. I don't foresee any delay. Not yet anyway. I am cautiously optimistic.

I'll have to go through security again at Gatwick.

Speaking of security, I didn't get questioned as I did last time I left Spain. Maybe because they were too busy trying to up-charge me. I did however have to go through passport control between terminal D and B. No questions there. Dude stamped my book and said, "vamos." Don't have to tell me twice.

The restrictive baggage policy has soured my first Norwegian air experience, although I am grateful to the dude and Universe for the consideration. I shall not look this gift horse in the mouth, at least in public. And that means this forum. Perhaps it's already too late.

From the boarding line we board a shuttle bus. Eeesh! The airplane is parked in the middle of the tarmac. This reminds me of Thailand. Norwegian doesn't rate a proper gate. Kids are seated behind me. Old enough to speak precosiously, and loudly. And be annoying. Hopefully they, or I, will sleep.

I did sleep, between two women who live in Florida. Tampa on the left, Miami to the right. The kids behind me were quiet. Occupied and pacified by technology. Norwegian air charges for its drinks and snacks. Of all the times Not to have trail mix with me. No matter. I don't usually eat on 90 minute flights. It was a smooth flight. Good landing and we didn't have to get out on the tarmac.

The handoff from Spain to England was smooth. No rush, no hassle. I went back in time one hour, but I still need to confirm the local time. I stopped into Joe and the Juice, a hipster spot I first dug in Chelsea... London. A place where the staff calls me "man," like back in the day. "Sir" doesn't suit me.

"For the first time ever, I was first to the gate. I felt like I won something."

I don't feel like a sir. I'm surprised there's a JJ in the airport though. It sounds like a nightclub in here. The type I'd go to, to chill. I had my first tea of the day, and a sammich. £8.00 sterling. Grateful for this card I carry. When they sponsor me, I'll mention the company.


Gatwick has decent wifi. Sign your details away for access. Luckily my details are as vanilla as they come. Nothing outstanding.

I keep expecting to hear Spanish. I'm nearly thinking in Spanish. Meaning, I'm forming sentences in my head, in Spanish.

Wifi here is not so decent after all, he writes as the wifi connects... or so it says. It can't be that bangin' when thousands of people are using it at any given time. Nope, it ain't workin.

So I'm at this diner in the airport. I might add, before I go on about this, that airports have become shopping malls. In case you don't travel, or haven't noticed. Passengers are literally routed through the duty-free shops on the way to the gates. It can be quite disconcerting if one is late for a connecting flight.

This is great if you're a shop-aholic, or need, (or want) to grab a meal during, for example, a six hour layover.

"I pre-ordered a meal and it was the worst in memory."

Anyway, that bloke taking care of this section, probably thinks he's giving me space. I am likely vibrating that way. I was gonna passive-aggressively complain here, but now that I think of it, it is best for me to send a request. I'm almost ready for a Guinness before I settle up and head out.

Actually, there's still over an hour before the gate is announced, so I might as well chill for at least thirty more minutes here.

Not the best Guinness I've ever had. Actually, the 1906 Estrella Galicia is better to my buds.

For the first time ever, I was first to the gate. I felt like I won something. Some people had they're bags re- and probably re-re-checked. I'm psyched to be on this plane. I checked the route from O'hare airport to Matt's place. Straight shot... almost an hour by train or cab. I've got some USD, but I don't know the fare. Do I need change? I think I have change.

Anyway, I'm in the back-ish of this plane. I got on early. Group C, is the first group after priority and, whatever comes next. So I'm settled. My seat mate smells like he's been drinking. Comes in like he's home. Plops down, ready for a challenge. More on that later.

By the way... no soreness from the workout yesterday. Good day for a rest.

Exploring the revolutionary Bitcoin digital currency. It doesn't need banks or to be printed. It can be transferred in a second to anywhere in the world. With global financial instability in the headlines daily, more and more people are taking their money away from the banks. Is Bitcoin the only way forward? Magic Money paints a future where control of our money is taken away from global institutions and given back to us. Eye opening!

Norwegian air is either struggling, or it's the model of the future. Everything is for sale. I pre-ordered a meal and it was the worst in memory. There are several empty seats on board. There usually are on international flights. I won't be flying this airline any time soon. There's no value. I've spent less on a flight and gotten more.

The staff is very helpful on this flight. I must give them that. It's not their fault the airline has such policies. I doubt I'll need to go from Madrid to Chicago again, but if I ever need to fly Norwegian air, I'll be prepared.

Signing off, from Chicago.