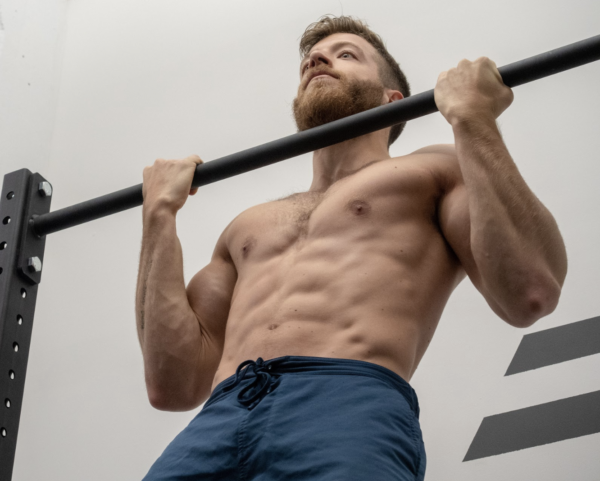 Ok, it is actually chin-ups as someone pointed out not that long ago. I was unaware there was a difference until that point but now that I have been educated what I am doing outdoors these days is actually called a chin-up, not a pullup.

Here is the difference.

I wish that was me in the picture. I will never have noticeable abs unless i am flexing and standing in a very specific position because I refuse to stop doing my favorite activity: booze.

A "chinup" is where your palms are facing you and this is also known as a supine grip. You can go close-grip or wide-grip, but I haven't really notices much of a difference in difficulty unless you go really wide grip or really close.

Again, not me in the picture and likely never will be for the same reason I listed above. With a pullup your hands are facing away from you and your hands are supposed to be slightly wider than shoulder-lenght apart. Your biceps are not as big a part of the equation when doing a pullup and for me and many other people, even people in far better shape than I am, these are considerably more difficult to do.

Despite being capable of bench pressing my own body weight, I can barely do 3 of these.

Now on to my progression:

A few weeks ago I abandoned my gym membership (or suspended it, as the gym was very willing to allow this without penalty) because for reasons that are beyond my understanding, additional covid regulations were placed on all gyms in my area. It was already a massive pain in the ass to use the gym so when they increased the regulations the wait time to get in and the amount of scrutiny you were placed under once you got inside as well as a time limit made going to the gym an exercise in frustration.

Therefore, I decided to switch over to just running and doing calisthenics.

On my first day of doing chinups (I called the pullups originally, incorrectly) I was barely able to do 4 correctly and the last one I did to get to my embarrassing target of 5 involved kicking of my legs and looking like a jackass in the process.

In the past 2 weeks I have had only 1 or 2 cheat days where I didn't do any. I am happy to say that just after a few weeks of doing as many as I can in a row and aiming for 30 total, I am easily able to do 5 sets of 7.

Now this isn't going to win me any awards any time soon but I am also noticing that I have much greater control in my ups and downs and I am also able to lower myself to the ground very slowly on the last rep.

This almost certainly means that I am strengthening parts of my body that I had previously not worked out at all in the gym because I didn't know how to. According to what I have read this involves muscles in your back that are quite difficult to isolate and the entire chinup procedure is known as a compound exercise.

My eventual goal is to, in another 4 or 5 weeks, to be able to do reps of 10 with relative ease. When this happens I will be in the top 25% in the world because I recently discovered that around 75% of all men are incapable of doing reps of ten.

Pullups on the other hand, remain embarrassing for me :)

Have you gone through a similar sort of progression in your own fitness goals? I'd love to talk about if if you have!