Foods to avoid during a weight loss attempt 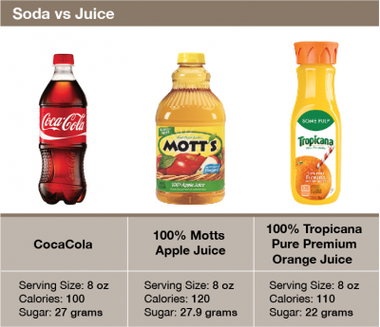 Some of these are quite obvious and others not so much. I think everyone knows that you shouldn't be eating a Snickers bar when you are trying to drop some pounds but a lot of people wouldn't think twice about eating 2 bananas in the name of a healthy diet even though these two things contain roughly the same amount of calories and carbs.

We all know that natural foods are better for you, but some of them, during a weight loss attempt, need to be cut down on, or altogether eliminated.

It's fruit right? It has to be good for you right? It is in theory fruit, but no, it is not good for you and while it likely contains less space chemicals than Coca-Cola, the presence of produce on the bottle does not necessarily make it good for you.

The fact of the matter is that most fruit juices have very little in common with the fruit they are associated with. You would never think twice about eating an apple, but would you eat 6 of them? Because that is what a bottle of apple juice has in it. If you don't believe me crush up some apples, strain it, and see how much "juice" you end up with.. It isn't very much.

Most of these juices also will have added processed sugar in order to make them more appealing to consumers and this is just wrong. I am actually very surprised that there is not some sort of educational program about the dangers of fruit juice but instead everyone is focused on sodas even though our "all natural" pals there are actually worse for you.

Some juices don't even contain much of the type of juice that they claim to, and substitute something like grapes instead. Basically, you are being lied to by juice manufacturers. When losing weight, avoiding fruit altogether is probably the best way to go but if you need a sweet "pick me up" eat the fruit, don't drink it.

I'm using the word product to refer to a wide variety of things including and especially the deep-fried versions of them. While cooking oil on its own isn't necessarily bad for weight loss (there are many schools of thought that say that the right cooking oil is actually beneficial to this end), most of the times the problem is that we are compelled to eat a LOT more of them than we should and in the case of tater tots or some types of fries, a batter of some sort is also added in order to enhance flavor.

Ideally, if you are trying to lose weight fast potatoes should be avoided altogether, but if you need to fill that potato void (and I am one of the people that feels this way), it is much better to eat whole baked potatoes than it is to eat any of the things that are made out of potatoes.

There are some studies from well-respected, non-biased sources that show that potato chips / crisps are the number one food that has contributed to weight gain and obesity. You can see one such peer-reviewed study here

I spent most of my life being programmed to believe that granola bars are good for you and they were a healthy alternative to chocolate candy bars. This idea couldn't be further from the truth but many people still seem to think that this is the case. Sure there are oats and nuts and what not but the sneaky peeps over at Nature Valley and many other companies put a bunch of sweeteners in there as well including the worst one, high-fructose-corn syrup.

While you are going to get some health benefits out of these things the bad far outweighs the good because many of these have just as much calories and carbs as your average candy bar. Since carbohydrates and especially sugar are the worst things you can consume on a diet, granola bars need to be given the axe.

There are many caveats in dieting and a lot of misinformation out there and you can't depend on the manufacturers or even the people they pay to "study" their products' affect on your health to ever tell the truth. You need to be vigilant if you want to win this battle but if you put in a little effort I think most of us will find that the things we consider to be healthy are actually the opposite of that.

i've felt betrayed by claims of healthiness many times before but none felt like so much of a Judas moment than when I learned juice is bad for you.

yeah it was a real shocker to me as well. When I was a kid i don't recall us ever (my parents included) looking at nutritional information. I'm not even sure if it was on the boxes.

well i'll be dammed. Juice is full of sugar, who woulda guessed. It's official. Juice is worse for you than beer is.

well i know you are just being silly but juice is probably still better for you than beer. BUUUT if you took a multi-vitamin with the beer you would likely have a very valid point.