Coming from a guy that doesn't believe in Democracy - Why the George new voter law stinks. 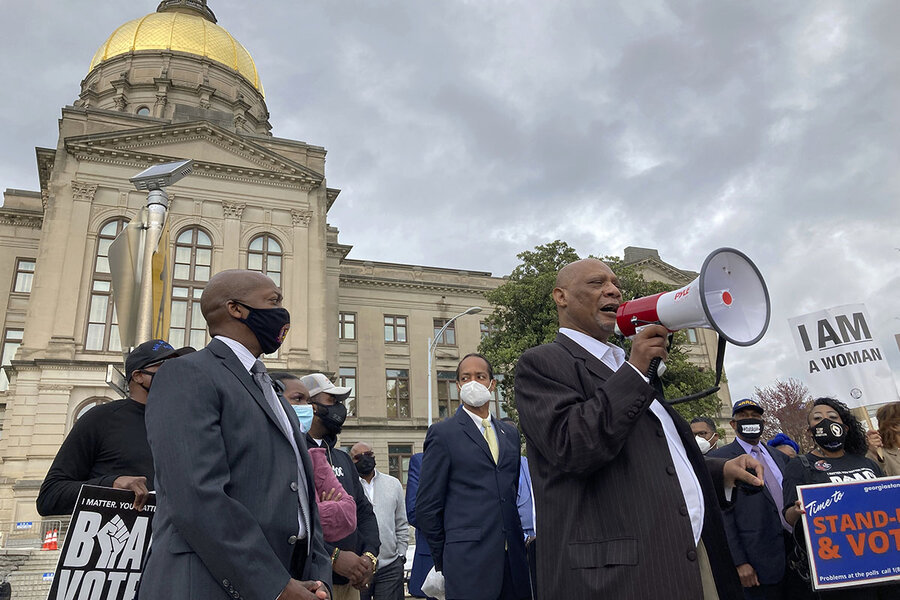 I haven't spoken out on this yet because I wanted to look into it further, but Georgia's new voting law is unjustifiable and accusations of racism are not unwarranted.

And this is coming from a guy who doesn't even believe in democracy.

Yea, you heard that right. People always say "come again?" as if it's the most insane thing they've ever heard. But I'm dead serious. More people voting is not good. Easier voting is not good. And, in general, there's nothing special or morally praiseworthy about the voice of the majority. If anything, majoritarian tyranny is among the greatest threats to our liberty, and all this "get out the vote" nonsense is morally and civically irresponsible.

This is particularly true in a society where straight-party voting is the standard. If you haven't taken the time to inform yourself, you have no business voting. But that's exactly how it goes down. The Average American can't even name their congressional representative. Yet they'll go to the polls and bubble in the circle "R" or "D" without a single shred of care.

THAT'S NOT A GOOD THING!

It's just not a good thing for politically oblivious citizens to vote in ignorance and wield their vote so irresponsibly. And let there be no mistake, attempts to expand democracy are just that. They're trying to increase voter participation among the politically apathetic and uninformed. Which is always a bad thing because an uninformed vote is always dangerous.

That being said, I've kept my mouth shut about the Georgia law before now because, first, as stated previously, I don't like to vote, speak, or write unless I've taken the time to inform myself as best I can. And, second, because I low-key (high-key) don't even believe democracy is a good thing, I wasn't jumping at the opportunity to condemn voting restrictions.

A lot of the stuff I initially read was:

I don't see increased democracy, unto itself, as some unquestionable moral positive. So I was not swayed by headlines that (apparently) put the concept of democracy on a pedestal. I don't care.

So why am I here now speaking out against the new Georgia voting law?

Because, upon closer examination, some of the accusations of (indirect) racism really hold water. And, though I don't believe democracy is a great thing and actively believe fewer people should vote, I don't think the government should deliberately target certain demographics for arbitrary exclusion.

And let there be no mistake, the new law in Georgia does just that.

What really persuaded me was reading the various ways in which the new law arbitrarily targets longstanding African American churchgoing voters.

The new law undermines "Souls to the Polls" church-bussing traditions that go back for decades and are practiced almost exclusively by black, Christian voters.

If there's one thing I hate even more than democracy, it's arbitrary government action. There's just no reasonable, justifiable reason for the Georgia legislature to support these particular measures unless they know that such measures will curtail African American voters specifically.

It is well-documented that Sunday bussing to the polls is a long-practiced black, Christian tradition. It's well-established that predominantly African American districts have longer voting lines and that black church-groups hand out refreshments on voting days.

And don't give me that "it's necessary to protect the sanctity of our elections from voter fraud" nonsense in this case. Because the black, Christian community has been doing this stuff for generations and it wasn't a "threat to democracy" until right now. These aren't some new, nefarious voter-fraud schemes. They're long-held practices as American as apple pie.

And this isn't even touching on how the state can unilaterally strip local voting boards of their power just because they feel like it.

All in all, the new voter law in Georgia stinks to high heaven, and this is coming from someone who doesn't even believe in democracy. I'm perfectly fine with creating additional barriers to voting. But this law isn't about that. It's a partisan power-grab initiated by a Republican legislature. It unapologetically creates arbitrary rules that specifically undermine long-practiced black, Christian voting traditions.

And, while I long for the day that we recognize democracy for the force of tyranny that it is and stop this mad obsession with getting uninformed voters to the polls without question, I cannot in good conscience support any law that so obviously, blatantly, and deliberately undermines democracy for only part of the population.