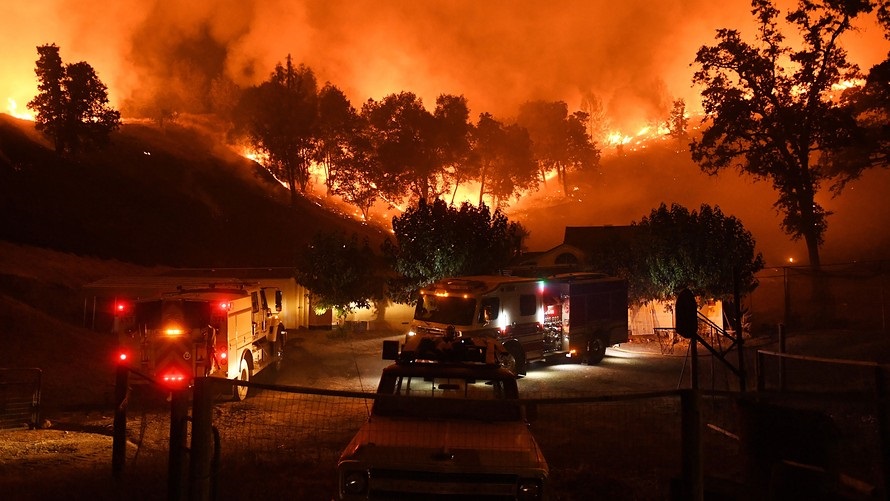 California is burning - literally. By now, you have heard about the devastating wildfires in California. In the past two years, California has experienced the deadliest and most destructive wildfires in its history. The fire season across the west is starting earlier and ending later each year, exacerbated by drought and deadly winds.

Though a natural part of the state's landscape, the veracity of the wildfires has caught many by surprise. The blame game has changed from specific incidents to folks asking if there is not a trend we see that has not been noticed before. Climate change, land mismanagement, or even perhaps something more sinister. News Forecasters asks, what is going on with the California wildfires, and is there some human conditioning we need to be concerned with?

Looking at the inset chart, so far 2019 is not the worst year, that prize goes to 2018, but clearly, California wildfires have been on the increase the past few recent years. That being said, 2019 is far above historical averages since the 1970s. It appears that the California wildfire situation is starting a trend not seen before.

So far, over 6,190 fires have been recorded according to Cal Fire and the US Forest Service, totaling an estimated 198,815 acres of burned land. October through December is still expected to have the greatest fire potential as the Diablo winds and the Santa Ana winds pick up. If you are looking for a U.S. nationwide data, click here. One can see that California is the state at most risk. Click here and here for some interesting interactive maps of the fires.

Some blame climate change. Climate models show that as temperatures continue to rise, the atmosphere and land in some regions, like California’s forests, will grow more arid. This, in turn, will make shrubs and trees drier and more flammable. Some believe that climate change is amplifying fire behavior and fire size. This may be true long-term but does not explain the sudden sharp rise in devastation - climate change doesn't happen this fast.

Others blame government mismanagement. For instance, California’s large and heavily regulated public utilities (PG&E, SDG&E, and SCE) prioritize wind and solar power, leaving little for powerline maintenance and upgrades - thought to be causing part of the wildfire risks. Then there are the issues of land management and cleaning the underbrush - the fuel for the wildfires. California’s politicians are waking up to the connection between forest management and wildfires, although it is too little, too late. Some wonder if California has the money with their budgets that have exploding debt - California ranks 43rd in the country in its fiscal health.

Then there is the issue of demographic change and a housing crisis. California’s political evolution over the last four decades, from a mostly red state to a purple state and finally to a very blue state, corresponds to its powerful demographic trends, driven largely by a social agenda. California has grown into a tale of two peoples. One being Hollywood and the Silicon Valley rich and the other massive poor largely coming via immigration and the magnet from across the country with its behemoth social state it has created. The high cost of living is forcing many to flee into wildfire-prone areas. Many companies are leaving the high tax state along with much of its middle class. This is making the state unlivable.

And what's with all the power grid blackouts? Blackouts have always occurred, but they are getting worse and worse each year. The aging California power grid (see inset chart) is susceptible to causing fires, and hence, preventative power cuts are done during wildfire seasons. We don't have to tell you how this makes life difficult. This has angered many with PG&E is asking customers frustrated by power shutoffs not to target its employees - there have been threats and actual attacks.

The solution will be to harden the power grid. There are ways to make the grid less fire-prone, but they are expensive and slow. This involves tree trimming and placing the power grid underground. All expensive and will eventually need to be paid by the electrical consumer. California ranks 45th by state, in terms of being the worst in electrical costs - another problem for the burgeoning poor in California.

This brings us to an even more sinister issue - arson. A study published in 2017 found that 84% of U.S. wildfires were caused by human-related activity - arson is thought to be rare, but there is growing evidence that this may not be true. What happens when you get an angry population? They hear about a wildfire crisis and think to capitalize on an existing bad situation - "If I can't be happy, why should anyone else? Screw the world, let's tear it down," and become an arsonist against the status quo - suicidal culture. Google "wildfire arson California" and you will find many examples - we feature just one here.

We have talked many times here at News Forecasters about a cultural spinning out of control. Elites know this. Perhaps the rolling blackouts have an additional rationale and are a way to test and plan for an eventual breakdown in society - mass human social conditioning. Worsening mental health, mass shootings, terrorism, and political violence, to name a few, maybe in the cards. Unfortunately, News Forecasters believes that this may become a new norm.