The Devil's Mistress on Netflix 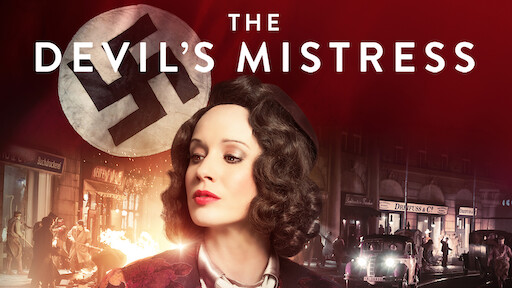 Generally speaking, I tend to shy away from love stories in films unless they are romantic comedies. Even then it is a toss up about whether I am going to enjoy it because they always walk a fine line between being touching and just being cheesy and unrealistic. It is very rare that a love story comes around that ties into one of the most powerful and evil regimes that the world has ever known. I had no idea about this situation with Czech actress Lída Baarová back in the 40's where she, by chance, ended up being the mistress of Joseph Goebbels - who as you may recall was very high up in the food chain in Adolf Hitler's inner circle.

The thing about this film that makes it so much more interesting that other "love stories" is that this one actually happened and it is shown in a way that exhibits the human side of Goebbels, who we all know was a terrible person - but even terrible people have a bit of a soft side that exists in them.

Lida Baarova was already a somewhat famous actress in her home country but one day she hit paydirt by getting cast opposite a famous German actor for multiple roles that were not in her native tongue. Despite the fact that she had to study German and was constantly criticized for her pronunciation, she was so strikingly beautiful (and therefore popular) that her audience and the other actors and directors were willing to work with her and accept her deficiencies.

Her fame grants her access to many admiring fans including the Fuehrer himself and therefore his group of commanders including Joseph Goebbels, who eventually attempts and later succeeds in seducing her. Keep in mind that this was prior to the Nazi's doing all the horrible things that they did and at least according to the film Lida was not given access to this information. Her relationship with Goebbels was purely a romantic one and she had bad feelings about continuing her relationship with him one the Reich started to purge Germany of the Jews. She actually intervened (presuming the story isn't exaggerated) on the behalf of several Jewish actors to save their careers and later their lives. She was also able to secure additional funding for her films via the German government. Of course a great deal of this comes directly because of her relationship with Goebbels and her position as his mistress quickly becomes public knowledge, even known by Goebbels' wife.

The best parts of the film revolve around how even once the war begins and after it is clear the Nazis are going to lose that she doesn't wish to leave her relationship with Joseph and it shows a very human side to him - which I believe even the most evil people have at least of piece of inside of them.

Unfortunately that trailer doesn't really do the film justice but it does showcase that 99% of the movie is not in English so if you have an aversion to reading subtitles this film will not be for you, you lazy person you!

Should I watch it?

I found this film to be very intriguing because of many personal reasons such as being fascinated with World War 2 information. Despite a minuscule budget compared to many Hollywood films they manage to pull off what I consider to be an artful masterpiece and the fact that it is based on real events makes it even better in my opinion. Of course you will have to read it because even though and overdub does exist, it, like almost any overdub, is terrible.

This is one of the best films that I have seen in the past month and therefore I definitely recommend it. The fact that you exit the viewing knowing things you didn't before is just an added bonus.

Me too got the problem with romance genre movies being cheesy and unrealistic. Both Bollywood and Hollywood don't usually work for me. But some gotta be out there, maybe hidden.

That sounds like something I would really enjoy. Gonna check it out today after work (if we have it in my region)... Thanks for the heads up!