There Be Treasure in Thar! 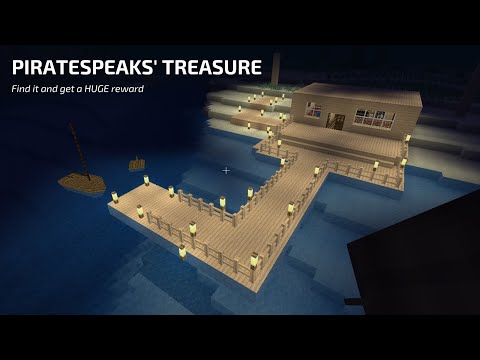 Some of you may know that we're slowly building an awesome minetest game-server in Neoxian City. We're cooking with gas right now. We already have a build battle for people to come in and build & protect their houses and win some battle-coin and neoxag. Details can be found here

Today Capt'n Piratespeaks buried himself somewhere on the server with all the treasure that he had amassed over the years. He wanted to pass his booty onto his cousin Dragonspeaks so that he could carry on his fortune but sadly he lost his way home.

Worried that someone else would find the treasure before his cousin did he sealed the treasure with magic locked in a book, and magic that only Dragonspeaks could unlock. He buried himself in the ground and sealed the passage-way to his final resting place. Whomever finds the book and delivers it to Dragonspeaks will get a BIG reward. Details below

If this sounds like something you'd be interested in taking part in, come in, build a house at get to know our family. There's lots of fun to be had :)

To join the server you must have downloaded a copy of minetest which can be found here: https://www.minetest.net/downloads/ the exectuable will be in the "bin" folder of the download

Please keep your username and password safe especially after protecting your builds. Our server stores those, so you are likely to lose your username if you lose them.

OMG, how am I ever going to find that???

hints ?! I have one hidden treasure would be a pleasure for you to find it.. but then you can prob see through walls.

Maybe in the coming weeks ;)

Aye, dere be treasure all over these lands. I be needing to check this out before many moons pass and the ship has sailed.

I really do need to check this project out as i looks kinda fun. Problem is if it's too fun, i'll not get any work done, lmao