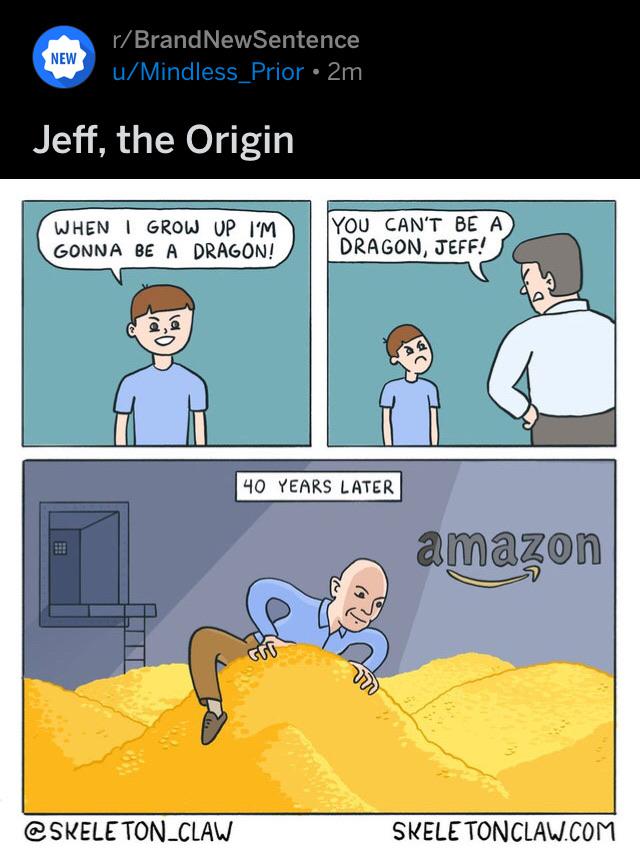 See https://steemleo.com/money/@nealmcspadden/why-does-nobody-understand-equity for the prior post on the subject.

The sitting on a pile of gold is just a fallacy, which I covered in my previous post.

The tweet is kind of interesting. What she is in effect saying is that it would be better to destroy the stock of amazon, and thus the company, in order to spread those resources out to the starving.

Let's put aside the fact that the free market has provided far more than enough food for everyone and that it is government violence that prevents those few starving people from getting it.

It's like there is an inability to think beyond step 1 in whatever insane plan people hatch.

Right, because they don't understand what equity is.

Would it be insane to say that competitors hire people like this to promote shit stories about their competition?

It is the most basic of strategies and the fuel to this fire is the absolute idiocy of the average human being. People thrive on being lead by others because thinking for yourself is not a comfortable state to be in. Especially after being taught, for 12 years, that you cannot communicate in front of a classroom without someone "in authority" delivering judgment on your train of thought.

Perhaps my focus should be elsewhere but if I may comment on your central idea. Yes, a free market is good but then it should be free and we have nothing close to it. We squabble over scraps and we do have a bit more scraps, as commoners, than a 100 years ago, or more but this system mostly reward the corrupt. If you're on top and not cutting throats you won't stay there for long (best explained by Ken O'Keef.)

Those in control are not interested in money any longer because they have a stack so massive it'll reach to the moon if you pile it.

You are given just enough to feel that the system is fair and this combined with constant programming (TV, social media, radio, newspapers, etc.) is less and less.

We are but computers easily reprogrammed by visual input. Those who control the content we see rule the world.

You're right that we don't have a truly free market. But it's still better than the vast historical majority of humanity.

The good news is the decentralized kinds of technology we are using right now are increasing that freedom.

But people still don't understand what equity is.