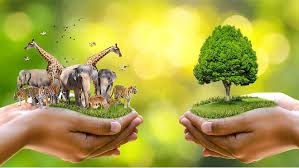 OUR WILDLIFE, HAVE WE BEEN FAIR TO THEM (WILDLIFE CONSERVATION)

One may claim we humans had been doing a great job by killing the wild creatures at will, but we have not really considered their great importance to our natural ecosystem. We have deeply undermined the advantages of maintaining healthy wildlife species and population.
Research has it that climate change is slowly increasing average annual temperatures. One of the most noticeable ways that climate change is impacting wildlife is by disrupting the timing of natural invents. With warmer temperatures, flowering plants are blooming earlier in the year and migratory birds are returning from their wintering grounds earlier in the spring.

I can justify texts contained in the definition of the word 'phenology'.conservation
I have really seen the possibility of adding subscript and superscript
ology is the study of life cycle of living organisms on the and research progress of Phenology. It is commonly observed in temperate climates. e.g, arrival of spring and first frost

WAYS YOU CAN DO YOUR PART TO CONSERVE WILDLIFE

SOME QUOTES ON WILDLIFE CONSERVATION

COUNTRY WITH THE HIGHEST AND LOWEST RATE OF WILDLIFE CONSERVATION

HIGHEST
The researchers looked at 152 countries across the world and how much they were doing to preserve big animals in the wild. The southern African country of Botswana ranked highest of all, doing everything it can to protect its incredibly diverse wildlife, which includes one of the largest elephant populations on the continent.

LOWEST
The Megafauna Conservation Index is a list of 152 countries ranked based on the status of their natural habitats, ecosystem biodiversity, and their country’s efforts to protect wildlife.
Many countries in the Middle East rank low in the Megafauna Conservation Index. This is because of years of conflict in some countries in the Middle East that have destroyed natural habitats and killed off animal populations. The Middle East also remains one of world’s the top hubs for animal trafficking.
Uruguay also ranks low in the index despite having animal welfare legislation. This is because the law still allows the use of animals for shows and circuses. Fur farming and greyhound racing are also still allowed in the country according to a study by the World Animal Protection Organization.
Source