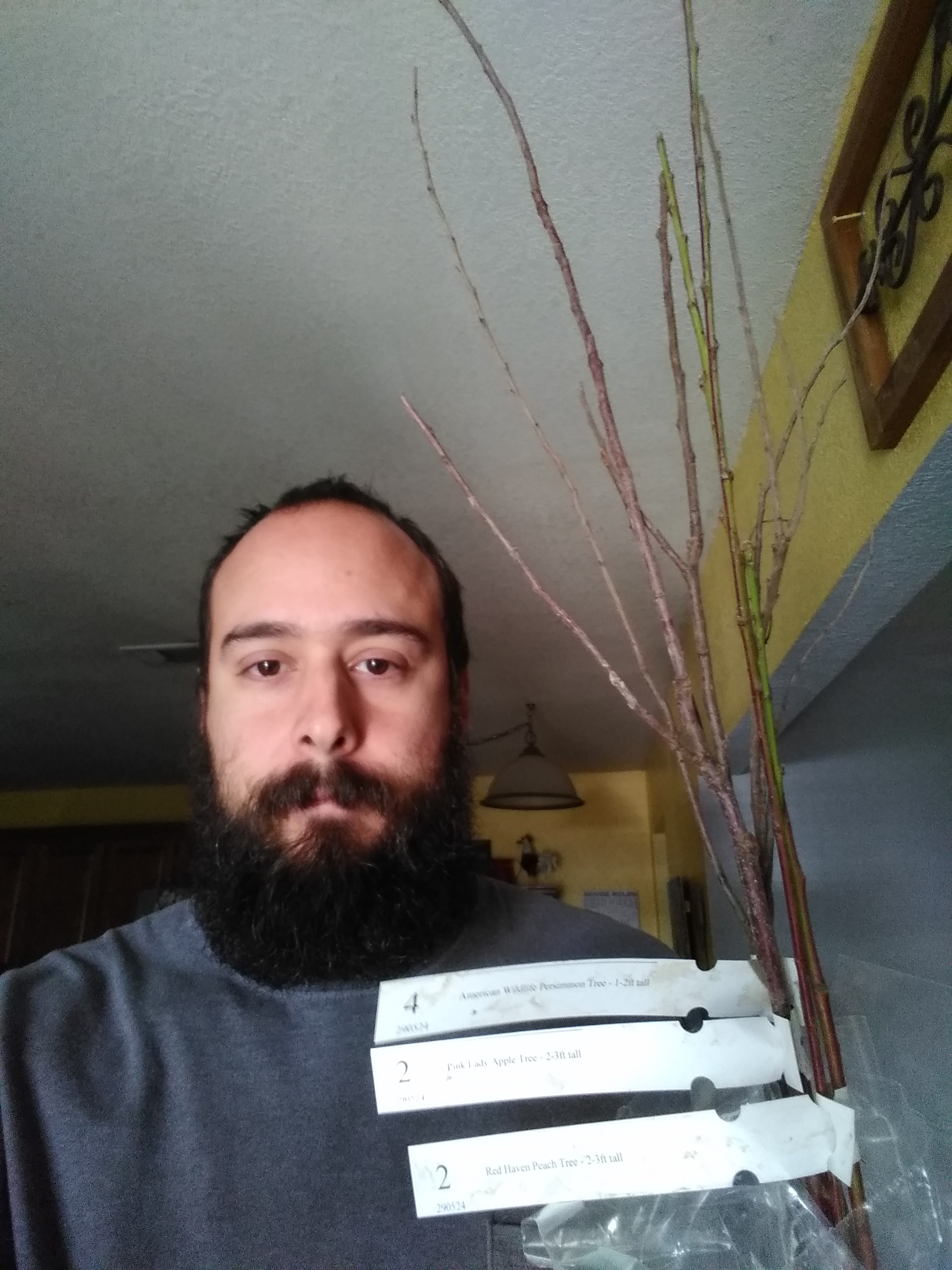 A little while back I took donations for eight new fruit trees to grow here on our little half acre. @riverflows called at the start of the project for a proof-of-tree post, and I just now remembered that I never made one! What a loser!!!

So the order was placed for four native persimmons, two red Haven peaches, and two pink lady apples. I got an email from the nursery that the soil at their place wasn't ready for harvest. Understandably, I waited patiently. Soil takes top priority in almost everything, doesn't it?

A couple weeks ago, they finally came! Now I want to do an update for y'all. Who can guess what the plan was for these trees? Nobody? Cool, me neither. Looking around the yard, I couldn't imagine where to put them. So, while Melissa and the older two kiddos were at her mom's visiting, the little one and I sat and deliberated.

His plan was to use mittens for socks and go jump on the trampoline. Mine was to walk around the yard and see if a plan would reveal itself. Sounded solid at the time, so we went with both plans.

The pink ladies, being Melissa's favorite apple, got planted close to the patio where she will be able to harvest them easily without walking in the grass that agrivates her eczema. Permaculture has a lot of room for cool considerations like that. One of the trees is in the official fence line of the food forest, and the other is an invasive tree that will help establish a need for me to expand the food forest. Sneaky sneaky.

The persimmons were planted in many places. One by the deck in the north part of the yard, someplace where it won't get driven over when I pull the truck into the yard. One got planted where I had a blueberry bush under the bottom swale. One is with the elderberry trees, where it'll become part of a chunk of native understory. The last one is somewhere else. I'll find it when it makes fruit, but my style of gardening says that it is hidden in a place my memory won't recall until then. I planted it though, just not sure where... When you intentionally plant twenty-six trees in a year on a half acre that already had fifteen trees on it and then inadvertently mulch with acorns causing another hundred or more trees to appear, you start to lose track of your trees... I'm calling that a good problem and I think you should too. Those numbers don't count the ~30 trees started by seed. I don't have a problem, you have a problem.

I'm getting very excited for this year's garden. I can't wait to see all the trees with leaves on them. I'm preparing a seed order that should be put in next week when I get paid. I'll make a post about that later. Here's a cool bit to leave you with for the day:

The average American carbon footprint is 48 tons a year. A tree can sequester up to fifty pounds of carbon a year. So planting two thousand trees would offset your carbon footprint for life, as the tree will continue sequestering carbon every year for it's entire life. If that sounds unfeasible, there are other things you can do to decrease your electricity usage like using incandescent bulbs and to mass heaters in your home instead of a heater, or using a clothesline instead of a dryer. These things can save you money too, and contribute in multiple ways to increasing your quality of life. Read all about it in @paulwheaton's book, How to Build a Better World In Your Backyard and Stop Being Mad at Bad Guys.

(I guess I can take credit for sequestering 1300 pounds of carbon a year now. While growing some more of my own food in a perennial way.)

All action for the good of all

Nice! I like that you called losing track of your trees as a "good problem". Seems abundance is going your way!

Abundance is there if you let it in! 💚 I'm constantly awed at the abundance of natural systems.

That was a fun read, I like those mittens for socks. Us adults should do that kind of stuff more often.

Cool style of tree planting, by the way. You got my respect. Both for your style and the fact that you're planting these trees.

Trees are a huge part of my garden. So far they're the first part to go in. I think i have "enough" now, if there is such a thing. That probably means I'll plant another dozen this year lol

But for a while I'm going to be switching my concious efforts to the shrub, herb, and vine layers. So much to do!

All that sounds like a pretty good distraction from the unnatural job to pay the bills ;>)

Exactly! The unnaturalness of the job has been weighing on me pretty heavy lately actually. A natural escape is needed. Quick, TO THE WOODS!

Woohoo, POT!! I still want a persimmon .. jealous. Your food forest is really developing. Good on you for improving the world!!!

Improve the world, and it'll improve you, right? ;)

And around it goes, ad infinitum, beautiful loops of sacred economics.

Love to see your food forest growing abundantly! I do hope they produce well for you!
Here's to growing trees and cutting down our carbon footprint!

Looking at that may makes me realize how much more there is to do. I set up the clothesline in a different spot today, and it's in a spot where it's bigger (more effective) and windier (also good).

Glad all your trees found god and useful homes in the forest. Can't wait for new posts on seeds and plantings. :))

It'll be coming soon. Today we (I) took down the old coop and run as we prepare for the new coop. My friend is giving me her old one that's super cute.

New chooks in the works too!

That is a cute coop! Does it have a people door?

It sure does! And proper roosting bars and nesting boxes too! It's actually a purpose built thing, not a hodgepodge of pallets lol

I love the consideration and more importantly the patience with which you did that process.

Walk around the space, and let the space tell you what it wants planted!

That's how I do everything man. Out here, the land says what to do. I just have a list of things I can physically do if it says it needs that. We're all just stewards.