This is for Saffisara.....Shiny Gun Stuff 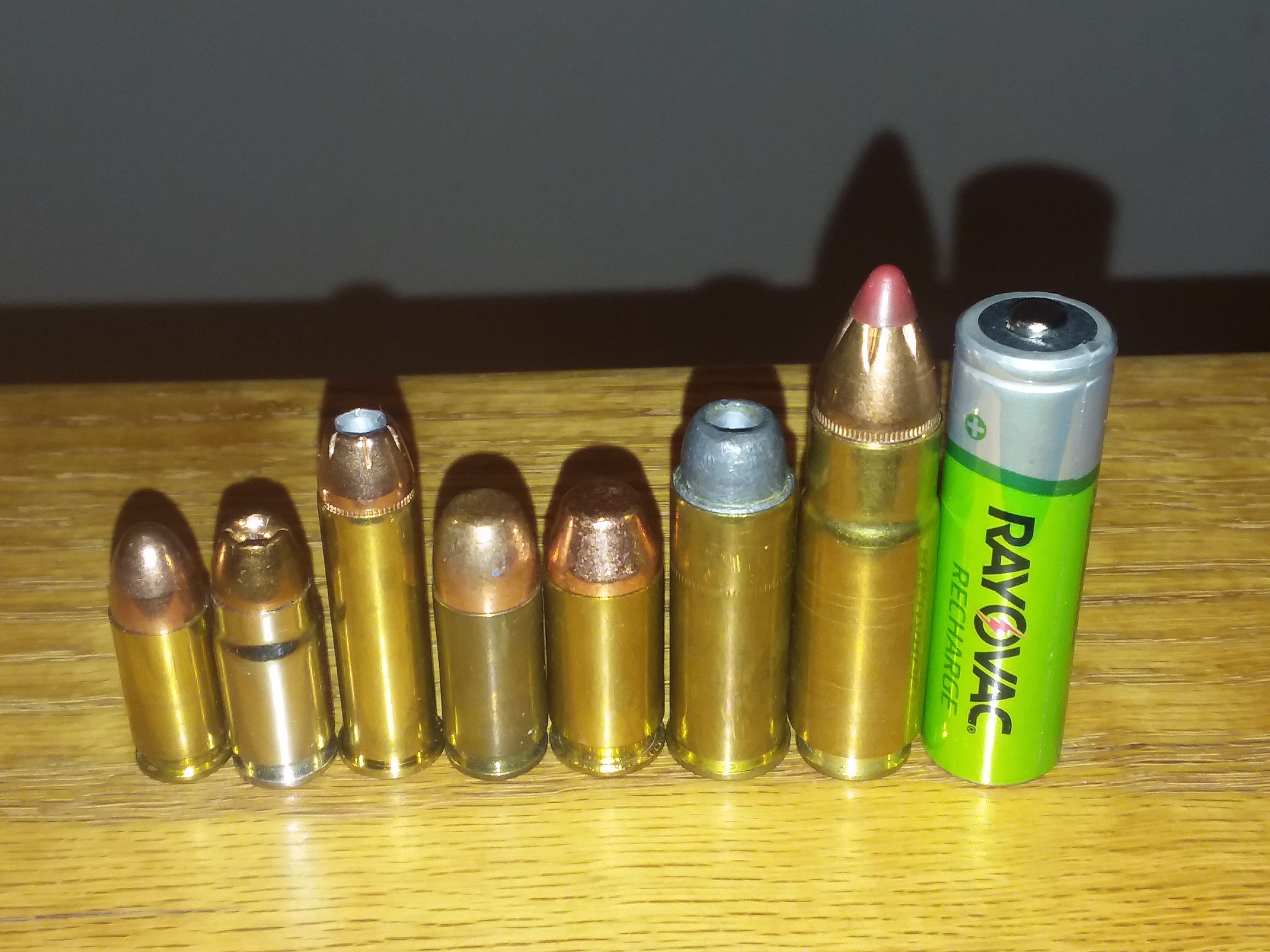 Everyone knows that she is a big silver stacking fiend and by self confession "likes all things shiny".

Either she was feining interest for my benefit OR actually likes bullets because they are shiny as well.

Whatever the case, I decided to do a post about the bullets that go into firearms for Sara.

Lets start off with a row of bullets and a double A (AA) battery for size comparison.

Lets start on the far left and work towards the right.

1. On the far left we have a 9mm. The 9mm and .38 caliber are the same size. One is metric and the other is US measurement. The 9mm short (not shown) is also called .380 which again is the same size.

The only difference is a 380/9mm short has less powder and the brass is shorter.

2 .357 Sig. The .357 sig is also roughly the same size as a 9mm/.38. This round is made for the Belgium made Glock. Notice how the cartridge is bigger at the bottom and narrower at the top.

This is called "necked down". It allows more powder to be put in and increases velocity. The .357 sig and 9mm are both fast rounds and will break the sound barrier when fired.

Notice how the tip is hollow looking (hollow point) this causes the copper clad lead to expand when it hits something hard.

3 .357 revolver round. Revolvers typically hold 6 shots but some hold 5. There are even some that hold 8. A revolver can stand much higher pressures. Notice how long the brass is. Again the copper bullet is the same size roughly as a 38/9mm but there is much more powder behind it.

4 caliber .40. The US police wanted something with less pentration than the 9mm and more stopping power but they also wanted higher capacity so many agencies are trying out the .40 caliber.

5 .45 caliber. Is relatively a slow moving (sub sonic) big round with a lot of knock down power. Teddy Roosevelt, the 26th President of the US, helped bring attention to this round.

The "Rough Riders" a miltary group that Roosevelt was in charge of were fighting indigenous people during the Spanish American War.

The pistol at the time was a .38 revolver. The indigenous people, armed with machetes and natural drugs could run into the US military lines being shot multiple times with a .38 and keep on coming. This allowed the tribesmen to reach the US soldiers and hack away with the machetes.

Roosevelt insisted on switching to a .45 caliber pistol. One shot would hit hard enough to knock the aggressor down and stop them in their tracks.

Because this round moves slow it is easier to supress or make quieter when it fires.

6 .45 long colt was made popular in the wild west days after the black powder revolvers. Is a .45 sized slug but with lots of powder behind it. Some rifles in the old days fired this as well. The tip is solid lead and a hollow point so very little penetration coupled with big mass.

7 .458 Socom. The US Special Operations Command (special forces) developed this round. This is how would @enginewitty say it "One BADASS round". The .458 is once again a slow moving, easily suppressed, huge chunk of metal. If someone is hiding behind a cinderblock wall....the .458 can just knock the wall down. It is just under a .50 caliber in size though it is a shorter distance round. 2500 foot pounds of energy.

I have built 2 ARs that fire this cartridge and sold both. I regret that I did.

Top view. The red is a ballistic tip made of plastic.

8 rayovac battery. Can be fired from a shotgun but would be kind of a silly round to shoot.

10 .410 shogun/pistol defense shell. Has 6-8 lead pellets that are .32 caliber. Nasty round especially in a pistol. I have a pistol that shoots these OR .45 long colt.

12....12 gauge shotgun bird shot. Often used when hunting bigger game such as geese, turkey and such.

14 not shown 12 gauge slug. One Big chunk of lead .729 inch fired from a smooth bore shotgun. Would be effective against a bear, rhino, elephant, maybe even a T-Rex.

You are welcome to read, comment, vote, or find something more interesting.

Very good summary of popular ammunition. Thank you for sharing this information with me. I don't mean to be overcritical, but before someone else spots it, you may wish to edit...

The AR15/M16 is a 5.56mm versus .556.  👀  Just thought I would help out with a little proof reading. I learned, when I managed a one-man marketing office (the one man was me), never to proofread your own work! I use more RCs editing my posts and comments than for any other reason!

As a side note, I carried a .45 Colt while I was in Panama backed-up with an M-79 40mm grenade launcher (replaced by the M203 which was mounted under M16s). I don't believe my Marine Corps uses the M-79 anymore. They were probably either warehoused with other obsolete (so they say) weapons. I always preferred the .45 to that damn 9mm Parabelum.

Thank you thank you my friend for the proof read.

I read it a dozen times and still find errors.

The Army taught me to shoot a .45 pistol in competitions. Was never a 9mm fan.

One of the oldest weapons in the inventory, the .50 cal mod 2. Setting timing and head-spacing was a bitch. Crazy the things one remembers. Straight leg jarhead here. Lots of different billets over the years. Main MOS was infantry (mortars, both 60mm and 81mm). Later in the Army Reserve, Artillery (8-inch SP Howitzers and 155mm SP Howitzers) and a Motor Pig.

Staff Sergeant in the Marines and retired a Private in the Reserves. Stuff happens.

Howitzers...cool. General or private you did the time and got out alive. You have my respect.

As do you. Welcome Home Soldier.

Hi naltedtirt the SHADE tokens are on the way.
Thanks for sharing SHADE
To view or Trade SHADE visit steem-engine.com

What is a shade token??

SHADE is a token about sharing and engagement. The main way to earn SHADE is participating in the Pimp Your Post Thursday shows in The Ramble discord. You earn for sharing your posts or someone else's you think needs notice and for commenting on the posts using PYPT as part of the comments.

You can learn more at https://ramblingradio.tokenbb.io/

@shadowspub
The current Rambling Radio Schedule can be found here
It's All About Community!

Thank you naltedtirt! You've just received an upvote of 21% by thejollyroger!

Do you reload all your old rounds or buy new?

I use to love going shooting at a range. I was pretty good but not skeet shooting. Hated that.

This was a very interesting post!! Thanks for the great read!

Those are used for different kinds of bullets😆

I just buy new ones, I have never gotten into reloading. Thanks Snook for reading it!!

If it did shoot, rechargeable would be the best kind to use, it could be used over and over and would have more power than the other brands.

Nice! Many stackers are into guns, as I am too. Here is my collection:
https://goldvoice.club/steem/@silversaver888/my-guns-cast-silver-hand-pours

Thank you, I will take a look

This was a really Great post and much interesting information that was new to me 😉 I don’t know a whole lot about Guns and caliber, but I find it fascinating and I love how they are shaped differently and ofcourse... Not gonna lie... The shiny ones makes my heart jump a little more 😂😂 Hahahaha
The 2ARs looks awsome and you should have saved them 😜 lol
Thank you for making this post and Thinking of me 😘 now I feel The tingling feeling of shooting something 😂😂 Hahahaha
Much love 🤗💖🌹

If you are tingling.....my work is done for the day!

Hope you have a great, fantastic day!!

I WISH I WON THAT SILVER BULLET FROM MONSTER RAFFLE 4

Would have been a cool one. Maybe I should pour some silver bullets.

Yeahhhhh they would be fun!!!! You need them for your werewolf posts hehehe

I need an actual werewolf as well to practice on.

I know a few

put me in contact with a couple. When they are in human form is best so we can work out the details rationally.

Hehehhehee rationally...yes.. would be best to have rational discussions with humans as opposed to irrational with werewolves lolololol

Our comments make me laugh!!!!

Hunting for Werewolves? BMG round in Silver,10 oz by NWT Mint

Modelled after the 50 cal as used by a Barrett sniper rifle.

Now that is a shiny post for our fab sara !!! and it have some serious bang for your buck; juust as she dose :D

The battery would be pretty dangerous fired from a slingshot. ;^) (I'll add it to my zombie apocalypse list.)

I knew none of this so thanks for the info and for filling my daily need for shiny things that do damage. (Now I have a handy little reference list.)

The battery would be devastating.