The History of Bangladesh 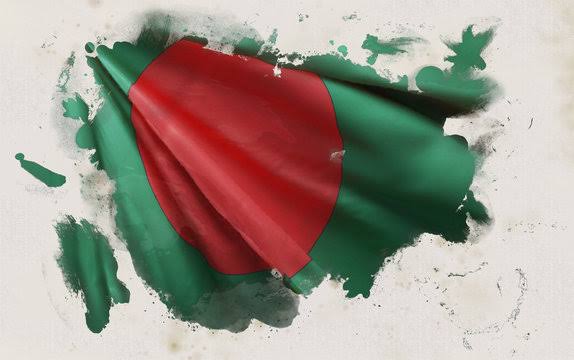 How are you all? Hope fine. Today I'm going to post something different. I think you already un understand by see my profile picture. 16 December is here. A great day for Bangladeshi people. 16 December is our Victory day. So today I decided to write about Bangladesh'a History. So let's start.

In In 1947 44 lion BenBengali peole of East gal became part of of the kingdom oakistan. The government of Pakistastan was ruling thestern part of Pakistan. The National Education Conference in KarKarachi said that they want to use y Urdu as the state language and in schools and media.ia. The people of west couldn't agree with this. So they decided to prot on the eastern side.

In In Dhaka the students made a rally lead by Abuasiasim. Theeting decided to make Bengali an official language of Pakistan and a mediumium language in t Bengal. 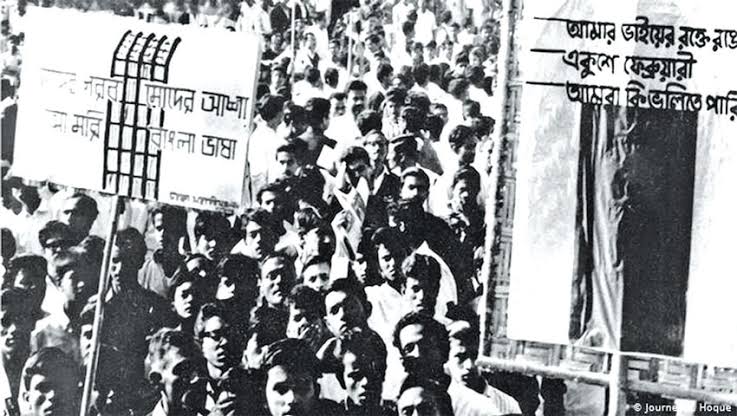 <
the Paki Public Service Commission removed Bengali from the list of approved subjects ats and also they removedgali from currency notes and stamps.

Pakistannion Education Minister Fazlur Rahman made exteade his mind to u the only state language of Pakistof Pakistan. The Bengaliere outrere angry and sectrge number of ents gathered on the campus of Dhaka College and Dhaka University on 6 December 1948 to demand that Bengali bBengali to be office an official language. nguage. Because of this ths organized processions and rallies in Dhaka.

Protest pProtest was going on 21st 1952 in Dhaka. As ka. In 1952 most ofthe cit Pakistan were Bengalis, whoalis who were abo the total population. On 21 February thatary 1952 Bendents becamnts raised their voice agagovernment in protest of the declaration of Urdu as the only national language. 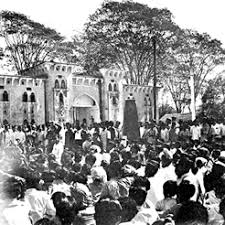 They started gathering at the Dhaka University premises at 9 am in violation of Stion of section 144. The uni vice-y's vice chancellher officials were present on camt on campus guard by armed p---

At ---
At 1111.15 am the stuered at the university gate and tried to break the barrier. A grour. Most of the stutowards Dhaka Medical College and the rest marched on the campus surrounded by police. The vice chancellor ordered police to stop firing and foing and asked to the stueave the area.

Police arrested some students for violating Solating section 1the students were leaving. Uponng. When he news of the arrest, e arrest the stuked the East Bengal Constituent Assembly and demanded to present their proposal there. Police opened fire as a ire because of tried to enter the building, building and killingtudents, students includiRafiq, Barkat, Jabbar and Shafiur.

The news of tgs spread throughout the city. Shothe city, shops, ofic transport were closed and the strike began. 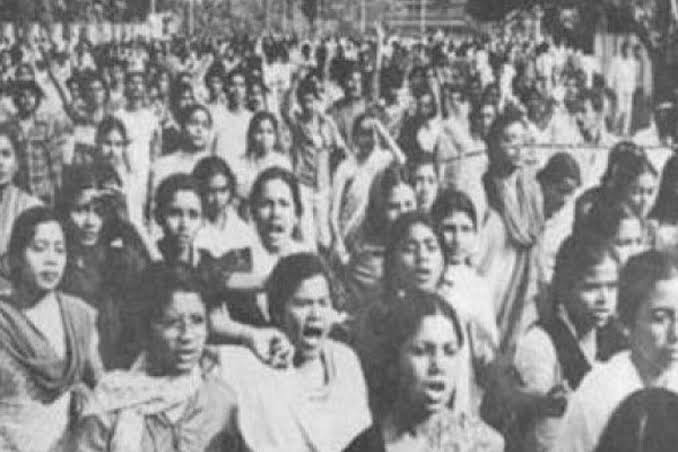 In the 1970 gIn 1970 thewon 16 of the 189 seats in East Pakistan in the National Assembly and Awami League leader Bangabandhu Sheikh Mujibur Rahman emerged as man was selected aesthe only repthe people of the East Pakistan. He becaf the majority party in the National Assembly of Pakistan. But Pakistan's military and civilian leadership conspired against the handover of power to the majority Awami League and its leader Sheikh Mujib. Sheikh Mujib's historic speech on March 7, 1971, made his attitude to the Pakistani military junta clear. 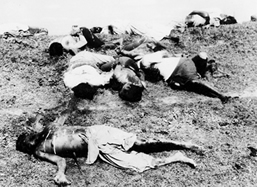 Then the non-cooperation movement started. Talks between Sheikh Mujib and Yahya Khan have already started to resolve the issue. Negotiations failed and at midnight on March 25, 1971, Pakistani troops started massacrstarted killing Bengali soldiers of the Pakistan Army and the Bengali members of the paramilitary forces immediately expressed solidarity with the people's liberation movement.

At midnight on 25 March, the Pakistan Army was ordered to launch an operation against the Bengalis. According to the plan called 'Operation Search Light', two headquarters were set up. The first headquarters was formed under the supervision of Major General Rao Farman Ali. Here Brigadier Arbab of the 57th Brigade was given charge of operations only in and around Dhaka city and Major General Khadim Raja was given charge of operations in the rest of the province. Lieutenant General Tikka Khan is in overall charge of the operation.

Studentst political activists formed resistance outside the cantonment. Roadblocks were set up in various parts of the city to prevent Pakistani troops from conducting operations. On the night of March 25, Pakistani troops took to the streets of Dhaka in wireless jeeps and trucks. 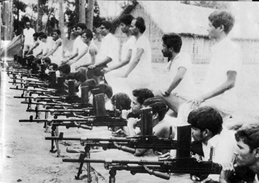 Their first armored fleet left the Dhaka Cantonment and faced a barricade in the Farmgate area within a kilometer. Giant tree trunks were strewn across the road. Useless old cars and immovable steam rollers are also used in barricades. Hundreds of people chanted 'Joy Bangla' for about 15 minutes. However, the army's bullets quickly silenced them, and the army began to spread throughout the city, massacring them.

Pakistani soldiers kill anyone they see on the sidewalks, threatening to destroy everything in front of them. Without any discrimination, the people of the city and all the public and private houses were destroyed and the tanks of the soldiers roamed around. Many residential areas were destroyed by artillery and gunfire, and houses were set on fire. The soldiers entered the residential halls of Dhaka University and brutally killed many students. They also killed some teachers of Dhaka University that night. They attacked Hindu-inhabited areas of old Dhaka, killing countless people, burning and looting houses, and raping women.

These attacks on unarmed people and indiscriminate genocide campaigns are covered in the world's media. On the night of March 25, Pakistani soldiers arrested Bangabandhu Sheikh Mujibur Rahman.

With the declaration of independence of Bangladesh on 26 March 1971, spontaneous coups for independence took place in all parts of the country. People of all classes irrespective of government officials-employees, political activists, students, workers, peasants, professionals took part in this coup. The resistance built by the Pak army to deal with the attack and genocide was short-lived at an early stage. The enemy troops were many in number and they were armed with many weapons, so the freedom fighters crossed the border to India for safe haven. Soon the isolated freedom fighters in different parts of the country were brought under a single command. 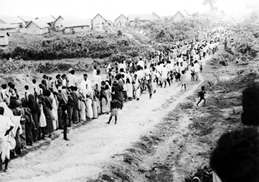 On 10 April Bangabandhu Sheikh Mujibur Rahman was made the President, Syed Nazrul Islam was made the Vice President and Tajuddin Ahmed was made the Prime Minister. The next day, Tajuddin Ahmed announced the names of three more regional captains. Captain Nawazish became the captain of Rangpur region, Major Nazmul Haque of Dinajpur-Rajshahi-Pabna region and Major MA Jalil of Barisal-Patuakhali region. Each region is identified as a sector. At a conference of sector commanders held from 10 to 16 July, the whole of Bangladesh was divided into eleven sectors and various sub-sectors to facilitate operations.

Mukti Bahini training in handling weapons on 26 March, the Prime Minister of India, Indira Gandhi, expressed her government's full support for the liberation struggle of the Bengalis. 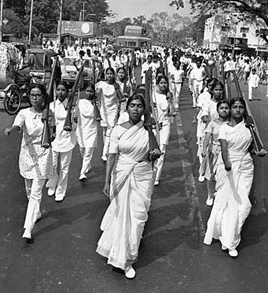 The governments of West Bengal, Bihar, Assam, Meghalaya and Tripura set up refugee camps along the border. Freedom fighters were immediately selected from these camps. With an unquenchable desire to liberate Bangladesh from the clutches of Pakistani troops, students, peasants, workers and political activists joined the Liberation Army and received training in war tactics, weapons and explosives. At the end of the training they are engaged in fighting against the enemy in different sectors. The headquarters of the Bangladesh Army was established at 6 Theater Road, Kolkata. The headquarters started functioning from 12 April. Lieutenant Colonel MA Robb and Group Captain AK Khandaker were appointed Chief of Staff and Deputy Chief of Staff respectively.

In the war against the Pakistani army, besides the Mukti Bahini, many more forces were organized inside Bangladesh. Among these forces are Quader Bahini of Tangail, Latif Mirza Bahini of Sirajganj, Akbar Hossain Bahini of Jhenaidah, Hemayet Bahini of Faridpur, Quddus Mollah Bahini and Gafur Bahini of Barisal and Afsar Bahini and Aftab Bahini of Mymensingh. All these forces were organized locally and engaged in several battles against the occupying forces in their own strength. Proletarian Party leader Siraj Sikder organized his forces in Barisal. Another force, the Mujib Bahini, was formed with the active cooperation of Major General Oban, a guerrilla warfare expert in the Indian Army. Members of the Mujib Bahini were trained in Dehradun. Chhatra League leaders Sheikh Fazlul Haque Moni, Tofail Ahmed, Abdur Razzak and Sirajul Alam Khan were the organizers of this force. 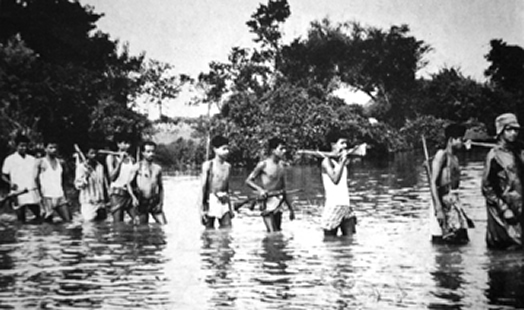 The first brigade of regular forces, known as the Z Force, was formed in July. The brigade was named after the English initials 'Z' in the name of Major Ziaur Rahman, the commander of the brigade. The brigade consists of 1st, 3rd and 8th East Bengal Regiments. The second regular brigade, known as the S Force, was formed in October with soldiers from the 2nd and 11th East Bengal Regiments. Safiullah was the commander of this brigade. Under the captaincy of Khaled Musharraf, 'K Force' was formed with the members of 4th, 9th and 10th East Bengal.

The Bangladesh Air Force was formed on 26 September in Dimapur, Nagaland. It was organized by Air Commodore AK Khandaker. The Bangladesh Air Force started its journey with Squadron Leader Sultan Mahmud, Flight Lieutenant Badrul Alam, Captain Khaleq, Sattar, Shahabuddin, Mukit, Akram, Sharfuddin and 7 Airmen. They consisted of only a handful of Dakota, Otter type aircraft and elevated helicopters. Similarly, the Bangladesh Navy is made up of naval personnel who have left the Pakistan Navy. The first navy 'Bangabandhu Navy' was inaugurated on 9 November 1971.

It included only 6 small boats. The Bangladesh Armed Forces was well organized with regular brigades, sector troops and guerrilla forces, Bangladesh Air Force and Bangladesh Navy. The Mukti Bahini initially fought successfully against the enemy in many defensive battles. But in a short time they have to make a temporary retreat. The Mukti Bahini, however, later reorganized and went to war with better weapons after April-May 1971.

Advancing guerrilla freedom fighters. During the war of liberation of Bangladesh, at the international level, the United States and the People's Republic of China gave strategic support to Pakistan by referring to this war as an internal matter of Pakistan. On the other hand, the common people of India, the Soviet Union and their allies, and the people of Japan and many countries in the West sided with Bangladesh. 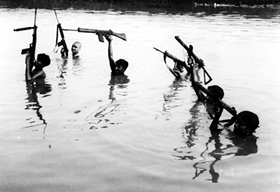 On 9 August 1971, the Government of India signed an alliance agreement with the Soviet Union to gain strategic advantage against the Sino-US-Pakistan axis. The signing of this agreement added a new dimension to the war of independence of Bangladesh.

Meanwhile, at the headquarters of the Mukti Bahini, the strategy of fighting against the Pakistani soldiers was thoroughly analyzed. Thinking that the conventional tactics would not be conducive to defeating the Pakistani troops, the decision was taken to launch an all-out guerrilla war across the country. At the same time, the sector commanders were instructed to recruit freedom fighters from within the country and recruit them as guerrilla fighters with necessary training.

In November 1971, a joint command of the Mukti Bahini and the Indian forces was formed. Lieutenant General Jagjit Singh Aurora, Commander of the Indian Army's Eastern Command, was appointed Chief of the Joint Forces. However, after the bombardment of Amritsar, Srinagar and Kashmir Valley by the Pakistan Air Force on the evening of 3 December, the joint command of the Liberation Army and the Indian Army took an effective role. That's when the Indian armed forces were instructed to retaliate against the Pakistani army. The Mukti Bahini and the Indian Army gradually advanced inside Bangladesh. As a result, defeat and surrender of Pakistani troops became inevitable. A ceasefire was proposed in the UN Security Council on the eve of Bangladesh's complete liberation from the enemy. This effort was thwarted by the Soviet Union's veto. 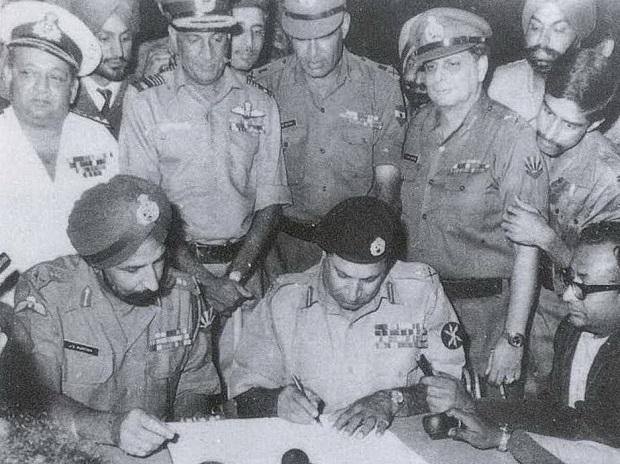