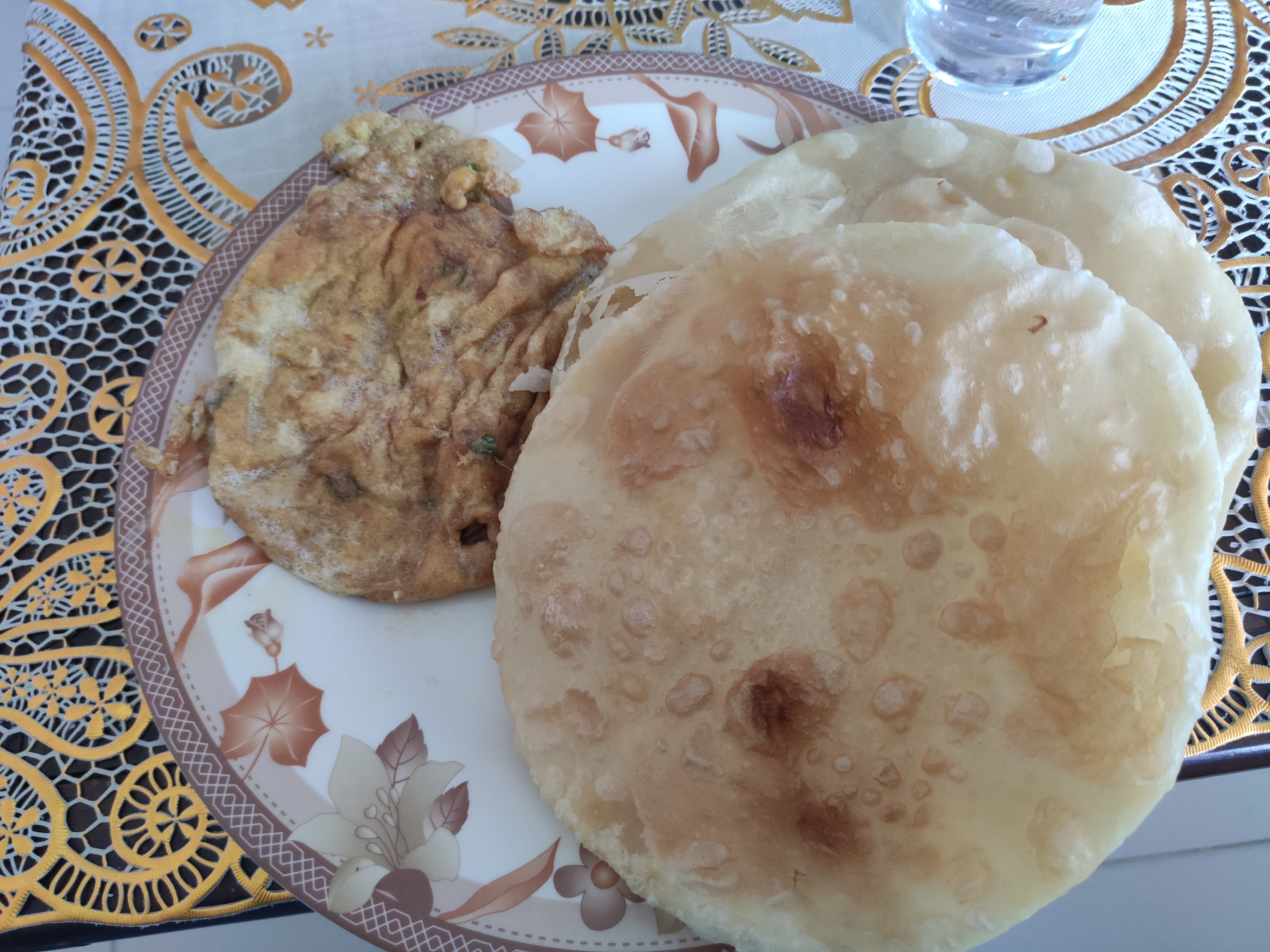 A Day in Toufiq's House

Today I woke up. It was very cold. I hold my phone. I pressed power button. I saw the time on phone. It was 10:30 am. I got down from from bed. @toufiq777 was still sleeping. Today I woke up a bit late because yesterday night I had done a lot of work. I made a curation report and posted it through the community id. It was first time for me that's why it needed more time.

I sat on the sofa. I unplugged the charger and took my phone. After few minutes later aunty gave me breakfast.

Photo Description: I was having my breakfast. Aunty made porota and fried egg for breakfast. It was very delicious.

I finished my breakfast. Then I washed my hands. Then I sat on sofa and started using steemit. I was commenting some posts on steemit. @toufiq777 came for few minutes later. We talked with each other. Then I told him that I will leave. I said bye to Aunty. @toufiq came with me because he had some work.

We were walking. We were going to railgate for autorickshaw.

Photo Description: Finally we reached there. At that time I took this photo.

Photo Description: It was my time for leaving. @toufiq777 said bye to me. At that time I took this photo.

Photo Description: I was going to Bus Terminal. At that time I took this photo.

I finally reached bus station. I was searching for my bus but I couldn't find. So I asked someone. He told that the bus left. So I had to wait for another bus.

Photo Description: Finally the bus came. I sat on the bus and took this photo.

The bus left Sayedpur in time. I sat beside window. I was taking window views. It was very beautiful. After half an hour later I reached.

I came back to home. I went to bathroom. I took a bath. It was very cold. I went to rooftop for drying my towel. I was taking sunbathe. It was feeling nice. Then I came back. I came to my room. I was listening songs in my computer. My mother called for lunch. I went for my lunch.

I had my lunch. Then I went to kitch for washing my plate. After that I came to my room. I thought of playing video games. So I sat on my computer. I played a computer game. It was Horizon Zero Down. The graphics looks awesome. I had fun playing that game. I passed a good time.

Photo Description:We won the toss and elected to bat first. @saany was batting at that time and @boss was in opposite.

We did some great runs. Thats why we won that match. But after that we lost last match. We enjoyed the matches.
It was getting dark so I headed back home.

I came home. I went to washroom for freshen up. Then I came to my room. My mom gave me some snacks to eat. I had those snacks. After that I took some rest. After an hour later I went out for playing badminton.

Photo Description: childrens were playing. I was sitting on a chair. At that time I took this photo.

After their playing we started playing. I played some matches. Then I came back home.

Brother posted a lot of nice.

It was my time for leaving. @toufiq777 said bye to me. At that time I took this photo.

The pictures of the two of you have been very beautiful.
The bus is very clean.

It’s my pleasure brother. Keep me in your prayers ☺️

A very productive day! You did a lot of stuffs in one day.

Are the buses still keeping one seat empty and taking double fair?

No. All same as before.