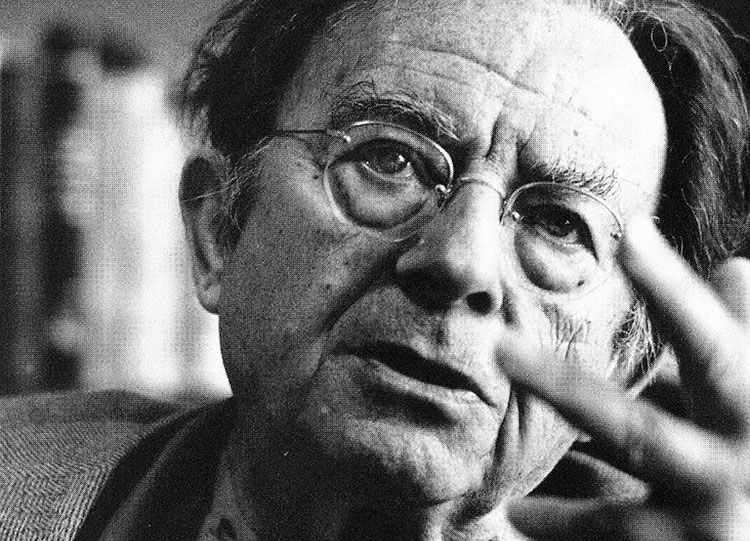 This phrase by Erich Fromm is deeply philosophical, moreover, something modern that points to the future. I'll try to make a subjective evaluation of this manifest.

Education in itself does not "Makes Machines", it is the man who does it. Education is a methodical, academic, professional process, provider of knowledge. Capable of generating science and implanting the "Idea" in the mind of a man. Powerful tool that can change reality and the order of things.

But based on this metaphor! and the objective of education being to train human beings and provide them with tools to fend for themselves, thus, the brilliant phrase takes on broad meaning.

The man snatches the circumstances in favor of his advancement and evolution. The creation of AI, initially, aims to help the worker in their work functions and thus maximize production. Later, noticing the endless applications of AI in everyday life; "Machine learning" and "Deep learning" are applied in practically everything.

The development of technologies has generated radical changes that impact the way of life and way of thinking of man. Sometimes the modality of Videoconferences, distance learning methods, even audio-books, have replaced in a certain way the traditional education method; which is carried out in person and under the tutoring of individuals, with proven, demonstrable academic training and attached to the institution.

Continuous learning and the acquisition of knowledge disproportionately leads to the transformation of the need to acquire knowledge. The “Millennial” generation, understood as millennial, the stage from the last five years of the 90's to the current year. This generation has been formed in the era of maximum technological advance.

In this way, for reasons associated with collective behavior, then the expression would gain a bit of force:

Sophisticated equipment, as well as data handling, is embedded in the brain in a similar way to loading software into a computerized system. I say it, as an allegory!; because high resolution audiovisual media, interaction with touch screens or motion sensors, 3d and 4d technology, the creation of avatars, holograms, the use of AI, among others, make the learning experience, something full.

Methods that transcend the previously proposed model, based on printed books, academic dialogue, written tests. The use of physical support material; such as pictures, labels, spoken expositions, group dynamics, direct human contact, they also represent other training techniques that many of us exclusively instruct ourselves with.

All this change gives way to the digital age and the management of virtual data, which have their equivalence in terms of programmatic content, but given the amount of technology involved in the teaching-learning process, I would not doubt that the association of man with the machine, is something intrinsically linked, as expressed in the famous phrase of Erich Fromm.

This is my participation in the challenge: Project Hope competition #2 for all content creators. I call on all Steemit.com users to join the initiative. Thanks to @josevas217 for the cordial invitation.

One of the things Mr. "Erich Fromm" has is his taste for Marxist ideas, which confuses words like education with educational systems and production with lack of freedom. From my point of view only a solid education gives freedom to the human being and the systems these people create make the processes of production more efficient. But his words are anchored in a past reality very different from this present one.

OK! you have a fairly broad knowledge. From the beginning I noticed the structure of Fromm's sentence, it was quite complex and well structured. Hence its deep meaning that derives multiple interpretations.

My knowledge about Mr. "Fromm" is limited, but my knowledge of maxiist ideas is broad because I live in a country where those ideas cause a lot of pain.

Ok I understand. It's nice to meet you. I like to invest in philosophy and idealism. In fact I try to establish my own criteria, forming little by little through study and the exchange of information. Today I research ancient philosophers, specifically Platon, Socrates, Aristotle, and Pythagoras. It amazes me how his theories and precepts have had a positive impact on humanity, ingraining themselves in culture and society, even to this day. That I do consider something truly influential, worthy of understanding.

Thank you for your comment, I value your opinion.

Good point @trabajosdelsiglo
Mr. Erich From is from another age, certainly, and part of his thoughts are a reflection of it, and of his philosophical tendency.

I believe that it is a serious mistake to confuse, or better said to mix the political demagogy that prevails in some governments, with the ideas of Erich Fromm, if in fact he studied in depth the theories of Marx, that in the light of the humanity still maintain acceptance by their socioeconomic approaches, Fromm and their positions of dialectical humanism that in a masterly way he could develop from his formation as psychoanalyst, are elements to take into account in present context nothing encouraging for the healthy coexistence of the humanity. In particular, Fromm's ideas represent our connection of biophilic character, therefore, his approaches partly tried to move away the humanity of his unconscious and predatory actions.

Educations is key to acquire some certain knowledge that without education, it will not have been possible

Hello @nachomolina
Interesting proposal. Certainly, it is a pretty deep phrase that Mr. Fromm left us.
The possibilities of learning, as you mentioned, from the digital has increased in recent decades, and in my opinion, this year has been exponential contact of all the world's student population to the digital, let's see how all this ends, and how it affects the social and the ability of human beings to express themselves and communicate personally.
Because I have been able to see that many adolescents who are very good at communicating online have very limited abilities to socialize, it is not a constant, but I believe that it could be.
Thank you very much for your participation in the contest.

Greetings, @josevas217! it is true that during the quarantine period the use of new technologies has had a great impact on the educational system. Furthermore, it should be noted that parents or the family in general have also had to perform tutoring functions and be directly involved in the teaching-learning process. In fact, some children have shown tangible signs of progress in their learning process and child stress generated by certain general conditions or deficiencies that schools currently present, at least in our country, has decreased.

I see that you have expressed something very important that reflects the possible ideal balance point in this line of thought based on the original phrase of the contest, the cvale is the association between man and "the machine", only then would it be a perfect pair, considering that there are roles, capacities and abilities that by their nature cannot be supplanted by one or the other.

It is right! Education is the main area where Technology applies. Since technology and the machine are simply an accumulation of knowledge generated by man and materialized in a tangible way. The depth of that phrase from Fromm allows it to develop different concepts that may involve. Human sentiment, incorporation into industry, political interests, over-exploitation of labor, among others. Thanks for commenting, @tocho2
Bye.

Hello @nachomolina great contribution that you do not make about the contest sponsored from @project.hope. I have reviewed several of the published materials and I am surprised by the varied approach we have given to this sentence by Erich Fromm. No doubt they are different perspectives loaded with a lot of reality and coincidence with the sentence. Greetings and thanks for your contribution.

Hello, you are absolutely right. The phrase allows various approaches to the reality of "education". I think there are still many contributions that technology can give to science. In this quarantine it was shown that the field of education today is closely linked to the advances of information technology and the digital age. @madridbg Thank you for your kind comment