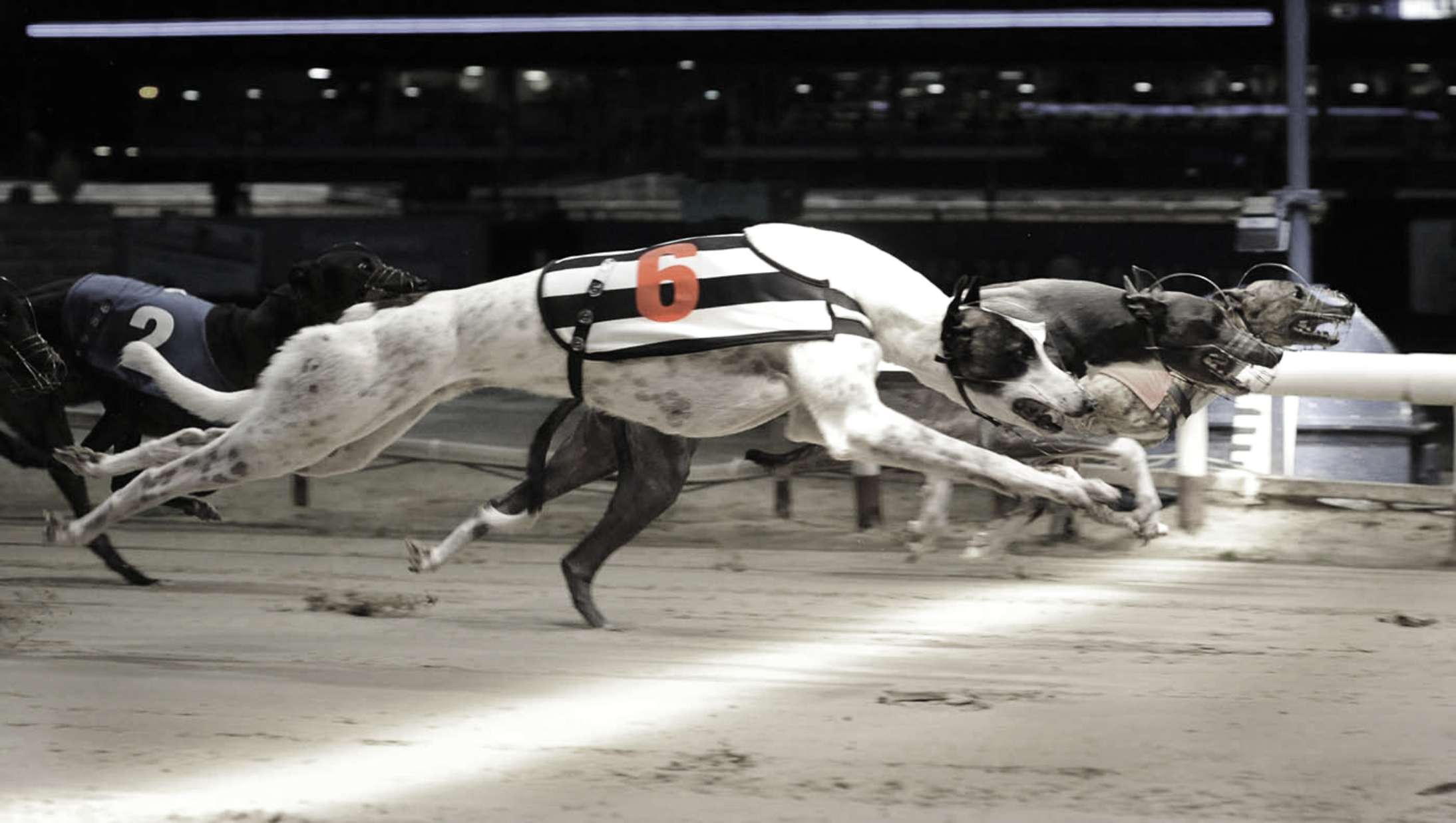 Call of my mind charged with dual memory. Remembrance in the past with the tilde n ° 6 that I must deal with. Uncomfortable moment of choppy time and its flashback that seeks me, finds me, warns me of the alter ego whisper. Reminder that my own hand moved by dark desire, sees everything, knows everything, can change everything...

I witnessed a greyhound race in the facilities of a dog track. Sitting on the first-class dais. The blue, semi-padded seats, located in the central lobby with the option of free drinks and direct access to the bets. I remember the unbridled herd of dogs running behind the lure, at the right moment, when the driver played the famous phrase: "Here comes the hare".

I had brought enough money to bet, in addition to that, thanks to the remittance obtained by hitting "winner" from malanga n ° 6, one of the favorite dogs, I was a rich man at that time. Scarce, tiny moment, fleeting, like the duration of a penny in the mouth of the slot machine.

In my opinion, ludomania is a passive psychological state that can nest in someone's mind, without causing any discomfort, to such an extent that it goes unnoticed. Accustomed to gambling, many summarize the streak of luck simply, as a transitory effect that sometimes gets on their side. Others not so much, the spell can leave them, without warning, trying to lose everything. Based on this !, I think that in general, we do not know the dimension of the player that we keep inside; what he is capable of, how far his eagerness to get the filthy money can go. That inveterate gambler who lacks scruples, can end his salary in a single bet, even leave a joint checking account for family use without liquidity, bet his wife's car or the apartment. Being gambling, one of the most common outbursts that are usually seen in a casino room.

Card gamblers, skilled fakers, masters of the trap. Legal talkers who like clowns mingle in the crowd, haunt the tumults in the rooms, trying to find the victim of their new hoax. It makes me believe !, blindly, that once, when the world of gambling catches a man between envite and chance, he changes, he is transformed forever, being able to let out his most vague and bizarre character. His perversion on easy money, which dominates him and turns him into a vehement threat to whoever crosses his path...

All the money obtained in the canteen of a renowned bar or gambling site has a common denominator for a gambler; the fact of ending up drunk, dragged like "dionysus"_ in a broken glass attached to the uncorked barrel, even after the day was over. Oak barrel, refilled with liquor with the sinfin dispenser placed with propitious by the administration of the games room. Which has as its final mission, after giving the client some ecstasy, a feeling of power, reins of pleasure and profit. Proceed to secretly "assault" him at the doors of his locker in the last play that he may make..._

The little man approached me, so small, like a bastard mistletoe. I admit, he was well dressed for the occasion, in an olive green linen suit and polished shoes with a fashionable complexion. That intrepid attitude developed by professional bettors with fine aim for the plays. He walked among the armchairs, with a brand new smile, perfect, irresistible, a brilliant smile, impeccable and at the same time full of a certain boast. It was placed in the front seats, then in the center and the corners, as if trying to make an optical approach on the specimens, like someone who has enough cunning to detect, by eye, which will be the next winning animal. I was watching my gazette! Trying to see the favorites. In my little experience, guided by the age and weight of the can, I made notes with a pen on the back page to try to put together my next move. The little man from the previous scene sat next to me; He placed two drinks on the lectern, noting that one was for me. At the same time, he saw the time on his wristwatch and rubbed his hands against each other, his eyes fixed on the track of the dog track.

Nice to meet you, dear gentleman, it is my honor to serve you.
The pleasure is mine, I replied. thanks for the detail.
Do you want to hit the next race?
That's what I'm trying to do, I told him.
_ Well, please bet on can number six, to winner...
_ ...

That man shook my hand again, smiled again with total joy and complete resolution, like someone who closes a business, like someone who has just invested in a new company. He continued his walk around the grandstand, wearing his suit, his rolex and making sightings of the runway.

Detailing that subject well, the dwarfed man, out of nowhere. I could see that it denoted security and at the same time, mischief. His approach to me, deep down, did not seem fortuitous. Rather, I deduced that it revealed to me some systematic, hidden or mysterious data, of those that move in the casinos behind the scenes... If not, what other reason can the can number six have? Why the data ? Why did he choose me precisely? What other end! There would be behind that quality of behavior that generated in me, influence. That pilla unchained and mischievous complicity that caused me delight... I saw him stand on the corner stand, sipping his glass with drink, he looked at the time again on his watch, then he looked at me, as if to imply that he would not stop pass the moment. Finally, he set his sights on the box for can number six, just a few minutes from the bell.

I, the inexperienced gambler!, I continued as if nothing, looking for a brief moment at my gazette and thinking naively what my best option might be. However, a tiny passion about the game, a tickle, unknown until now, arose in me out of nowhere at that moment...

I ran to the pay booth where the crowds were total, people killing themselves to get their ticket. In desperation they passed the gazettes, the money, the information shouted and reluctantly, sign language and snatches, pushes, blows... cunning passes of wads of green money, going back and forth over the heads, score sheets, numerical codes that flew everywhere making me lose my patience and obsessing, more and more, the pathological gambler. Who now was willing not to die trying to get a place and get his bet... I had to jump from one box office to the other, drag myself across the floor between stomping and spitting, fighting for a turn in command between the many failed attempts, junk, laundry, perched, which I had to endure. I was willing to do anything to win my bet before the round closed. There was a subject located in front of me who was blocking the way, with all intention, using his very broad back, his height and weight, preventing even letting me see the locker fence. That man developed in my mind, already battered enough, a certain attack of claustrophobic anger in the infinite moment when I asked him at the top of his lungs to please give me permission, give me just a small space or place where I could connect with him. bookmaker and pay my number. I remember, my dark frenzy was such, my supervening perversity, forced me to go over him, to climb on his back as if it were a cliff. I stuck the pen in his shoulder blade, resting his shoe on the spike, then I stood on the roof of the payment booth, where I visually coincided with the regent, who, noticing my sick act of such magnitude and despair, my vicious eyes that caused fear, denoting hatred, promiscuity and unbridled insanity, he extended his hand to receive my money and process my bet.

I bet in the last second, all my money to winner. And finally I ended up in the front row of the track with my bet ticket for can number six. Enjoying my drink, sitting in the blue armchair, in the company of the little bastard mistletoe man who had made me discover my uncontrolled passion for the game, which I did not know, and had guided me to malanga n ° 6, the winning dog...