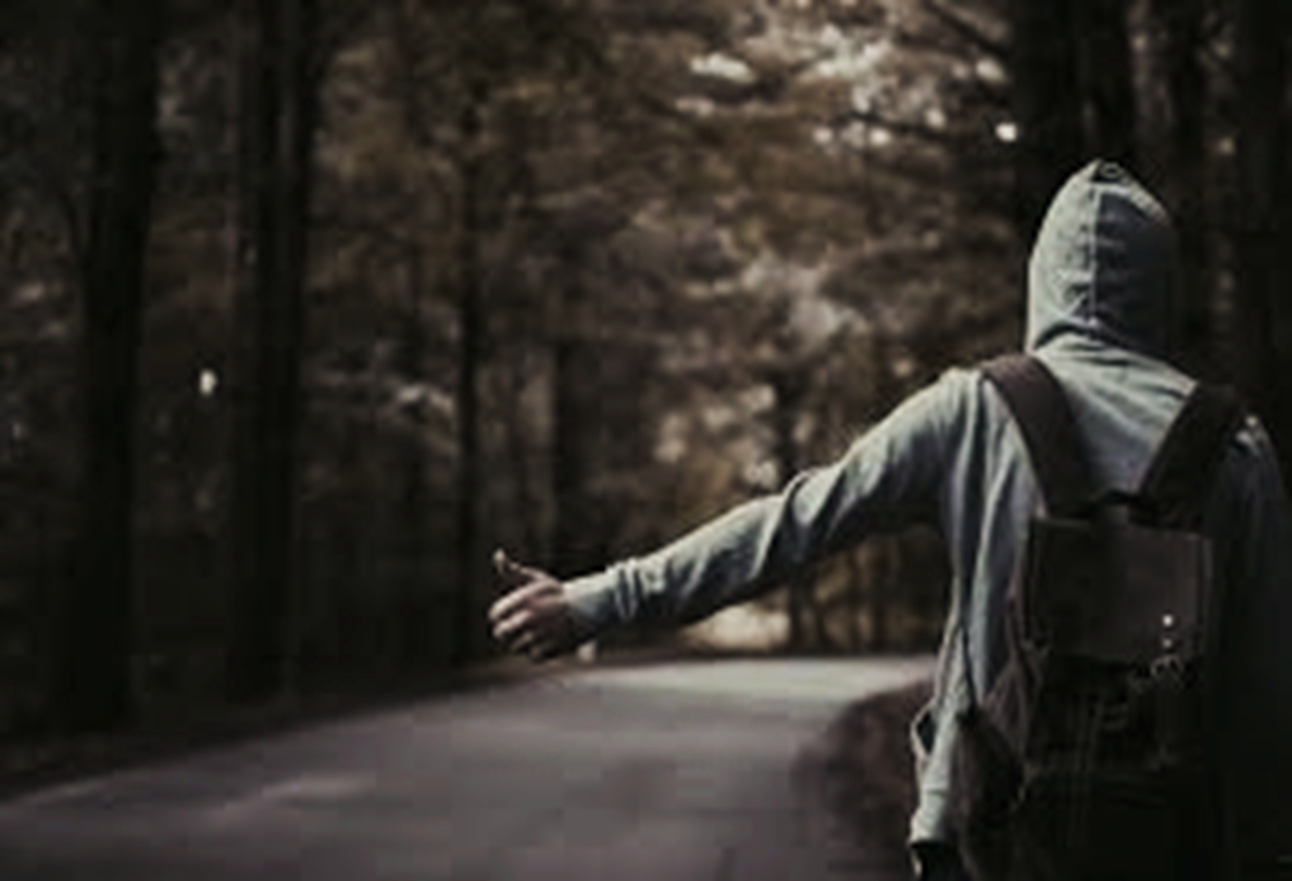 He had traveled 52.6 km of the trunk, in a south-west direction, hitchhiking some pious driver who deigned to stop. That was the beginning of my story on that interstate highway which I had to travel most of the way, on foot, since most of the _rides_ were short, hardly, until the outskirts of the small agricultural town, where at that time I lived. It is really uncomfortable to walk in the sun while wearing a graduation suit, a dotted tie and patent leather shoes, because it was the only formal attire available to me at the time when, just a few days later, I had just obtained my title of engineer. In the middle of the morning, I was riding in a vegetable truck, sitting on a wooden box, which was the only decent lectern in the back where they made a stand for me. I was entertained by listening to the public workers speak, who, holding one hand to the restraining ropes, carried half of the body out of the van. Accustomed to their routine, they didn't care how they dress, they didn't care in the least about their appearance. They tied their pants at the waist with a tow rope as a belt, they wore plastic worker boots and old patterned T-shirts. However, this is how they were happy, this is how those men from the fields made a decent living and joined the workforce, distributing the product of their harvest all along the way.

> For a moment, I put myself in their place, I saw them so carefree, with time in their favor, I concluded that they were lucky to have a placid and calm way of life.

At last, in the distance, no less than two kilometers away, I managed to make out the buildings, the towers, the smoke and the pollution of the great city. That was my destiny, since I had been summoned to a job interview in the "Blue circle", a renowned contractor dedicated to the production of concrete miscellaneous such as: Concrete, pre-mixed, mortars, pre-fabricated elements, masonry, test tubes cylindrical, etc. He had heard it said that half the city was built by this fantastic company, whose fame was attributed to its ability to mass produce colossal quantities of concrete mix, enough to meet the demand for all the state's works.

_The owner, a wealthy businessman who moved among the strata of high society, characterized by hiring the minimum human resource possible. He trusted his fortune, nothing collapsed or compared him, since his continuous production equipment was of the most advanced technology, they were in charge of maintaining the boom and did the work of a hundred men in one task. As a speculation, I heard that the blue circle was an esoteric emblem created by it, which, in its simplicity, hid a reason for being, a hypnotic character that attributed power and fame to it. However, he, for his part, was not that enigmatic, he only maintained an airtight attitude, exhaustively selecting his staff, without paying attention to comments._

Suddenly the vegetable truck stopped, I supposed to leave some cargo. It was a crossroads with sales shelves and refrigerators, I could see that they had a diversity of items, among them: Vegetables, dried meat, fish, some accessories for cars, such as; steering wheel trimmings, flavorings, etc. All in the open air, they were improvised tarantines where truckers stopped to quench their thirst or to leave products. I continued sitting in the van, as if nothing was happening, until one of the traveling companions, a worker, who took the packages, by _two_, he mounted them on his shoulder as if they were goose feathers, he told me:

> _ This is where we come friend! You better start walking or maybe you want to work with us?

After giving me a friendly smile, he continued with the download.

I don't know why what the worker had just said seemed suggestive to me, it was like a hint, no one knew better than they the reality of the thriving area where I was going. When we talked during the road trip, they mentioned how difficult it is to get an opportunity in the city, they also alluded to the fact that many returned empty-handed and then, unsuccessful in their attempt, stopped at the cruise ship to tell their ruinous story. I saw the kilometer-long highway covered by evaporation, the mirages with a watery aspect on the surface were lost from my sight, gusts of heat of no less than 36 °C dimmed my sight just trying to look. Heavy and extra-heavy trucks marked their tires on the asphalt, the smell of melting rubber, overheated brake pads and diesel fuel abounded. I looked at the workers for the last time and said goodbye:

> _ Until next time guys! Thanks for everything, for now I must continue, I will get to the _blue circle_...

I did not pay too much attention to their answer! After all, I was in a hurry with a long way to go, in addition, they said they had not heard me well and did not have time to repeat the snapshot. I raised my hand with the "V" over my shoulder as I turned my back to them. I followed the arrow of the traffic signal, trying to assume a sober and optimistic thought. Now I had to worry about the remaining journey, I thought that getting another ride would be good for me, but for now, I walked accordingly trying not to ruin my suit. The first hundred or two hundred meters, counted from the cruise, were of absolute normality and calm, to have an idea of ​​the distance that I traveled and get approximate accounts of how much I would still have to travel, I amused myself counting the _measure_ with closed steps or guided by demarcation lines. Not so, the subsequent section, in which everything changed drastically and suspiciously.

The wind began to blow horizontally, kicking up the dust from the road and creating small eddies, dense air in a hot mass that began to disperse particles everywhere, forcing me to cover my face. That suffocating smell began from the distance, the smell of damp earth, of tree bark, which shortened my breath and in turn betrayed the proximity of rains.

In a way my trip, despite being improvised, having to hitchhike, transfer and also travel in the back of a truck loaded with vegetables, this one, had not been bad at all. In fact, at first it seemed very constructive to have mingled with that group of honorable workers and exchanged. He still remembered the words of the workers and their advice. For me, that stop at the crossroads was transformed as a kind of signal, which left me learning and also a warning, undoubtedly, in the depths of me, it seemed to me that it marked a before and after...

It was like this, the sky covered by a great bluish, grayish cloud, like a tapestry that covered the sky, a dark hue that only had a name, a reason for being... Water! It made its first clear, blinding electric shock, which I saw it fall on the city center, as they say, in the dissonant, mad and superstitious language; It was like the arrival of the devil on earth. Then another and another discharge, with ramifications, tangles of lightning that allowed their voltage, their fury to be interpreted.

And the bizarre sound of thunder digging into the depths of the earth, ending the intrigue of the environment and shaking everything under my feet, until causing me absolute petrification, until completely clouding my destiny with a gray curtain that completely made the distant image of the city, letting me see only its reflection, on the back of my closed eyelids, a blue circle...

_Bowls of rain, unchained alluvium falling on my humanity. The wheels of the trucks whistled like rough trumpets coming from beyond, the machines seemed not to touch the pavement, monstrous, they cut the water before touching it, I would say that rather, they plowed between them as in an ocean and their wave caught me in the centrifugal, it magnetized me, it pulled me towards the center of the road like someone pulling a cord. In just minutes minutes I was already scrapped, on a slippery plane with _longwide_ trucks that pounced on me, suspicious, with their trains and their trailers, their transmissions, their cylindrical hardware, with the faces of the drivers in the rear window, mocking , with devilish clown masks framed in a blue circle. The whole industrial movement on the outskirts of the city was a collapse, the winds uprooted trees and several accidents took place, they were the saddest hours of my life, it was to gamble between doom, noise and misfortune. Like a fatal nightmare, I came to think that this was the day of judgment, it was my end, my last vision of the world before culminating _report_ as a mass of snot on the side of a highway. Lightning was falling from the sky, incessant lightning like fire in a dragon's mouth, I thought one of them would split me in two, I thought I was already dead and now I was fighting not to cross the gates of hell; I was deaf, agonized by such sonic contamination, in the middle of a scene of horror that took my steps away, that made my feet weigh and I only thought about ending everything, I only thought about returning..._

But, to go back to where? How to go back? The four horizons were the flood and if for some reason my calculations were to fail, I would end up under the wheel of a truck... The rain continued and hit me, threw me to the ground, it was punishment, he wouldn't let me see...

What a damn irony! My clothes were no longer worth anything and the wearer of the outfit, less so, that one, who left home with the hope of getting a job, was now just a decomposed man who was embarrassing, with water up to his neck, On the side of a damn highway, on the outskirts of a damn town.

I untied the tie and threw it far away, I also threw the _coat_, which only held the water as if it were a sponge, the shoes had fallen apart when walking; flee, escape, agonize or whatever you call what I had just done. During the continuous four and a half hours that the storm lasted, like this, I kept walking in socks, until they also vanished on my feet...

And in my mind, those voices:

For an infinite moment, the voices of those men were everything to me, they were a strange prophecy, a cursed legume. The decision that I should have made and never did...

I still hear them: