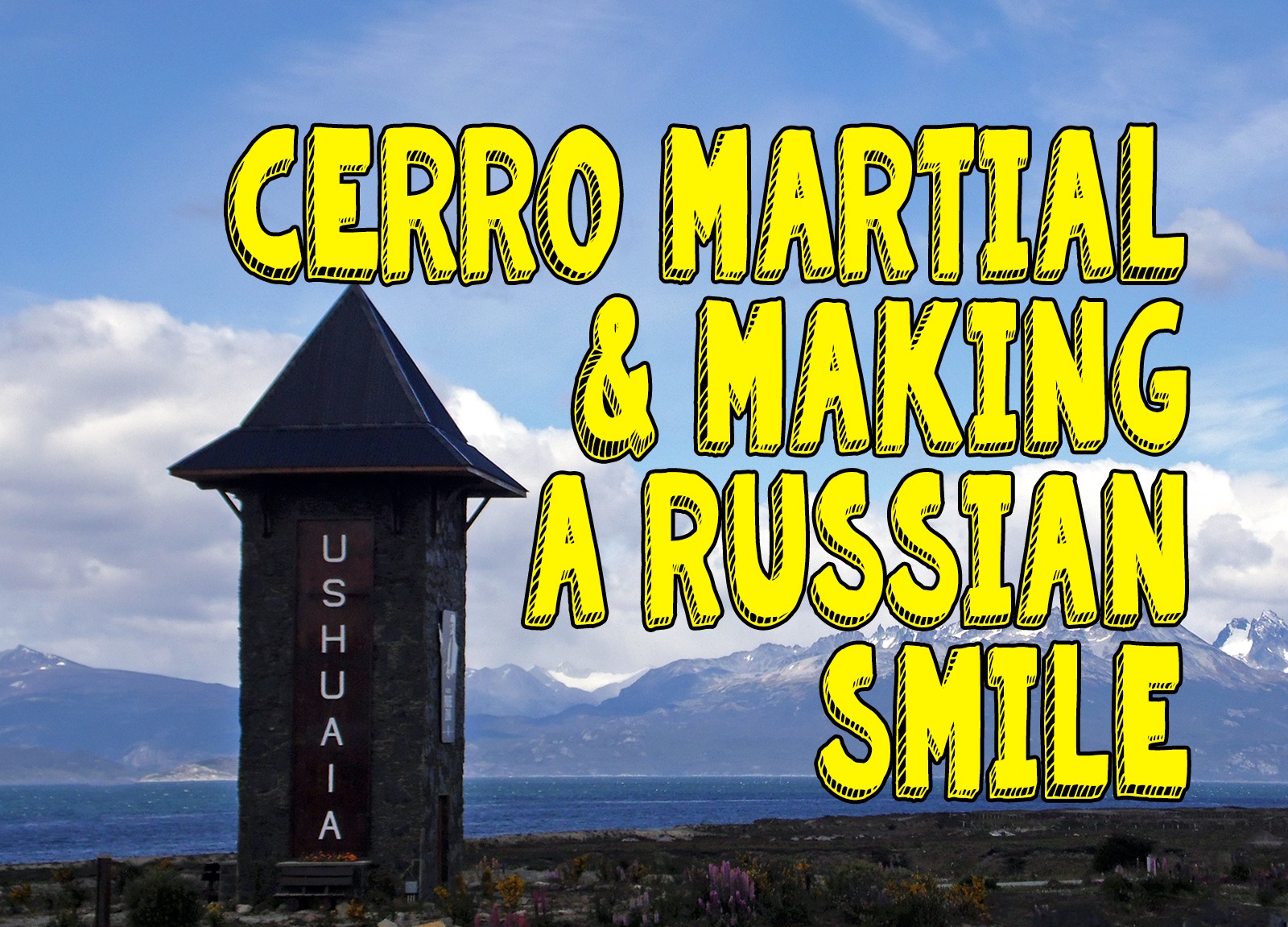 Read "Travel Story: Hitchhiking to Ushuaia | Tierra del Fuego | Over the Mountains" on TravelFeed.io for the best experience

Hooray you Steem warriors! Let's check this Patagonian story to distract from the Steem madness.

What an insane past week for the community! The Steem warriors are still standing ground to defend the Steemland from external forces of doom. It's not being easy so far, but as long as we remain united we shall win this battle!

To bring a little bit of diversification to the Steemphere, and to present something exciting and different for the sexy readers while those relax a bit from the fights, I'd like to share one more of those insane Patagonian stories.

On this post I'll take you to Ushuaia, on the island of Tierra del Fuego. This episode comes after the visit to the King Penguins preservation zone presented on my previous post, and is part of a series of posts shared my blog.

The collection of posts can be read without any connection to each other, however, if you wish to read the full story in sequence and with more details stay tuned to my blog for when I announce the book!

This happened when I was hitchhiking Argentina and Chile in summer 2017. Carrying only the essentials and little money for the journey. I had left Buenos Aires in early January with the main goal to reach Ushuaia, the southernmost city in the americas. Plan was plain an simple: Work if needed, camp, hitchhike all the way, have loads of fun and let my desire guide the way.

After waiting near the city of Rio Grande, on an incessant and cracking wind, where standing up to to lift the thumb was a clumsy struggle against the sheer forces of nature and gravity, I finally found a ride to Ushuaia.

It was nearly night already, but I could see that the road to Ushuaia headed in direction of the pointy peaks covered with snow that I had been dreaming of for days. Once more the landscape had changed completely from the plain dry and dusty fields I had been traveling on, the long straight lines were giving place to the ups and downs of the valley, the S turns shifted us left and right. The night was dark outside, the only vision I had to contemplate was the gloomy shadow formed by the long trees on the forest.

― We’ll go over this valley and Ushuaia is right after… it’s a pity you won’t be able to see the Lake Fagnano from here.... ― Marcelo, the driver, said.

The journey so far had been amazingly beautiful, yet tiring. The dry weather had affected my eyes for some reason and my body suffered from the endless hours hitchhiking, along with that I was breaking the record with five days without a shower, luckily for the sake of everyone’s nose it was cold enough to not sweat, which maintained the stickiness under control.

Being deprived from certain essentials really makes us wonder how most of our daily routines are undervalued, things like a shower, easily accessible hot water, a real bed to sleep on, clean clothes, food. At home it’s just there, under reach, we can simply turn the faucet and it’s available, we don’t even think about it nor take the time to appreciate, and sometimes we’ll even lazily complain about taking a shower.

On that night in Ushuaia however, when I decided to spend the night in a backpacker’s hostel, the moment I turned the faucet on and hot droplets of water ran down my body I immediately felt grateful for having that moment, like an immediate feeling of happiness, it felt like some magic button was activated on my mind and I could contemplate the powerfulness of a renewing shower. That’s where true happiness is, on the simple things of life.

January 8th, 2017. To my astonishment, and also to put an end to my starvation, the hostel offered a breakfast consisting of cereals, milk, black coffee, bread loafs and a few tasty sweet jams, everything offered on the big common area where backpackers from all over the world clustered on the long benches to eat and exchange experiences. On that noisy and energetic room would be the first time I had the chance to sit and appreciate a meal properly, without the rush of jumping on a truck before hitting the road. Above all, I wanted to take the time and, for once, contemplate the surroundings calmly, maybe write something on the diary, read a book by the canal or photograph the landscape.

The days on the very tip of the Americas during the summer are long, which gave me plenty of time to wander endlessly on the streets and docks. The weather, on the other hand, is unpredictable, the southern winds that come from Antarctica cut through the city with a freezing force that make you stop when going around the corner. Sometimes, the sunny blue sky turned grey out of nowhere, turning a completely fine day into a rainy mess. It’s not for nothing that people say that in Patagonia you get to experience the four seasons in one day.

Ushuaia has an incredible history that traces back to prehistoric times, in fact, the name Ushuaia is a combination of two words from the Yagan language: ushu, a term that is difficult to translate with the meaning of something that penetrates widely towards the west, and ayah, that means bay. The result can be interpreted as "bay that penetrates deep inland in the west direction".

On that day I decided to see for myself, from the top, the deep bay I had just heard of from researching on the internet while sitting on a bench overlooking the Beagle canal. Luckily, I met with Vadim, my russian friend, and we both decided to walk up the Cerro Martial together, a path that cuts through a poorer area of the highly touristic city and ends in a steep climb with some flat loose stones amid long straight trees and along a freezing crystal clear river that runs down the mountain from the glaciar above.

The cerro Martial is one of the hills behind the city, it is sided by Mount Olivia and both overlook the Ushuaia Bay, where the city is nestled at the northern limit of the Beagle Channel. The view from the top of cerro Martial was particularly unique as the landscape funneled amid two hills where the stream runned down, and culminated with an astonishing third plan view from the Ushuaia Bay with all the boats anchored on the Beagle channel. Further back sparse islands followed the channel and I knew that behind it all laid the fearsome Cape Horn, avoided by every sane navigator in existence.

Once again I tried to imagine how it must’ve looked back in 1520 when captain Fernão de Magalhães first entered those waters, whom he named Tierra del Fuego. Fast forwarding to the 19th century, when captain Fitz Roy brough Charles Darwin to document the area, If I closed my eyes I could envision Fitz Roy’s ship, the HMS Beagle, with its pointy masts standing up, anchored on the channel that was named to honour it.

That day was topped out with me cooking a typical brazilian meal to show my russian friend what real food tastes like; the menu was a mix of vegetables with meat and rice, simple indeed, but effective to make a russian friend eat twice and even smile for a bit.

― You are a good cook! ― He said in a heavy russian accent.

The backpackers hostel was again filled to the max with people exchanging experiences and playing guitar, people drinking Mate and sharing meals, everyone piling over each other to access the stove in a chaotic dance between hungry backpackers.

The next day some even crazier adventures awaited, when Vadim and I would challenge ourselves to a mission to sneak in the Lapatia park without getting caught by the guards. But for that you'll have to wait for the continuation post.

Did you like reading this story? If I wrote a book, with even more details of the adventure, would you read it? Drop your answer on the comments down below!

Your Publication Has Been Voted Manually 15%.

Niice, thank you for the support!

@mrprofessor ir is a pleasure.

Congratulations! Your post has been selected as a daily Steemit truffle! It is listed on rank 4 of all contributions awarded today. You can find the TOP DAILY TRUFFLE PICKS HERE.

Congratulations @mrprofessor! You received the biggest smile and some love from TravelFeed! Keep up the amazing blog. 😍 Your post was also chosen as top pick of the day and is now featured on the TravelFeed.io front page.

Thanks for using TravelFeed!
@elsaenroute (TravelFeed team)PS: You can now search for your travels on-the-go with our Android App. Download it on Google Play

Hiya, @itchyfeetdonica here, just swinging by to let you know that this post made into our Honorable Mentions in [Daily Travel Digest #791](https://steempeak.com/traveldigest/@steemitworldmap/travel-digest-791).