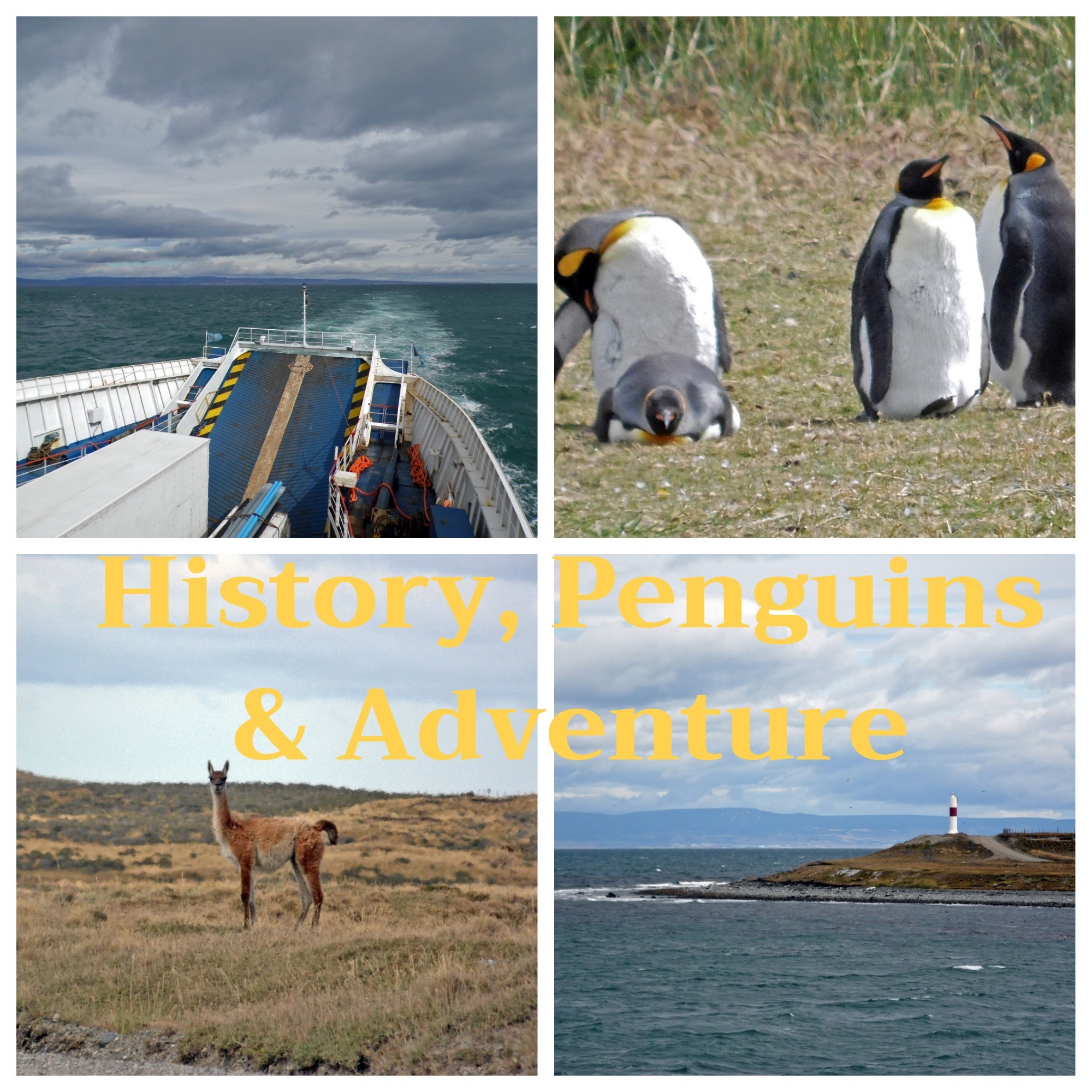 Hooray you sexy readers! How are you? Bringing one of the crazy Patagonian stories.

Warning: This is not a particularly small post, but I gave my absolute best to make it as dynamic as possible for the reader. Enjoy!

As I look back on my Steem timeline I realise how things have evolved in a great way and I feel happy I have left behind the frenzy of posting every day. Not only I've been prioritizing quality over quantity, but I've also been busy on the background, which itself ends up soaking up time that I would use on my own content.

This time however, inspired by the ever growing Travel Feed platform and by the Travel writing contest No.6 by @invisusmundi, I've decided to burn some brain cells (not many left) to bring back one of those crazy Patagonian stories.

On this story, I'll try to transcript into words how it feels like to step for the first time on one of the world's wildest and windiest lands in the world: The Tierra del Fuego.

This happened when I was hitchhiking Argentina and Chile in summer 2017. Carrying only the essentials and little money for the journey. I had left Buenos Aires in early January with the main goal to reach Ushuaia, the southernmost city in the americas. Plan was plain an simple: Work if needed, camp, hitchhike all the way, have loads of fun and let my desire guide the way.

January 6th, 2017. After thousands of kilometers of nonstop hitchhiking the Atlantic coast on the famous Ruta 3 in Argentina, I had finally reached the small city of Punta Arenas in Chile, where my friend Carlos offered me a bedroom to sleep after taking me, as a complete strange by the side of the road, from Rio Gallegos.

- You can stay in my house tonight, amigo. - Said Carlos.
- I appreciate that a lot! But I don't want to bother, as I need to go find some supplies for the journey. - I kindly said

I still needed to buy a pair of hiking pants, food supplies and also figure out how I'd cross the Estrecho de Magallanes to continue hitchhiking further south.

- There's no problem, I'll show you around. - Carlos repplied. That was my first contact with the well known superb chilean hospitality, the first of many throughout that summer.

The days were longer on high latitudes and even after driving for 300km, Carlos took the time to drive me around and quickly managed to find out about the tickets for the next morning ferry, a good deed that I'll never forget.

The biggest advantage of chosing the longer crossing in Punta Arenas is to seize the opportunity to resupply on the free zone, a port area with a concentration of shopping malls where it's possible to buy almost everything with reduced taxes, which I gladly did, to buy a pair of well needed pants.

That's how we spent that day, wandering around and figuring stuff out, as my money was absolutely short which made the shopping challenge into a frustrating experience - you don't want to visit an awesome camping gear store without money, trust me!

January 7th, 2017. The big day. Early on that morning I'd be crossing the famous Strait of Magellan, a name I had only heard on books from early explorers. I was feeling a mix of anxiety with tireness, my body was not yet adjusted for higher latitudes, dry weather and having day light untill 10:30 PM was certainly affecting my sleep, however, there I was, prepared to onboard the ferry.

The lines were released, the green waters turned white and the ferry shook when the sheer force of its engines turned us around the port. For the other passengers perhaps it was just another ferry crossing, for me a guarantee adventure.

I couldn't help but trying to imagine how it must have been to navigate those cold waters back in 1520, when portuguese Capt. Fernão de Magalhães first crossed the strait while on his global circumnavigation voyage; if I was feeling safe on a sturdy steel ferry, I wouldn't be so sure inside a 16th century wooden sail ship, the winds were strong, even on that calm day.

I was also trying to visualize the mystic behind the name Tierra del Fuego, when the explorers first spotted scattered fires and columns of smoke from the native fires, which seemed to float on the water in the early morning fog - story tells that the name comes from this scene.

I spent the three exciting hours walking up and down the decks aboard the ferry until - land in sight!

I was officialy touching the Isla Grande de Tierra del Fuego, a land I had been aiming for the past week. Now, teamed with a russian friend called Vadim, the objective was to hitch a ride towards Ushuaia.

I didn't know anything about penguins nor the place he was pointing at, but the tall and serious russian dude seemed friendly and didn't speak much spanish, so I accepted to join the comrad. It didn't take long for a pick-up truck driven by a young farmer to stop to give us a ride.

We jumped in on top of farm tools and introduced ourselves following that same conversation script that we only broke to joke about the shotgun that was laying around.

- The gun is needed to hunt, to take care of the farm. - He said.
- Oh, is there hunting around? wild boars? - I was curious.
- Nooo no, not wild boars, it's stupid, listen... Did you see the hares and the foxes? - He asked.
- I think I saw them on the road. - I said.
- So, they are not native! It's funny... someone brought hares to Patagonia, but they scaped and procreated, a problem, you see. So yes, since there's no natural predator they decided to bring the foxes to fix the issue. Problem is that those foxes discovered that it's easier to hunt sheep... now we have a problem with hares and foxes!!! - He explained laughing.

As absurd as it sounded, the environmental mess was true and even agravated once the Pumas, the original predator from those lands, was hunted massively in the past. Even though the hares, foxes, guanacos and other animals had plenty of space to coexist, they were still unbalanced, forcing the farmers to act.

I do not endorce hunting, unless it's for subsistence, but if the natural balance is endangered because of non native forces and hunting is the only measure, then so be it.

The young farmer was talkative and friendly enough to stop for photos, he even deviated his original course to take us to the preservation park, what a legendary dude.

- Well, friends. Here we are, the Parque Pingüino Rey. It was really nice meeting you. - He said before driving off.

On that remote area on the west cost of Tierra del Fuego is hidden one of the gems that I'd never have discovered if Vadim hadn't told me.

The wind was unbelievable near the coast called Useless Bay, named in 1827 by captain Phillip Parker King, because the Useless Bay "afforded neighter anchorage nor shelter, nor any advantage for the navigator".

If it wasn't of any utility for Capt. Phillip, it was for sure a blessing for us, as it is one of the few places to spot the King Penguins outside of Antarctica. The King penguins are the second largest especies of penguins in the world, a clumsy and funny animal. What an experience!

Sitting there, watching those wild animals, only sparked my dreams of visiting Antarctica, an experience that I can only imagine through the words written in books such as the ones made by Amyr Klink, a brazilian sailor and explorer.

Some say that the more we dream, the closer we get to making it a reality; I like to believe it's true. For one year I kept on saying I'd go to Tierra del Fuego, and now I was there. I still had a few kilometers to get to the very tip in Ushuaia, but for a moment I forgot about it and concentrated on enjoying that moment.

Right in front the King Penguins, sticking together to protect themselves from the wind, were the main attraction. On the other hand, a more attentive eye would also spot the small fox slowly walking amidst the green grass, or the hare with its pointy ears trying to be unnoticed. The seagulls could barely fly on such strong wind gusts, they'd take off and plane around before landing. The whole place was alive. I was happy to be alive.

This story continues, parts of it have been released already on this blog, others will be compiled and hopefully made into a book in a near future. Would you be interested? Let me know on the comments.

Did you like reading this story? Have you ever felt that alive!

It's just a matter of going! Once you start and find momentum it'll be hard to stop.

Thanks for writing this comment through TravelFeed.io!
You have received a 8% upvote from us. We hope to see you soon on TravelFeed.io!

Penguins in a dry place? that's an interesting sight.

Exactly, I had seen one or two in my lifetime that had lost their way on the ocean, but a full colony is just awesome.

Hiya, @LivingUKTaiwan here, just swinging by to let you know that this post made into our Top 3 in [Daily Travel Digest #713](https://goldvoice.club/steem/@steemitworldmap/travel-digest-713).

Weheee, thank you so much!

And, yes, dreams come true - I know that for sure!

I am very glad that you got to where you really wanted to get.

Thank you for the comment! They are indeed peculiar animals, problem is that now I want to go to Antartica to see a bunch of them \o\