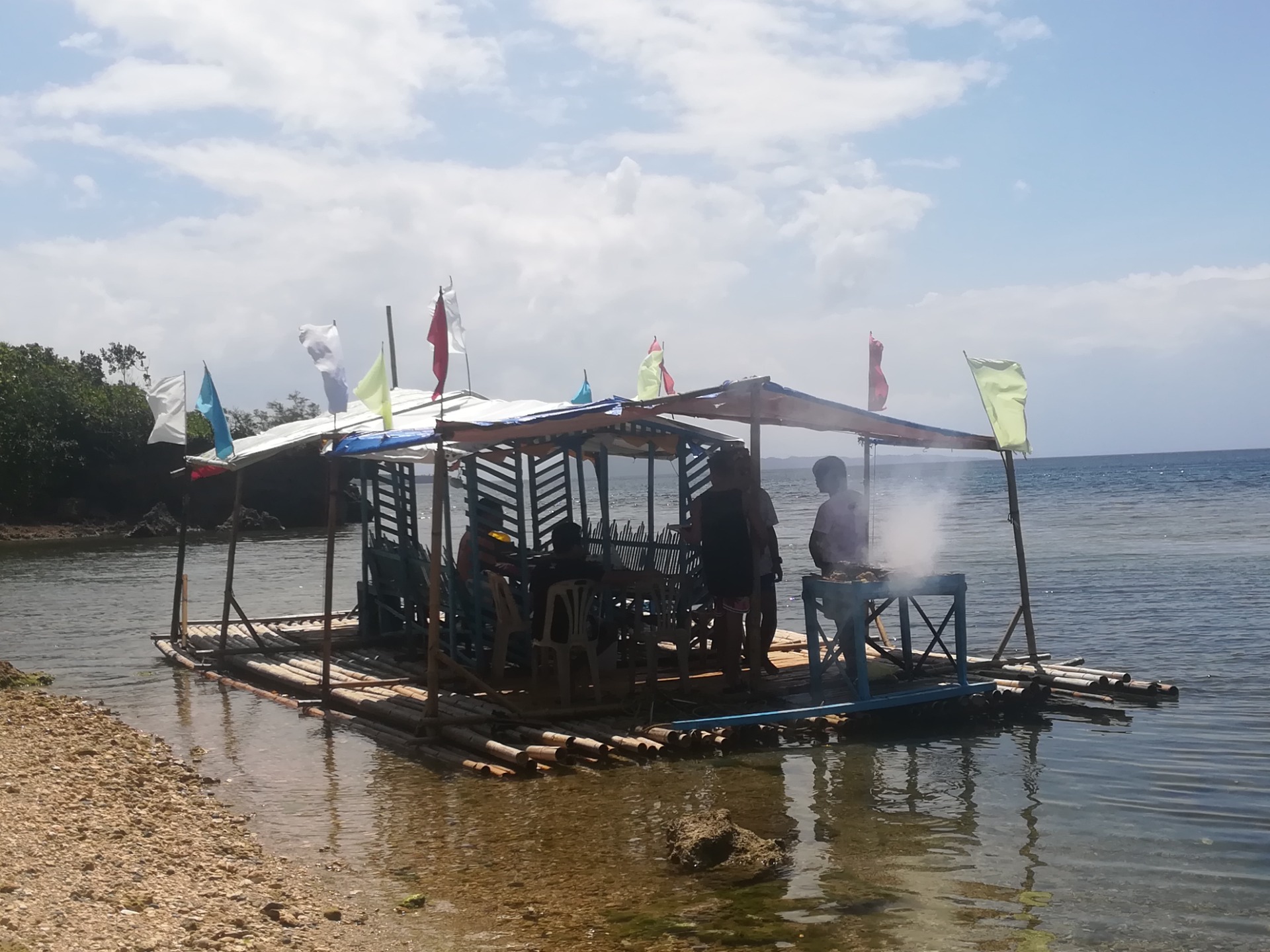 Floating cottages in our town became popular with locals. Not just in our town, I think because I saw other floating cottages in the whole province. Most of them are the same style cottage but there are those well made. Of course, the price is a bit higher compared to simple cottages. For me, the surrounding matters the most because they are all the same along the sea after all.

It's not just we're having fun from the sea. We had fun going there like we had an adventure. Although, the road to go to that place was a bit rough. It's not a concrete road that you usually see in the street. Also, the surrounding was nice because of the trees. It's not that far though to arrive in that place. But because of the road, we drove the motorcycle slowly. We consumed more time that we never thought it would be. Even so, it's fun to travel to see a green environment.

The first time we arrived in this place. All I noticed were the location of the rocks. They were like small islands and there were those just growing. Rocks here had a sharp characteristic so I was careful in walking. The sea right here was low level or not deep. When I came nearer to the cottage we rented. It's near the shore but the seawater near it was below knee level. The good though the cottage was the size and its design.

When I said the rocks that caught my attention. I made sure not to miss the view and store photos of this place. I did it, I took a short walk from the cottage to arrive near the location of the rocks. I'm using my phone when taking pictures so forgive me for not so pretty quality. But you can still see clearly the looks of the shapes and formations. I mentioned small islands but it's not far from the shore. lol

This part right here was not similar to other places in the town. It's not the same in our place turns really dry during low tide season. It's not deep but it's not that low. Unlike the sea in our place for those live stones will rise if it's low tide. You can see and feel the stones under only. But you can't find different types of seaweeds here. They said there were sea urchins but it's not easy to find.

I went back to the cottage when my friends arrived. The location of the cottage was not near the shore. It's up to you to decide where do you want to be as a tenant of it. Ropes were being tied under the rocks. It serves as the boundary or to make sure the cottage would not just float in random places. You can see that the owners pushed and pulled it to be in a place the tenant desires. But it was not deep during that time we were here. The sea was low and they couldn't pull it in a deeper part of the sea right here. Good thing there was a place we found to enjoy a deep-sea and you know some jumping off the cliff.

I captured images of my friends jumping off the cliff. I could tell they were enjoying it. Maybe the height where they were jumping was approximately 10 m. I'm not sure because I'm not good at estimating distance. Let's just forget the height and be there to have fun jumping

I had a great time spending in this cottage. Not just because of having my friends but because of the amazing feeling I had to be in this place. The crystal clear seawater, the remote surrounding and the peaceful feeling. The cottage was cheap. We rented it for 500 pesos or 10 USD. You can grill food here and you can boil food or cook food here As well. There's a small boat you can borrow for 100 pesos or 2 USD if you want some paddling. lol

Thank you for rreading

images are mine, Huawei p8

View this post on TravelFeed for the best experience.
hive-163772travelhivephphotographyhivephilippinesneoxianpalnetnaturalmedicine

Congratulations @mrnightmare89! You received the biggest smile and some love from TravelFeed! Keep up the amazing blog. 😍