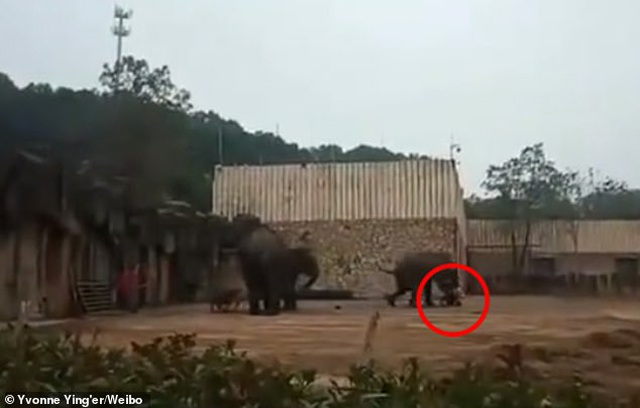 A male elephant trampled on staff at a Chinese zoo to the horror of visitors.

According to Dailymail, the incident happened last week at the Changsha Ecological Zoo, Changsha, capital of Hunan Province, China. The attack occurred just before the zoo hosted a circus show on December 24. A video of the incident was recorded by a visitor while waiting to see the performance.

The Asian elephant, named "Ai A", has lived in Changsha for the past 10 years and is mild-tempered. While waiting for the show, it attacked Bu zoo's zoo staff in front of everyone's surprise.

When the incident happened, five other zoo staff tried to calm Ai A down before he took Bu to the hospital. However, doctors could not cure because Bu's wound was too severe.

The video recording the incident posted on Weibo shows that Ai A is one of three elephants present at the scene. Ai A pulled Bu on the ground and the victim seemed to be unconscious then.
One witness shouted "run away, run away" while others screamed in panic.

According to zoo experts, the attack occurred at a time when Ai A was in the mating season. At this point, if an elephant cannot find a mate, the animal's hormones will secrete it to become out of control, aggressive and personality-changing.

The zoo locked Ai A in a separate shed to isolate it from other elephants.

Open since 2010, the Changsha City Ecological Zoo has 6 Asian elephants. Animals are trained to make circus, play football and dance.

Police and regional ranger agencies have now investigated the incident.