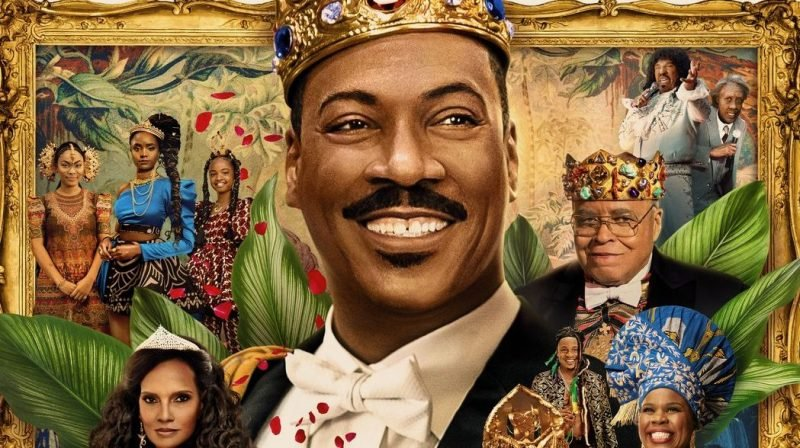 Welcome to another movie review here on the Steemit Blockchain.
I am Movie Monkey and am a true film addict.
Hope you enjoy my reviews. May contain spoilers.

33 years on from it's 1988 counterpart movie, we find ourselves back with the funny duo that is Prince Akeem and his trusty servant Semmi, in the fictional African nation of Zamunda.
Akeem and his Wife Lisa, now have three fierce Daughters; Meeka, Omma and Tinashe.
As Akeem's Father, King Joffer, lies on his deathbed and discusses his impending passing with his Son, he decides that he wants to have his funeral whilst he is still alive so that he may witness the event for himself.
King Joffer looks on from his upright coffin as his funeral celebrant, Morgan Freeman, gives his pre death eulogy.
His funeral, along with it's amazing African dancers and the musical cameos provided by En Vogue, Salt and Pepper and Gladys Knight, is enjoyed by all.
Akeem is visited by General Izzi (Snipes) and his warriors who wishes for him to agree to a marriage between their families.
Akeem later discovers that during his first trip to America, he unknowingly fathered a Son.
As Zamundan law dictates that the throne may only be passed on to a male heir, Akeem and Semmi once again embark on a journey to Queens in search of his Son to secure the future of their monarchy.

It's not long before they successfully find Lavelle Junson (Fowler), who is extremely surprised to learn of his royal heritage. Both Lavelle and his Mother, Mary return to Zamunda with them in order to complete the Princely test.
Once in Africa, the new guests cannot believe their luck and relish in their new lavish surroundings.
However not everyone is happy with the situation. Lisa and her three Daughters aren't so welcoming. Especially Meeka who had hoped that one day that she may be crowned Queen of Zamunda in her Fathers place.
Lavelle settles into his new life in the royal palace, and both him and his Mother are overjoyed with the fine dining, servants who bathe them and the luxurious clothes that they get to dress in.
General Izzi visits once again and introduces his Daughter to Lavelle and proposes that she should marry Lavelle in order to join their families together.
Lavelle is taken back by her beauty and agrees to the marriage.
General Izzi's army is Akeem's greatest threat therefore he wishes to draw an alliance with him to secure a war free future.
Lavelle spends the next few days being put through his paces to complete the Princely Test. He must show that he has knowledge of the Zamundan culture, critical thinking and courage.
The latter is probably the most funniest to complete as it involves being able to cut the whiskers from a resting lion.
Lavelle meets Mirembe, the royal groomer, who cuts his hair in to a more royally appropriate style.
He enjoys speaking with her and she gives him some good advice about being who he really is.
Lavell still has the courage test to complete. Meeka, although initially hesitant to build a bond with Lavelle, helps him to complete the task.
After he has finally completed the test and declared as a Prince, he spends more time with Mirembe who tells him that although it is forbidden for women to own businesses in Zamunda, that she dreams of one day opening her own hair salon.
The Prince tells her that he wishes to be with her and they share a kiss before she rushes away and reminds him that he is to be married soon.
The next day during a royal party and whilst talking with his intended bride, Lavelle realises that he wishes to marry for love and not just convenience. He wants to have a connection to the person he spends the rest of his life with.
He decides to flee Zamunda and return to America with Mirembe.
King Akeem and his wife have a disagreement and she tells him how angry she is that when he was a Prince he vowed to make changes for the better but he has not.
She makes it clear that Meeka is disappointed in not being able to be the next in line for the throne.
Akeem tracks Lavelle down in Queens and finds him and Mirembe about to be married in a dingy old back street church. Akeem stops the nuptials and they decide to travel back to Zamunda so that they can be married there instead.

Akeem realises the error of his ways and that Lavelle decided to marry for love just like he did when he found Lisa all those years ago.
He issues a decree which states that Meeka will be named as heir to the throne and Lavelle will be an Ambassador to America.
Everyone is happy with the announcement and they continue in their celebrations at the party. Even Akeem and General Izzi reconcile. A happy ending for all!

The first movie, Coming to America, was great. It had good actors, hilarious comedy and a solid storyline.
I was therefore slightly hesitant to watch this sequel as I tend to sometimes think that follow on films can often spoil the memory of the first one if it turns out to be awful. However I must admit that I was pleasantly surprised by this one.
The narrative ran alongside the first movie, with the messages pretty much being the same, but it still seemed fresh and modern with it's new actors who complemented the original cast perfectly.
The cameos were a nice surprise, with the vast majority of them being known to me from my younger days (En Vogue, Salt and Pepper etc).
There was plenty of laugh out loud moments and also a few cringey ones too.
I thought that the mixture of old and new characters worked really well and overall enjoyed the combination of both 'original movie' flashbacks and 'sequel movie' freshness.
The costume department also deserve a special mention too as the clothing and adornment of the characters was amazingly executed and full of such bright and vibrant colours.
The on screen camaraderie was great to see and the outtakes added a nice insight of how funny this movie probably was to make.
A bit of potty mouth swearing would probably not make this a movie to watch with young children but apart from that I think most of the family would like this, especially those that enjoyed the first one and who were brought up with 80's/90's music.
Zamunda would definitely be on my list of locations to visit if it were only real!
Movie Monkey Rating: 4.5/5