YOUR NAME ( KIMI NO NAWA) FILM REVIEW BY MISSSJ 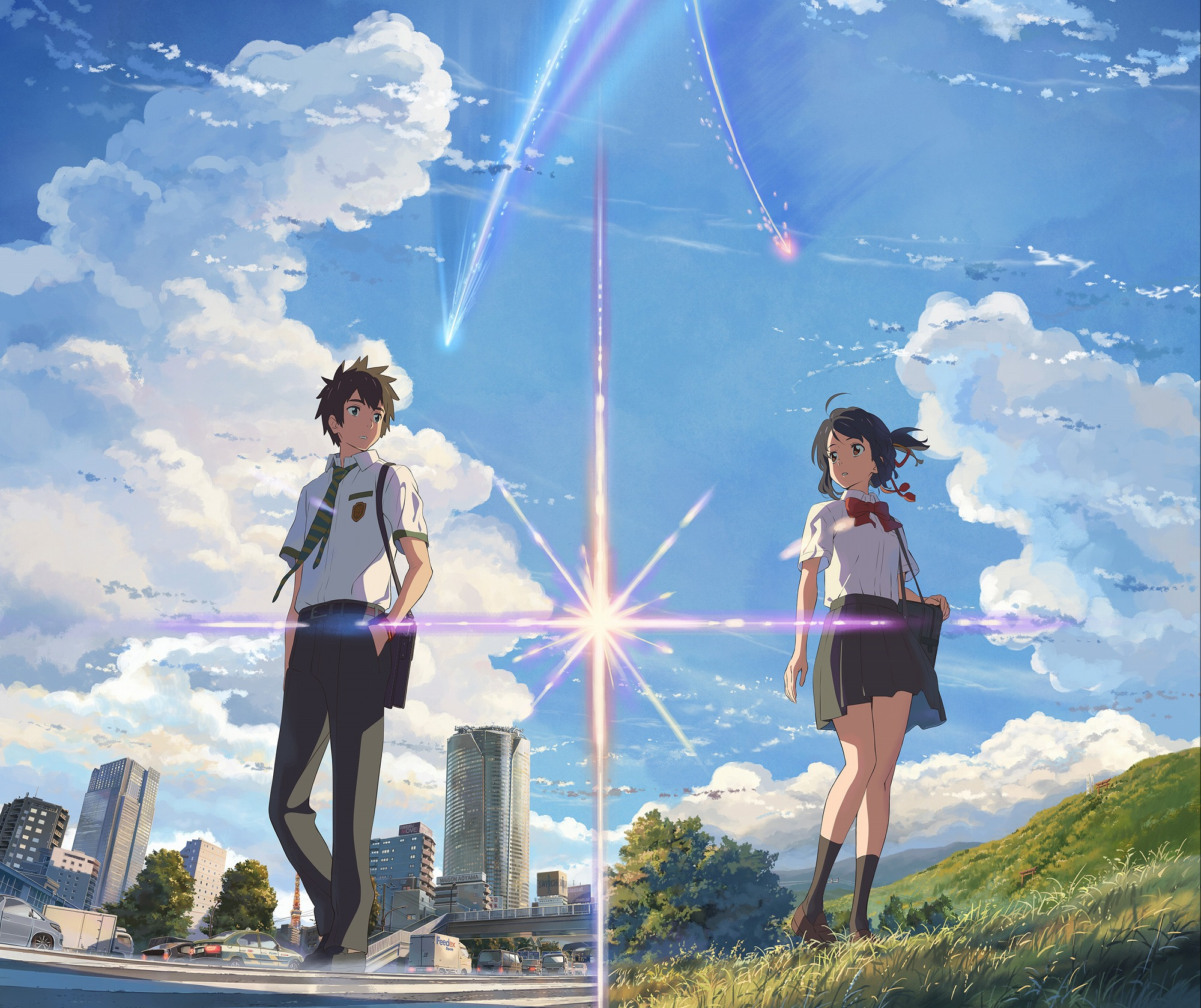 Makoto Shinkai, the guy who brought us the Garden of Words, Children Who Chase Lost Voices, Voices of a Distant Star, and a slew of other great anime films, has your name on one of the best anime films ever made in Japan. He enjoys telling stories about people who are sort of like star-crossed lovers who are separated by something. He's good at it, but it's definitely his wheelhouse, and your name fits right in with that, except for one thing: this film is a body swapping film, which I've honestly never seen in live-action or anime.

This film begins with Mitsuha, a young girl who wakes up and begins to touch herself, realizing that she has boy parts. This is normal for a girl her age, except that Taki, a boy who also lives in Japan, is currently inhabiting her body, which is strange, and that same boy Taki wakes up in Japan and realizes that he has girl parts down there.

That's because Mitsuha and Taki have swapped bodies, and the plot of the film revolves around these two characters who wake up in each other's bodies without warning and must figure out how to spend a day in the other's body as well as why this is happening. They eventually learn about each other's lives in an extremely unconventional way, and they grow to appreciate one another.

I got to see this film in an anime film that I enjoyed watching, and I got to see it with a crowd that understood it. This is a film that you will appreciate more if you have a diverse background in watching a lot of anime or if you have a basic understanding of Japanese culture because there is a lot of humor here that you will never see in an American film, and it's so refreshing, and it's also a very different story.

I've never seen a romance told by body switching, which is a very unusual way to tell a story, and the unique Japanese humor in this film, coupled with stunning hand-drawn traditional cel animation, makes Your Name one of my favorite films. This is an emotionally strong film that is not only really funny but also has a great way of really tugging at your heart strings without sounding too much like a soap opera, which I saw in 2016.

I know a lot of people are going to see this movie, and particularly if you don't watch a lot of anime or don't know anything about Japanese culture, a lot of people are going to dismiss it as a super melodramatic soap opera film aimed at teenagers or whatever. But it's more than that; this film has a lovely way of exploring Japanese youth culture and what can make two people fall in love even though they've never met because they're learning about each other's lives by pretending to be that person for a day, and as a result, you know more about the other person than you ever did.

This is such a creative way to tell a story about love in a film, and I know I've said it before, but the animation in this film is absolutely breathtaking. I adore traditional hand-drawn animation. I adore hand-drawn animation, and I'm glad Japan is continuing to create it because it's a sight to behold. The characters are so well formed that they're incredibly likable, and the film has a great way of moving from lighthearted and amusing to intense, emotionally strong, and suspenseful.

Actually, a lot of drama D style films have a hard time bridging the difference between those two different feels where it starts off and you're like oh this is all laughs and then all of a sudden people are dying and it's like oh this is very serious all of a sudden, and a lot of films have a hard time doing that. This is a beautifully animated film that serves as a heartfelt reminder that, despite Miyazaki's ostensible retirement, great directors like Mamoru Hosoda and Makoto Shinkai continue to make excellent anime films. I'm going to give Your Name an A-Plus because I really don't have any problems with it.