The Making of an A Cappella Cover: Part 2 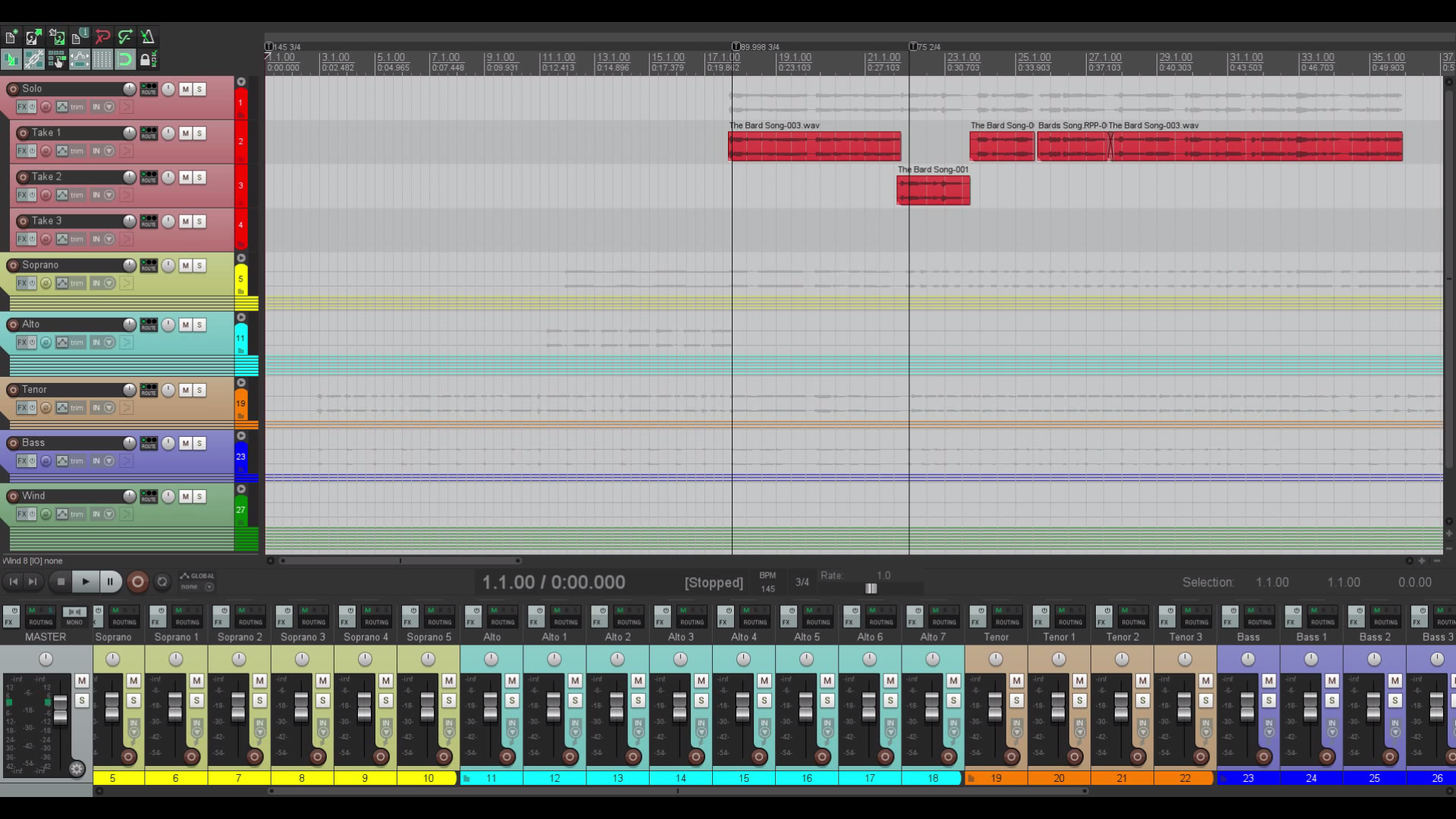 After a song is arranged I'll transport each part as an audio file and move over to a program called REAPER. Most times I use a quiet place to record. I find closets to be an ideal low budget place for this since they have loads of absorbing components (like clothes), which creates what acousticians call a dry sound. Here's where the magic starts. ;-)

ext I record the fundamental parts of the song, like bass and vocal percussion (if there are any). Usually I record several takes of a musical part, then I sync it to the audio file that it's based from. I'm using a Zoom H2n Handy Recorder because it has a built in sound card, which is important to control the gain in the recordings. To protect the microphone and avoid popping (which can happen with implosive consonants, like B-, T-, or P-sounds) I use a pop filter. When bass (and percussion) is done I repeat the process with parts for the rest of the song. If anything sounds bad I'll remove and (most times) re-record it. This recording gives you a hint how the raw sound files sounds like when the recording part is done:

It's called The Bard's Song - In the Forest and is made by Hansi Kürsch and André Olbrich for their band Blind Guardian in 2003. The a cappella arrangement is a mix of the original song and a cover that Van Canto made. Sometimes when recording I get an idea like what if I did [this] to the recording? The wind part is an example of that in this song. I felt like the song didn't have a real ending. Then a thought hit me to record some (a cappella) wind sounds to symbolize that the song was carried away. Not everything I arrange or record makes it to a final product. This recording, as an example, was never planned to be showed to the world, since I wasn't satisfied with the sound. But some good came out of it, like the idea of record wind sounds was used in my Bohemian Rhapsody cover. (^_^)

If you would like to use free software to achieve what I do I recommend Audacity or Traverso. I chose REAPER since you only have to pay once for the software, and it has free tutorials on it’s website that goes through every process and all the effects, what they do and how you can apply them. Most of the information for the REAPER-tutorials can be transferred to other multi track recording software. For example: You can watch how a compressor works in REAPER and then search how the same thing works in what program you would like to use. ;-)

P.S. If you want to know what a dry sound sounds like,compare today's clip with my Come Together cover:

Very impressive :) when you said that you would show your way to produce those magnificent voices, I did not think it would be so detailed, I took note of how to achieve a dry sound, cheaply! I will put some clothes on my recording site since it is far from the closet, and I will investigate if the sound card of my pc works well, about that I know very little.

The comments from curators are for information and encouragement. The upvotes from nTopaz and rankings are based on the popularity of your art work when posted to the nTopaz platform.
Join nTopaz Discord Channel

The reason I choose a small recording space is also that it gives smaller reflections (reverb). But as a negative side effect it means you can only record shorter periods of time, since the air gets bad quick ...at least if you sing a lot ;-)

Copied, I will do my best. The space where I record is something wide...

Hello @mikerophone279, thank you for sharing this creative work! We just stopped by to say that you've been upvoted by the @creativecrypto magazine. The Creative Crypto is all about art on the blockchain and learning from creatives like you. Looking forward to crossing paths again soon. Steem on!

Thank you @creativecrypto! \(^∇^)/
All publicity is good publicity! ;-)

Very interesting to see some of how you do your work. The software you use helps, but a lot of work still goes into what you produce. Thanks for sharing how you do it all!