A Digital Marketplace on Steem 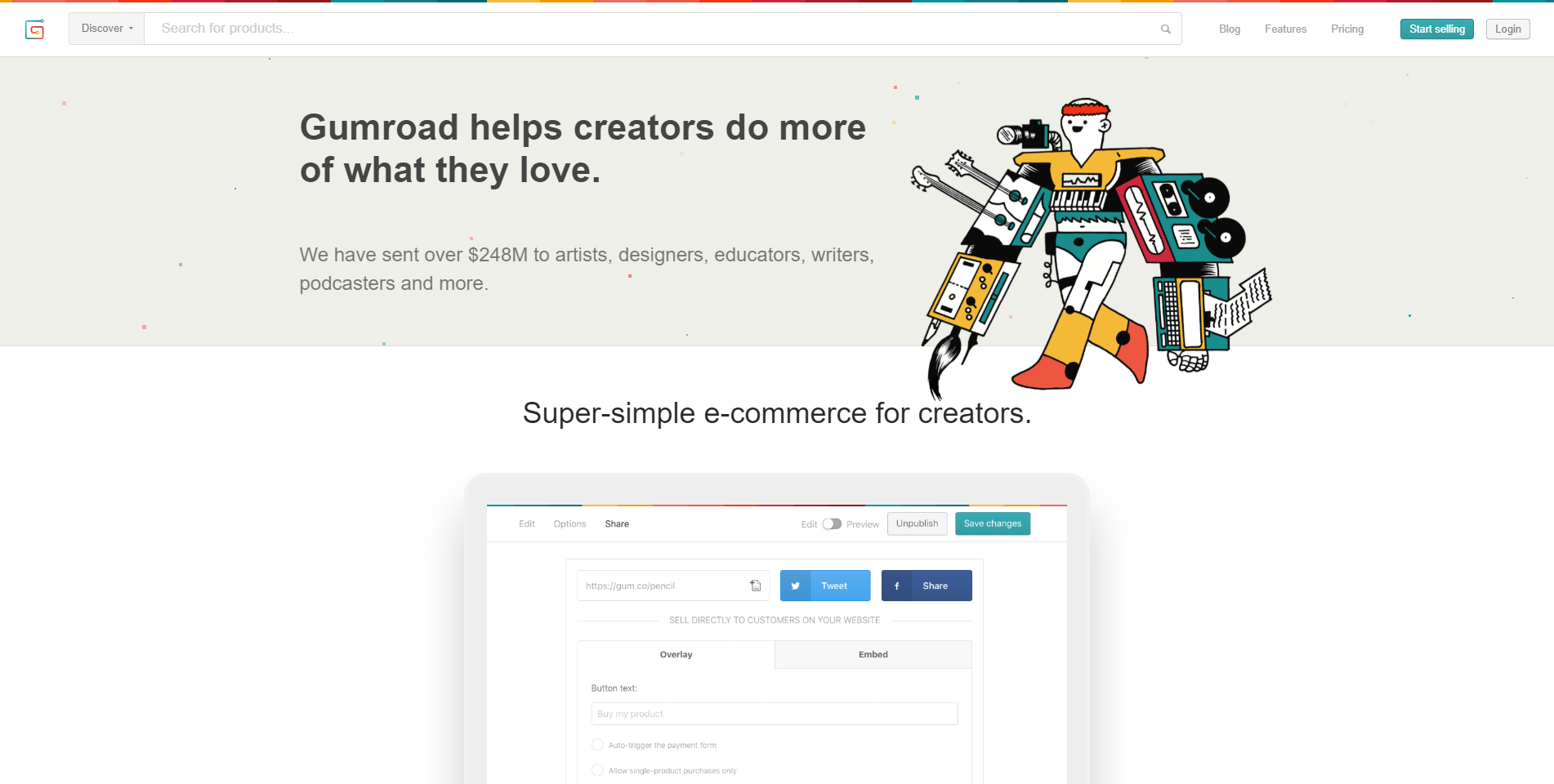 Steem needs a digital marketplace. This is another idea that sort of feels like a no brainer that we should have here on Steem. With the announcement of the @openseed project, it seems like it might be a good candidate for an application to be built there.

The service that I think resembles closest to what I think would be great for Steem is Gumroad. It's a content agnostic digital marketplace that allows you to sell whatever digital goods you want. You can set up a page, set prices, including free, and earn. It's really simple.

I think we've got faucets more than covered here on Steem, we need more sinks and some are working on that, but something like this falls in the realm of a use case, which I think we also desperately need. Imagine you're in a writing Community, and you publish sections or drafts of a larger project as posts, then sell the final. If others are doing the same, you can use the Steem you earn to buy and support their products. Same with music, same with visual art, same with scripts and software. Something like this would be the next step in creating a real parallel economy here on Steem where the Steem goes full circle from being earned to being spent, to being earned to being spent without involving fiat at any point in the process.

The image above is from Artstation.com, the largest art sharing site online as far as I know and it's the reason I think this might make a good Openseed project.

I see the natural lifecycle of communities growing into something like this.

In this lifecycle, the different communities, depending on their level of maturity, will probably need their own specific marketplace that exists on their frontend, and where their users buy and sell goods.

Having an open source turnkey solution that would be accessible to all and that wouldn't require each new Community to reinvent the wheel would be extremely powerful, and would really showcase the power of Steem and this open source vision I think we should be pushing here.

What do you all think? Is this something you'd like to see? Let me know in the comments. :)

Steemleo is putting the finishing touches, from what I understand, on their digital marketplace. I think they were working to get the DEX upgraded first and then follow up with the marketplace.

That said, I wholeheartedly agree. I think there should be a number of them on Steem catering to their respective followers.

Hadn't heard about that. That would be amazing. Leo is killin it!

Pretty certain that Steem-Engine is going to facilitate this in the very near future.

Liiiike on SteemEngine.com or as something everyone can use? Either way, that's exciting news! :D

we'd love to see a decentralized protocol that multiple sites can use.

We need this, thanks!

I think you should definitely put this forward to the Steem team, because it's a pretty great idea!

Most people on Steem, from what I can see, are content creators - animators, designers, photographers, writers, bloggers, etc... So, creating an online store, where these creators can sell their works is something that should definitely be added onto any content creation/sharing/consumption platform, such as Steem.

I would imagine animators and designers selling their artpieces, photographers can sell their photos, writers/bloggers might be able to sell short stories... It'll have endless possibilities to sell their creations, or perhaps merchandise to people who might enjoy them :-)

There is/was @steembay (I don't know it's going at the moment as I haven't needed to use something like this yet), and also Homesteaders Co-op so I always figured it would be a given that everything else that felt a need for it would have it eventually.

In the meantime someone making something to make that easier to set up probably would be welcomed :)

Interesting you mentioned Gumroad. I published an e-book there recently 👉👉https://gum.co/yrTYo

This will be a exploding feature here on steemit for the artists like us. I am really searching for these types of platforms to sell my services. I currently sell my services on fiverr but there fees are ridiculously high at 20% and after that paypal charges 8% so overall I lose my 28% money without no reason. If any platform is set up on steem blockchain and we can sell our services there, we will really save a lot. I wish this feature will definitely take shape in the future.

Yes, I'd like to see something like that. The tools are already here (Communities, tokens, tribes, etc...), but this is no guarantee of success. There's many communities right now out at Steemit, some will grow, some will fail, as always.

homesteaders coop has had a marketplace up for some time now. It uses a plugin for Woo Commerce that allows participants to charge Steem or fiat.

Click Track Profits has just released Firepay which will facilitate selling using tokens. We just interviewed jon on Curation Corner yesterday. The recording will be up either today or tomorrow on my blog.

ShadowsPub
Looking for writing inspiration? Receive a set of prompts via email every day. Sign up here

gumroad is great. Always enjoy browsing random stuff through there because it's a place where those that will likely face problems or get banned anywhere else go to host their content/ e-business.

I love the opensea approach. sellers can add 1-2.5% for affiliates to get help to find buyer.

Great idea and a great fit for Steem, I think. I could see this sort of concept working for the Open Source Ecology Project where people will be able to buy and sell plans and components for projects their completely open sourced construction projects. Overall, very similar concept as the Gumroad concept you mentioned.

Oh, what a time to be alive. Seriously.

I'm selling online (traditional way) some products in quite solid quantities. And I thought about your idea a lot. marketplace on steem - how great would that be?

How could I do that? How could I pay for product in FIAT and sell it charging STEEM. As long as this problem will not be resolved - digital crypto marketplaces will be only "for fun". Real solid businesses will not be able to enjoy it. Wouldn't you agree?

I'm selling online (traditional way) some products in quite solid quantities. And I thought about your idea a lot. marketplace on steem - how great would that be?

How could I do that? How could I pay for product in FIAT and sell it charging STEEM. As long as this problem will not be resolved - digital crypto marketplaces will be only "for fun". Real solid businesses will not be able to enjoy it. Wouldn't you agree?

So when I say “Digital Marketplace” I mean the goods themselves are digital. Combine this with an approval process(a human that checks the goods are what they say they are) and a buyer review system and you can create a totally parallel economy.

What I mean by that is that it can exist totally outside the fiat world. No taxes because you’re technically not dealing with money.

I could see this catching on extremely fast with the proper implementation, I think that plus the fact that the masses are still largely ignorant of crypto are the major barriers to what I’m talking about, not access to the fiat world.

It's me again @midlet

I just realized that I never actually thanked you for your comment. Big thx.

ps.
I would need to ask you for little favour. Recently I've decided to join small contest called "Community of the week" and I desribed our project.hope hive/community. Would you mind helping me out and RESTEEM this post - just to get some extra exposure? Your valuable comment would be also appreciated.

Link to my post: on steemit or on steempeak