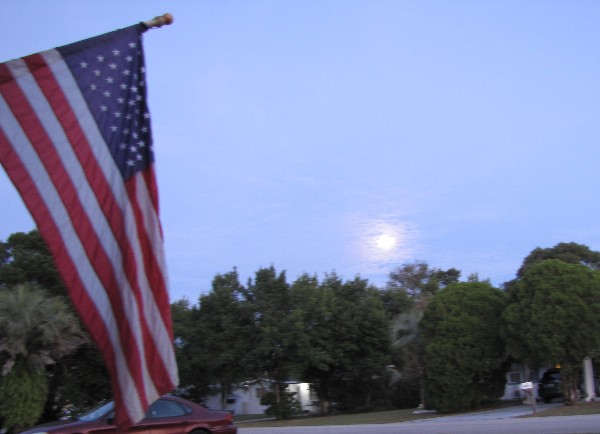 I cannot believe how stupid some people are. At an ICE facility in Aurora, Colorado, protesters literally took down the Colorado state flag and the United States flag and raised Mexico's flag in their stead.

I don't know about you, but when someone plants a flag, especially in another's territory, my interpretation is invasion, war and defeat thereof. The protesters at Aurora who willingly took part should have federal charges brought against them. Find them all and throw the book at them because this is bullshit.

I am sick and tired of the disrespect.

§7. Position and manner of display

e. The flag of the United States of America should be at the center and at the highest point of the group when a number of flags of States or localities or pennants of societies are grouped and displayed from staffs.

g. When flags of two or more nations are displayed, they are to be flown from separate staffs of the same height. The flags should be of approximately equal size. International usage forbids the display of the flag of one nation above that of another nation in time of peace.

This happened on American soil at a federal building

“Planting the flag” usually means making a claim to something, usually territory or land. Throughout history men have “planted the flag” claiming ownership in the name of the king, queen, country, church, etc. marking the land as their own.

I am a patriot. I am American.

An Army brat, my father was a U.S. Army veteran. My brother and my husband both served in the Air Force. I have two sons currently serving in the Marine Corps.

We honor and respect the flag. Period.

I am not easily offended but the protesters who participated in this act have offended me to my core. I am beyond angry and would go so far to call them traitors. They need to be rounded up and prosecuted. There must be consequences for their actions.

And if you don't think I understand the plight of immigrants, know this: My mother is a first generation immigrant. She gave birth to her four children, spent 7 years in country, learned to read, write and speak English, took the citizenship exam and pledged allegiance to her adopted country. She did it the right way. And guess what? While some of my Korean relatives came in legally, a few of them came in illegally and they were deported.

Blood relation or not, you do the right thing or suffer the consequences. No one, including myself is outraged by it. Why? Because I'm a law-abiding citizen. If I break the law, I have to be willing to do the time or pay the fines. They should not get special dispensation. And why should they? I don't like when people cut the line. Do you? Is that right or fair for those doing the right thing and waiting their turn?

I would also like to say that any politician currently holding office in the Senate or House found aiding and abetting illegal aliens, should immediately be held in contempt of court because those people do not represent me, or the safety and happiness of my country. They are dangerous and I fear the war for democracy and patriotism is upon us.

The U.S. isn't perfect but it is still the land of opportunity. If you're a patriot, be unapologetic and wave your flag proudly. Stupidity only has a loud voice because we remain silent. No More.

Well 50 years ago old Merle knew what was happening!

Whoa, I haven't heard this song in well over 15 years. LOL My father was a huge Merle Haggard fan and this sure did bring up some memories of dad singing along loud and proud.

When someone in Greece says such things openly and express their love towards their country, flag, language and nationality, they are accused of being fascists. I only say that being proud of your country, respecting its symbols and constitution, defending right from wrong is something all of us should learn to do. Everyone has the right to believe in whatever they want, everyone has the right to love their country, but everyone also has the obligation to respect the legislation and national symbols of the grounds they are walking on.

It seems lately that people who show any pride in their country are being called fascists and I have to wonder if they really know what it means? Might it be a case where ignorance breeds contempt?
I agree that everyone has the right to believe in what they want. I take offense when people try to force me to swallow their crazy pill because they think their beliefs are greater than mine.
I would never go to a friend's home, much less a different country, and disrespect their customs, beliefs or property.

Fuck your flag and fuck you. No support for terror-states that murder millions.

Aren't you precious. Have a lovely day.

I won't have a great day and neither will the millions of people in the middle east thanks to your stupid drone policy that you endorse.

Only you can determine your day. I hope it turns around for you.

Missed this one. Especially amidst current events and Internet's allure to pull people toward genetic loyalties. Understanding that the flag of United States of America does indeed represent a New World. Yes, we brought along many ills of the past, but today we remain a place for hope and second chances. And we must still fight to keep it alive.

BTW. The flag of a local H.S. was taken down and only flys during football games. Feels like European sentiment (after attending a couple of games).