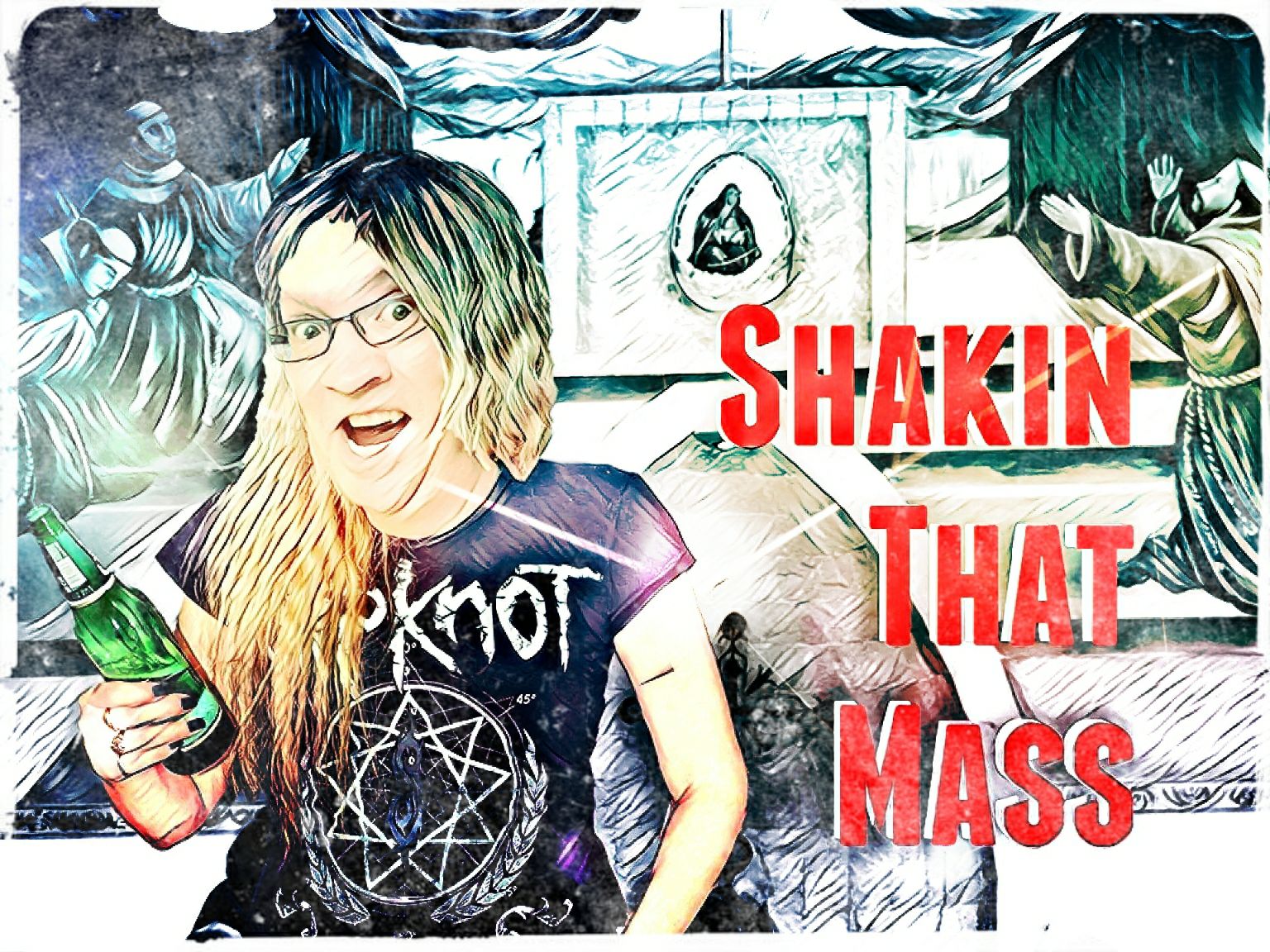 I jerked my head around and gave the Bear-Man the kind of look I give my old Window Cleaner when he asks to be let out of the basement and back to his family.

Just me and the big hairy bearded beast they call the Bear-Man.

He had been quiet too, at least till now. As I glared at him, he pulled himself out from behind his counter and did one of his funny little dances which made it look like he was skiing in slow motion whilst squeezing gerbils to death in his meaty fists.

He repeated, his lips gleaming redly as he leered at me evilly.

Oh god. Please don't sing the rest of it. For the love of all that is holy, please don't finish that line. Don't say that you see me shakin that ass?! I thought desperately.

The Bear-Man sang as if reading my thoughts.

I edged back and adopted the Sailing Monkey pose I had learned from my days at the Shan Temple.

The Bear-Man edged toward me, his dancing taking on a menacing turn as if he were wading through waist-high piles of shit songs.

I am NOT shaking my ass.

I said in a no-nonsense tone. It's best to nip this type of thing in the bud and fast or next thing you know someone ends up forked.

And not in a good way.

The Bear-Man straightened up and giggled before his face turned deadly serious.

He grimaced as if he were at the two girls house and they had given him coffee in a cup that didn't look very clean.

I dunno if it's fine to say that?

I said tentatively, ever wary of being hunted down and killed by hordes of angry internet people because I used words to describe colours.

The Bear-Man threw his head back and guffawed.

I was only fucking with ya. I ain't interested in black asses.

I felt a wave of relief wash over me despite my ass being quite a tighty whitey.

The Bear-Man was devilishly close to me now, having crept up unnoticed whilst we spoke. His face turned bleak and cold.

An odd silence hung in the air after this statement.

I don't know if that's any better than saying you liked black asses?

I said, stifling the urge to gulp as I noticed he was between me and the door.

Was this it? Was I to be sacrificed to some dark god in the back of his shop? Would there be candles and shit?

Hahaha!! Not even if it's this?

He stabbed a hand out to the shelf beside me and pulled a black and mean looking can down.

I took it and turned it in my hand.

I said, making a face as if lifting a cat and accidentally feeling one of its nipples.

It's got two types of coffee in it.

He answered, giving me a knowing nod.

Hmmph, fucking vegans. Alright then, I will give it a whirl.

Haha, will, when you put it that way you are absolutely right! It's got lots of coffee, surely a plus!!

Coffee almost always rawks in a stout. Here's hoping it is devilish and not a weak ass punk of a thing!

@tamaralovelace you have received 25 ENGAGE from @meesterboom!
View and trade the tokens on Steem Engine.

According to the Bible, Bro. Eli Soriano: The Marks and Proofs of a Blessed Reader

I clicked the two girls link and it made me gag my drink out. Now both my drink and cup is not looking clean to me. :-|

Yeah, that's a problem when you go down that rabbit hole!

At least it wasn't a link to the video itself, lol!

@zayedsakib you have received 20 ENGAGE from @meesterboom!
View and trade the tokens on Steem Engine.

You took me down a rabbit hole.

My mind ... "What ingredient in beer would not be vegan?"

Google's answer ... almost all beers are vegan, but there are some craft beers that use animal byproducts to clarify the beer. Commercial beers use industrial, vegan ways to do this ...

Hmm. I will be looking down there. I wondered too what would make it began but did have a memory from my wine fermenting days if using animal stuffs to clarify it.

@gikitiki you have received 30 ENGAGE from @meesterboom!
View and trade the tokens on Steem Engine.

A visit to BearMan is like a visit to Q... you know.. from the Bond movies. I got that feeling when reading this.., only he gives you the hottest beer and fuck the gadgets!

Oh man, if he had gadgets too it works be perfect. But in the meantime, crazy mad beers will do! :0)

Omg the master has done it again... cheers my friend and thank you for the daily dose of humor!

I am trying to imagine this sailing monkey pose maybe you can show me.. LOL... Have a good one..

Black asses and masses, me n Boom coming after you like after classes. Give me a moment, hold my beer and glasses!

I like a good ass, any color. You like slipknot bro? I love me some good metal music. Not too dark n heavy though.

I love metal. And a bit of rap actually. Ah, throw some beer into the mix and I am one happy dude!!!

@captainquack22 you have received 30 ENGAGE from @meesterboom!
View and trade the tokens on Steem Engine.

Thought all beer would be vegan anyway. Marketing crap again. If it says vegan on the can it will be a bad experience as it normally is. Have a good one and lets see just how bad.

I thought it was all vegan too. In a it's hardly comprised of meat kind of way. It does make me suspicious but I will give it the benefit of the doubt!

Vegan drinks... do they count eating yeast in beer as vegan or not vegan? And aren't most drinks vegans? I think milk and honey are probably one of the few drinks that aren't really vegan...

Yeast must somehow get a pass!! Although it lives but maybe they abide by theit must have eyes rule. Lol!!

The old "it must have eyes rule"... moles normally have skin above their eyes, I wonder if they are considered Vegan...

I do wonder if Vegan alchoolic drinks have a good level of demand, I just can't see people premium to buy Vegan beers instead of normal beers which are pretty much vegan already.

It's like anything, they stick s panel on it to match what's trendy. Marketing genius!

I would buy anything moley!

He does keep beers aside for me that he thinks I will like so I don't doubt it!!!

Ah, beer with coffee in it, a real conundrum of a viscous circle. "time to pass out, but too wired to get there". Yikes and yaarg, all in one fell beer swoop. Hope it was as good as your story about it. And I'd LOVE to meet this Bear fellow, as long as I get to stay by the front door of his establishment. I picture a very mondo guy with a lot of chest hair poking out of the top of his shirt that knows even more about the sudsy.
(I'm sure you described him early on, but my memory is certainly not as keen as it thinks it is...)

Your memory might be keener than you think! It was as good. I was quite the happy man :0)

but does it use blockchain and organic tribes to comb its hair ... ? and are we excited about it ... im not sure if that picture wants to make me smile or scare me hahah , grandma funk ?

Haha, the picture is designed to both excite and scare!!

I had a Blockchain beer once. Ridiculous how they shoed Blockchain into it. Needless to say I have never seen them again! :0)

another token :p ... hahah well, the problem with planet Crypton is that its somewhat of a wet dream for smalltime marketeers who play on the hapless yea ... that certainly gives a lot of bad name, also the big-timers like vitalsky , larrimer, that block.one guy and im well awere of the reputation they scribe to Justin Tron , ... Sun ...
on the other hand : i have no idea who "mister Bitcoin" would be (other than Satoshi Nakamoto himself) and i have also no idea who the great leader of litecoin is for that matter so somewhere on Crypton the concept of de-centralization hasn't been completely raped (like if you say here de-centralized it means 20 people deciding over everyone with literally NO control on where they get the votes from and also no expiry date on witness votes (i betcha fiver most of the votes they got they might still have from accounts that have LONG since quit ... a wave when it dropped under six, a ve when it went under five, a big wave when it went under $3 to $2 and then an aftershock after the hardfork-to-save-the-whale which left little postsers with barely anything of voteworth (by then steem already came from $7 dollar to $0.20 dollarcents

but ALL the votes cast from the start on ANY accoutn that didnt withdraw them before those people left this circus (i can say about 80 to 90 % of who i had in my voters - wrote myself some scripts - are stale, or gone but i dont know if their witness votes are so that would be like my dead grandma's last vote counting for the current government formation in hellgium here)

i have to admit i believed the frontpage

for about a week, then i ran into a pack of hyenas hiding behind steemcleaners ...

groupies more like , who enjoy the protection racket the cartel kept

and my illusion was over

but im not much of a quitter and mostly i had nothing better to do, then i found out about the technnical side and its really a piece of work, all that stuff keeps it interesting but the circus ?

fairy tales for the believers ... i know some pockets here and there 'micro-communities' if you like who were just as visible before as the current flip in the UI would make them now but its mostly what i call vote-suckers

people who would say anything or actually search for the best paid topics before they start writing ...

mostly heh ... a lot of people mistake the accounts young 'age' and starter-sp, they just assume you're new here ...

in your case you can't lie, you dont get 77 rep overnight lol

ive seen you around, its a really really small world if you look around a little but most people stick to their safe zone

I think the problem of the dead votes is a valid one. So many accounts still voting for witnesses but long gone from the scene. They really would counter it with vote decay and limit the workers votes but they never really saw it as a problem. Funny that, eh!

@doingdailies you have received 30 ENGAGE from @meesterboom!
View and trade the tokens on Steem Engine.

a small token of appreciation

Keep your eyes on the stars, and your feet on the ground.
Theodore Roosevelt

Congratulations @tyrnannoght, you successfuly trended the post shared by @meesterboom!
@meesterboom will receive 0.09030488 TRDO & @tyrnannoght will get 0.06020325 TRDO curation in 3 Days from Post Created Date!

lol..Bear-Man is a trip! I hit that link for the "two girls" to see what that was about. holy cow that's sick! lol.