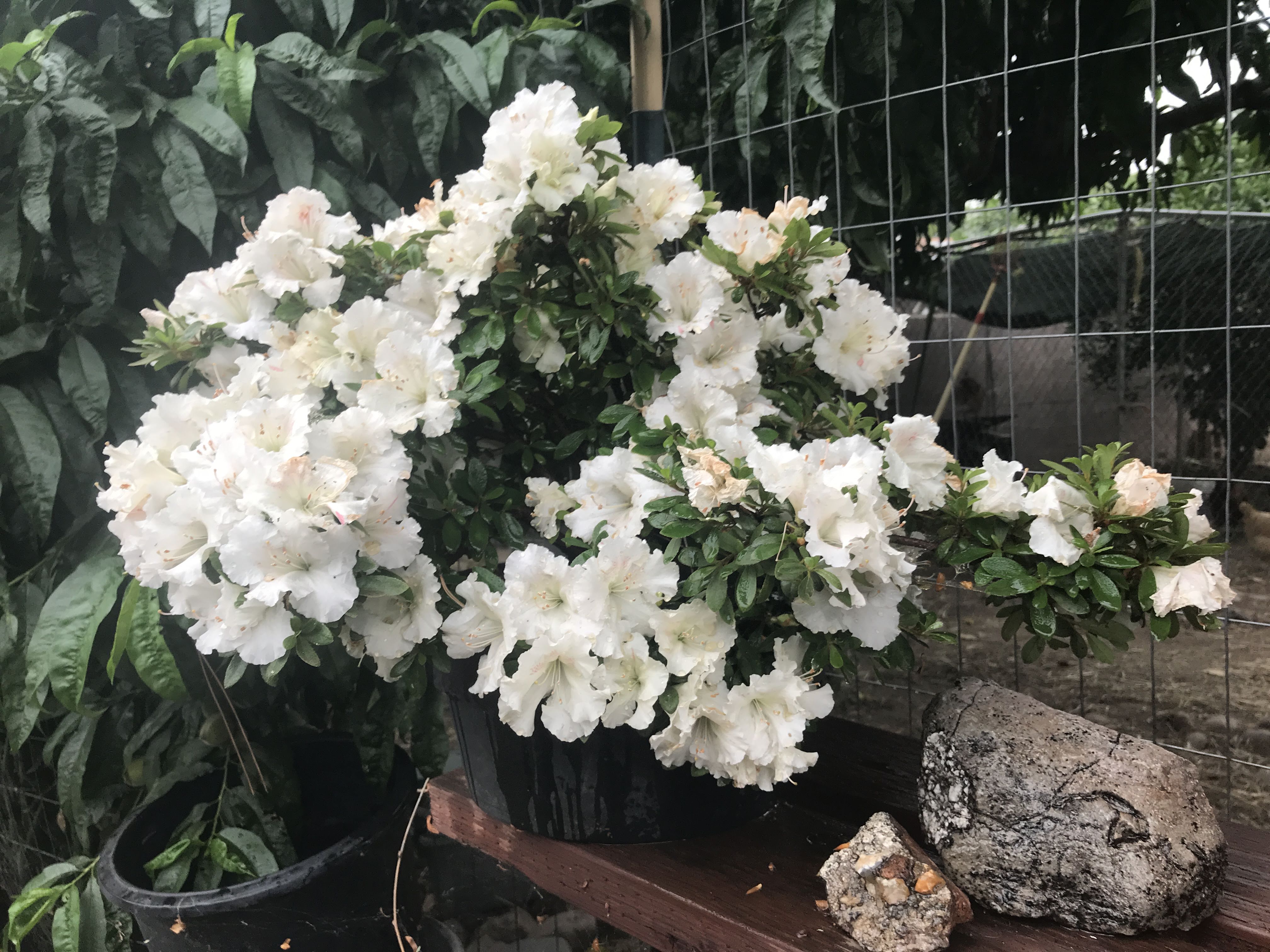 This is an update on a nursery plant I acquired last year (2018). This tree still has a LONG way to go, but I'm using this format to document its progression. I hope you enjoy :)

The image above is how the tree looked in late May 2019. It is probably just past its peak bloom. This cultivar is called "Gunrae" and it produces delicate white single blooms with just a touch of blush/pink spots on each flower:

This tree started as nursery stock in a 3 gallon(?) pot. it was quite bushy with almost all its foliage at the ends of long thin branches.

Its initial pruning took place in May 2018. it was pruned pretty heavily, but lots of extra branches were left so I would have some options when the next pruning came. The primary goal for this first pruning was to reduce the tree as far as I could, and encourage some back-budding. The tree was left in its 3 gallon nursery pot as I did not have a suitable pot available. Here is the tree after its initial pruning:

It definitely had more of a 'tree' shape, but it was still very 'lankey'. Not to fear, Azaleas are prolific back-budder's and after one growing season, it had plenty of foliage and had filled out quite well. Here it is in early March 2019, just coming out of winter dormancy:

About this time, I took the opportunity to re-pot into a slightly shallower clay pot, in proper bonsai soil. The pot is still very oversized, but that is OK. This tree is still early in its training and can use the extra room :) Getting the tree into some proper bonsai soil was essential. The nursery 'soil' was almost completely peat moss, and was almost completely gone. the pot was full of more roots than soil, and although the peat moss would soak up a lot of water, it would not hold it long. With the summer temps in my area often above 100f for over a week at a time, the pot would often completely dry out before I got home from work. The new soil contains a lot of high fired clay and is able to hold and slowly release moisture much better. Again the title image is from May 2018, just a couple months after the above image:

I wish I would have gotten a more 'artistic' image of the tree at this stage, but I'm happy to at least have one image of it in full bloom. If I was 100% focused on training this tree, I would not have let it bloom. The flowers take a lot of energy from the tree that could have been put towards growth, but I think its just too pretty and wanted to enjoy it.

By mid June, the flowers had peaked. There were still a few buds coming on, but the 'wall of flowers' was over, and I decided it was time to remove the remaining flowers and buds and prune the tree. Here is how it looked when i brough it inside:

This pruning will not be nearly as severe as its initial pruning in 2018. I started with the most basic: removing anthing growing straight down, or straight up, and thinning each junction to 2 branches. Azaleas typically sprout 5 branches from each node, so this pruning already removes a lot from the tree.

I then selectied removed a couple of the 'optional' branches I left last year. It still has far too many branches, and no clear 'Main' trunk (it has 2 central 'trunks, but I'm not happy with either of them), But it think its getting better. The foliage has moved in a bit from last year. I'm hoping for a backbud in just the right place on the center trunk to make a new leader and create some movement and taper. I'll cross my fingers and see how it goes this year :)

I still don't have any strong design ideas for this tree. As I have said, it is early in its training. Hopefully it will speak to me eventually...

#SoCalSteemit is building and supporting the Steemit community of Southern California. If you are from SoCal and are into creating quality content here on Steemit, we'd love for you to follow us @SoCalSteemit and join our group on Discord

Looking fantastic. You know what you are doing. Love the stocky pot you planted it in.

Keep as much growth around that trunk as possible. It's developing an amazing wide taper and nebari. It has the shape of a grand ancient oak tree with the many upward fan shaped branches. Keep as many primary branches attached to the trunk as possible. They are all spaced out enough to make the trunk visible and appealing.

I agree that it looks like an oak tree!

Thanks for the comments. I agree, the main reason it has so many branches right now is that I'm trying to develop the base if the trunk and nebari. The "Ancient Oak" is definitely calling to me in this one.