Imagine you have a stick... 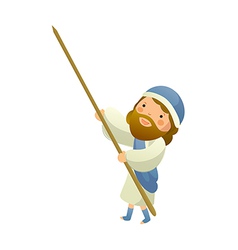 Imagine you have a stick, approximately your own length.
You are standing in an open clearing that has sunlight through out the day.
Put the stick in the ground, stand it up straight.

Congratulations, you have just made a calender. All you need to do now is program it.

Every day, when the sun is at its highest point of that day, place a pebble at the tip of the shadow cast by your stick. If you keep doing this every day you will end up with a pattern that is an imprint of the sun’s movement in the sky.

You may expect to see a straight line going up and down, but you will not. Instead, you will see an analemma (a figure-8 pattern).

As you may know, the earth spins on a tilted axis, around the sun. This causes all kinds of fluctuations (that I will not get into here), that are responsible for the perceived pattern 8 wobble in the sun’s daily highest position over time.

once you have laid down 365 pebbles, you’re calender is ready for use. From now on, simply track the shadow over the stones to know how far you are from mid-winter or midsummer.

Going Fancy, plotting the path of the sun

Ofcourse, once you have marked the high point of the sun every day, you could also sit there day after day and draw the actually path the shadow of the sun makes as it progresses through the day.

If you place a second stick a few feet away and start drawing the lines in the sand each day, you will end up with an image that looks most like a mountain.

No cartoon to illustrate this image this time, but a timelapse from a modern camera. Just keep in mind that you could get the same conceptual result if you used a stick in the sand and traced the line of the shadow each day.

Combining the Analemma and the solar graph

Essentially, the solar graph (the mountain) is the combination of each shadow cast by your stick througout the day. Or, you could say that it is all the analemma points together at each moment between sunrise and sunset.

The solar graph is the maximum space the sun moves in, it never gets outside of the mountain. Except when we are at the equator..

The same, but different

Now imagine yourself with your stick, but on a different spot more north or south than where you started. If you repeat the two excersises with the sticks, you will find that depending on your latitude, the analemma and the solar graph will have different shapes.

The graphs go from Russia in the north down the face of the planet to end with a look from Antarctica. In the north, the top loop of the analemma is the smallest, in the south top loop is the bigger of the two. Around the equator the solargraph looks like a gateway instead of a mountain.

Some conclusions about the suns's path

The analemma pattern exists to an observer
the path of the sun at its full power each day, at high noon, draws out an analemma over the year.

The analemma’s shaped depends on the lattitude
The sun’s analemma has a small loop up top in the nothern hemisphere. This is reversed for the lower hemispere.

The analemma can be stretched
Close to the equator, the shape is always higher up in the sky and is more horizontal. In certain cases the line of the analemma is seemingly broken and stretched across from east to west.

The solar graph draws pictures
In the north and south of the planet the solargraph look like a bell shaped curve. Around the equator the rising solargraph is high and may be stretched as to represent an archway drawn out by the suns path.

The point of this excercise is really to (try to) think like, or about, what you would observe of the world around you, if you did not have today's knowledge. Although it may be simple to explain how to make a stick calendar, someone one day may have used a simple technique like this for a first time to start charting the recurrance of the year. From a symbolism standpoint, the solar analemma is at least a very visual, and recurring, presentation of eternity.