Turning old doors into artworks; how the revival of a deserted village began - by @mariandavp 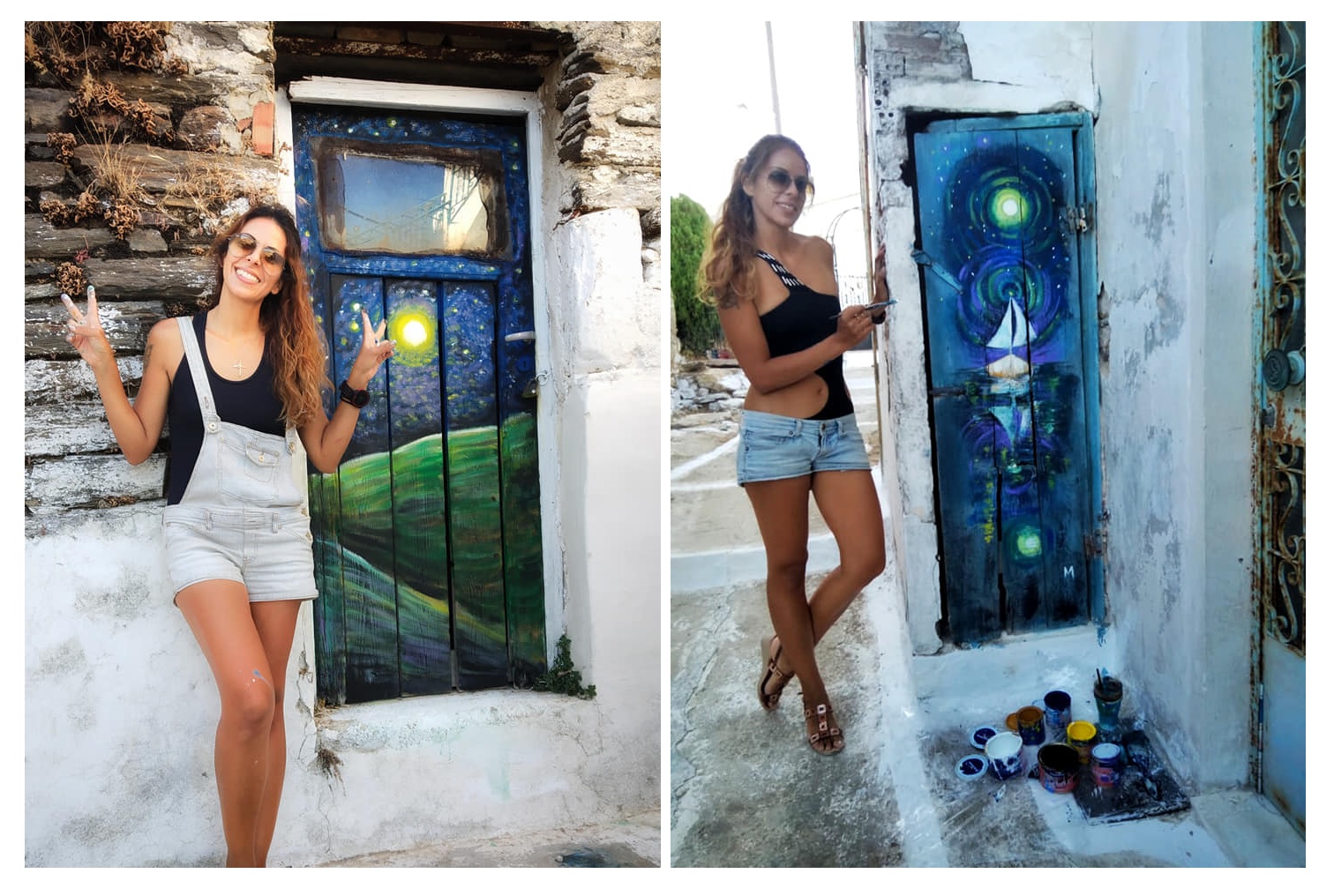 If lost causes had a face, it would be mine...

Seriously. I am a true generator of inspiring ideas that 99.9% of them turn out to be bad or entirely unrealistic. However, 0.01% of them will eventually prove brilliant and successful and will help me survive the day.
One of those very fulfilling not-so-lost causes came to me early this year...

The idea was to revive a completely deserted village in the northern part of Naxos island in Greece, called Skado, by organizing a festival and turning the whole village into a gallery.

I approached the Skado-Mesi Club and members of the municipality of Naxos and Small Cyclades and explained to them how we could exhibit painting and photography on the walls of semi-destroyed old buildings and in parallel organize other festivities, including athletic events to create a vibe in the region. Apart from the publicity, the immediate effect on the region would be a rise in the extremely low real estate values. We would be making something out of nothing, which in fact is my thing.

Although not very optimistic on my envisaged effects on the region, both the club and the mayor received the idea well and allowed me to proceed with it. In due course they became more involved but the beginning was sure a hard one and all on me.

When I arrived to the village from Athens I had to deal with multiple shocks. The people that had arrived before me, were old and useless when it comes to giving a hand, and in fact they didn't even know what the word festival meant so they were quite closed and distrusting towards me.

What could I do, to win them over? To get them to paint their houses and clean their yards? To believe that this could actually be the beginning of something?

One idea would be to pay them off to cooperate, another to threaten them. Unfortunately I am not rich or dangerous like that, so I had to find another solution. I took a walk around and saw all these beautiful old houses right to become a pile of rocks and it came to me... I would seduce the owners into my art project by giving them a small gift.

So, it started. Every day right after the beach we 'd drive up to 30km (well actually my mother @sofimanola was doing all the driving, since it was her parents village) to the mountains, and I would paint the old wooden doors of those old buildings... only I would turn them into artworks.

Soon, tourists would feature them on their social media pages, and then some online papers would post about them and the village would become known enough to be able to host one of the most successful festivals in Greece featured on the news and broadcasted through multiple national networks.

Yes, it was that successful! And I am going to prove it to you in my future posts. Today, I'll just show you my old door project. Maybe it will inspire you to diy :)

Love to see you back on STEEM 😋
Sounds like a really cool project, Art is definitely a great way to revive a deserted village

Well, I have to have something interesting to say in order to make a post. But surely you gave me that push I needed :)

This post is manually curated by @dblog.supporter.
Visit https://dblog.io now! This is a tribe for all bloggers on Steem blockchain.

Wow! This is awesome. I like when I see people find creative ways to help those around them. You're doing a brilliant job. Looking forward to seeing more of this on your blog.

Thanks so much for your kind words!

Thanks! Good to find you here!

Please Check Out What I Saw in Switzerland!

The Old Dog Asks: Did One Artist Really Beautify an Entire Town?

Thanks, it's really good to be back :)

Very well, you have introduced the old things in a very new way, which is very fascinating, it looks very beautiful and new to look very good.

Thank you very much, glad you enjoyed the result!

Wonderful initiative! How many doors have been painted?

Thanks, 4 doors and quite a few windows.

pure street art!! I love it

Beautiful as always!
Welcome back dear

@mariandavp You have received a 100% upvote from @botreporter because this post did not use any bidbots and you have not used bidbots in the last 30 days!