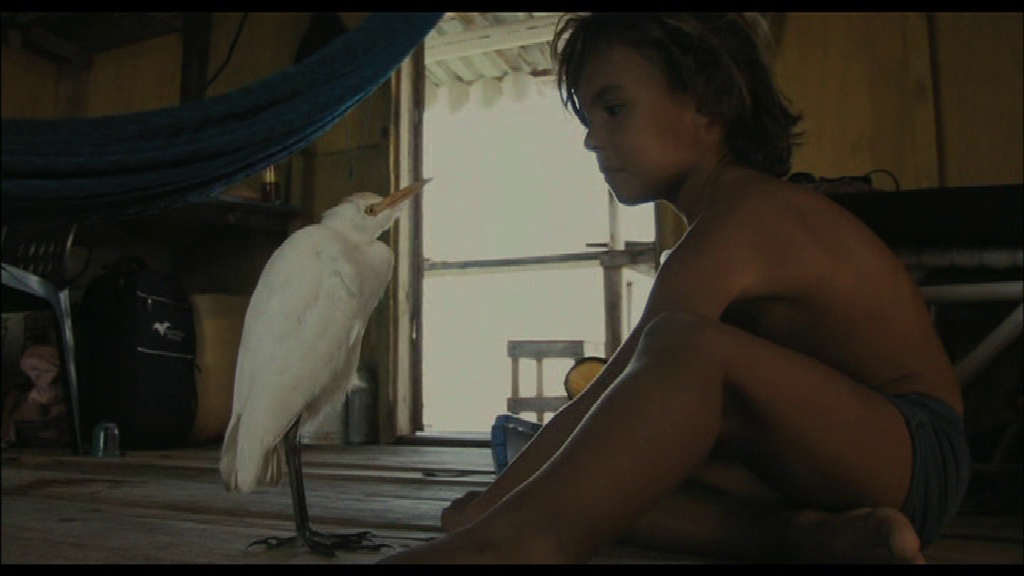 There is always an agenda. The task at hand, is only to figure out what it is. Nobody, even the most unplanned or documentarian director´s, make a movie just for the sake of movie making. In fact it is impossible to not choose a cinematography, I would argue, so that the final product is completely free of agenda´s or prejudice´s. It is foundationally baked in the cake in the first place. Art is a way of expressing your thoughts, without being explicit.

I start out with this "lecture", since the movie To The Sea, is a good example of this points. On the surface level it looks like a safe and straight forward, good tale of a father and son building a relation through living in and with nature. But deeper down it actually covers up and implicitly moralizes, without explicitly explaining what grounds it has to moralize.

It uses our built in sensibility to want a simple and carefree life, away from the workaholic, taxpayer hell most of us is trapped in but which at the same time enables the possibility of creating a movie like this. Nobody created a movie using a seashell or a dead lobster. It comes from a highly sophisticated, industrialized "capitalist" system.

But that is a minor additional point. The moral tale is more important to me. Don´t get me wrong, the film is deliciously fresh and natural not only in its scenery but also in its unobtrusive curiosity about how nature just creates scenery without humans having to control it all the time.

A central theme here is control. The mother in Italy is annoyingly controlling. Do this, remember that, go here, go there. While at the same time the father in Mexico (Banco Chinchorro coral reef) is like ... "yeah go and get your hair wet in the ocean, just look out for the crocodile". No control, just guidance and trust in the child´s own abilities.

This dichotomy is not analyzed further, as when the kid gets back to "civilization" he is again, without any judgement, placed in the boring, programmed welfare state life of the mother. This is an implicit moral justification for the mother, obviously thinking that a Mexican Mowgli was a good and solid choice for a father while she is a completely urbanized and welfarized mother, but eventually ending up (planned) destroying her family after all.

It is clearly that the boy is handed over to the father from the mother as she is the starting and endpoint of the story. It would have loved that the kid started out in Mexico and explicitly stated that he wanted to stay and the father would then fight against a violent system, trying to steel his child away from him, even if there is a “mother” (a contradiction in terms I would say, when she has destroyed her own family) at the other end.

Now that would have been a serious moral tale... but no, we have to turn our focus towards the birds and the fishes, because their environment must be saved. They suffer and must be taken care off, not the child, He must obey the system. He does not count as much as a goofy ibis bird.

Taken from an interview with the director :

"For example, when they go look for the bird, I had the idea of this tower going all the way into the sky as well. They are unable to find her because it’s the own destiny of the bird to continue with her voyage. And then the last time Natan shouts the name of the bird, this panoramic point-of-view from the top, just watching the sea and the mangrove by itself, and feeling also the absence of the element of the bird, without actually saying it or pushing this idea that they are not finding Blanquita. To make the images more lyrical" (thanks to H2N http://www.hammertonail.com/interviews/a-conversation-with-pedro-gonzalez-rubio-alamar/)

Just try and exchange the bird with the child. Why should it be anything worse for a human child than a stupid bird. Let the child fly and do what it wants. Oh no, we cannot do that. Oh no... the child must cry when "forced" to leave its father, because mother have used a violent state intervention to control the behavior of the father and the child. The child must obey, because … civilization. But it is wrong to interfere with the birds you see…. the birds ...

What really pissed me off, was seeing an "ad" for the coral reef in the final text. Is this really what it is all about? Virtue signalling using a kid who has his family destroyed by a corrupt mother, while he must learn how important it is to not disturb layers of chalk and goofy birds? The child is considered worthless, or at least worthless than chalky layers on the seabed. I am quite disgusted by this. But it is oh so symptomatic of how the consciences state of human beings in the west has been completely lost.

I do not like it when I feel manipulated and this movie tries to do that, as I have pointed out above. From a neutral point of view, it is a fresh and carefree short little movie that no one can have anything against. And that is completely the point, since the real important aspects hinted at in the story, is not dealt with but rather glossed over, to serve political correctness. I really dislike that.

The idea that something is natural and something is not is actually quite strange when you think of it. It is an old religious thought that probably is older than the good and evil dichotomy, but it is still well and alive. This film seems like a perfect example, even though throwing homosexuals from buildings also come to mind.

You have a very good point there. I agree that historically, a difference have been cast between what has been created or changed by humans tend to have lower value than the idea of the "pristine" nature and subordinating yourself to it. It could be the belief that humans are basically evil, or that judging people as evil, will get the judge access to those goodies. It is certainly a obvious underlying theme here as in all those kinds of movies