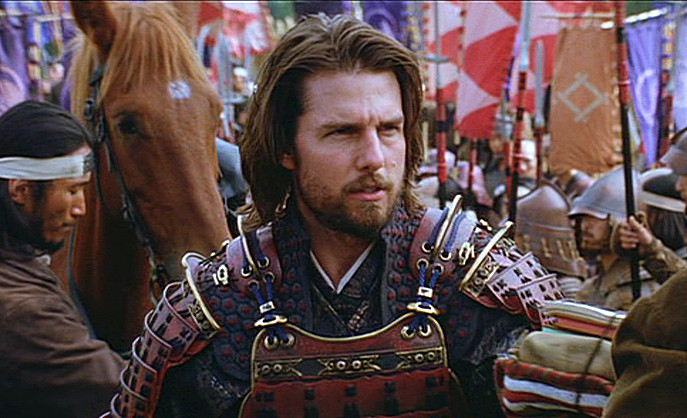 I like me a decent action drama now and then. And despite Tom Cruise being a second rate actor, what he does do well, he does as well as anybody. One of my favourite action thrillers is "Edge Of Tomorrow", a movie that fit Cruise like a glove. It fits because the man has no emotional depth in his acting ... at all and that is exactly what is needed in that movie.

The problem arises when he is cast in action-drama roles, that demands a fair amount of emotional depth to be believable and engaging, and this is nowhere better exposed than in "The Last Samurai". Cruise is one of the "hunk" actors, a dozen or so male Hollywood stars, who are primarily cast because of their looks. I don´t mind good looking men in movies, but they should be good emotional/character actors, and that is almost exclusively, never the case. The only one I can think of, on the fly, who is both a "hunk" and a decent actor, is Marlon Brando.

A civil war veteran, Nathan Algren (played by Cruise), turned roadshow attraction, with post traumatic disorder, is hired by an influential Japanese industrial magnate, who is entangled with the political system and the emperor. Algren is supposed to help organise the troops gathered to go against the growing hostility from the ancient Samurai order.

Algren ends up in capture of the samurai and as he gets used to his "open prison", he discovers how this "foreign" lifestyle and "morality", is much better than the semi-fascistic, power structure, he has been working for previously, is. He turns to support this new "family" of his and trains as a samurai, sort of,. he is then included in the opposing force which goes against the new military regime.

Rarely is the plot structure the determining factor of the success of a movie. It is the story that makes or brakes it and in this case, there is as much story as there is dog in dog food. Sometimes the epic nature of the plot gives it a bit of wings, which Lawrence of Arabia could serve as a prime example of. But even that is missing here, which adds another dose of salt to the wound.

I am not expert in the historical background of the samurai and japan, but as far as I understand this movie has practically no ground in correct historical facts at all, so that aspect is gone also. What I am left with is a hollow and empty excuse for making a second (or third) rate action-drama, that only barely succeeds in imitating every cliché in the book.

What the movie actually does very well is exposing Tom Cruise´s lack of skills in portraying a character. All he can do is try as hard as he can to stare intensely, with or without wet eyes. There is no variation, no emotional dimension or scope to his expression. It is like watching a repeated still photo of him over and over.

The lines are all so derivative and predictable it is close to insulting the viewer. The battle scenes are amateurishly made and looks like something of an old Errol Flynn movie. The big battles at least, some of the one on one´s are decently choreographed.

All in all I feel no connection to the plot, no connection with Algren or his semi-love story with the "single mother" (that he created) or her children (who´s father he killed), or the "glorious" samurais or their culture. It is like believing you get the giant big mac on the tv screen above the counter - when in fact all you got was a flat, protein- and vitamin starved, dry bun with a tasteless burger beef in it.

This is one to avoid at all costs, if you have even the slightest sense of quality. I can only wonder about those people I have encountered during the years, who consider this one of their all time favourites. It says more about them than it does about he movie. One has to be emotionally corrupted or lacking basic understanding of what makes a decent movie to rate this one high.

I agree. That was 2 1/2 hours of my life I will not get back. Oddly, all of my friends rated it very high.

Well, you are probably the mature one among them .-)