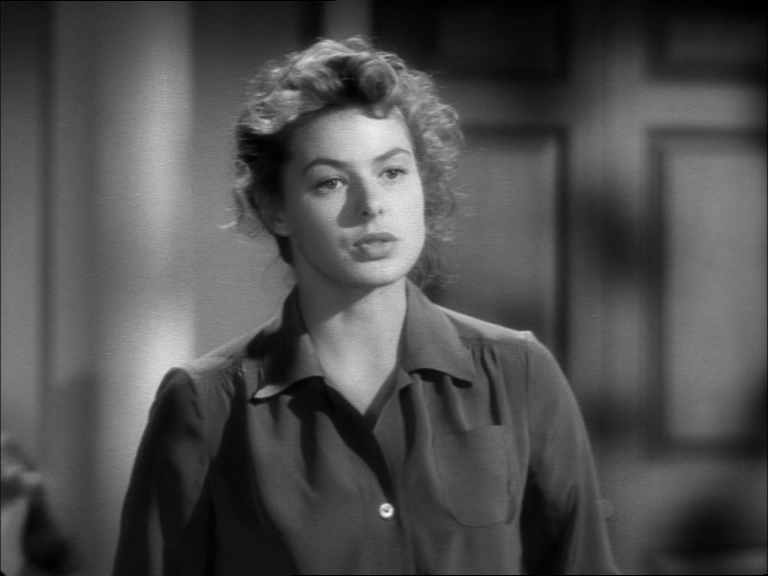 From the enormous output of the old master, Spellbound is one, that have been sidetracked over the years, for reasons I can understand. But it is quite unique in one way, which makes it an interesting watch. Mostly from a cinephile view and not so much for the overall storytelling and plot, even if it has a good share of Hitch´s trademark sexual undercurrents.

Hitchcock rarely collaborated with other artists in his movies, but Spellbound is a notable exception. The story of the male protagonist solely rests on his psychological barrier to come to terms with something dreadful that happened in his childhood. For the passage in the film, when this is dug out of his mind, Salvador Dali had been called upon, to create a surrealist, dreamlike series of images that could fit with the narrative.

What strikes me about it is how much artistic skill it expresses in these kinds of scenes compared to the otherwise quite bland "ordinary" imagery and dialogue it is connected with in the rest of the runtime. And how well the visual "worlds" of both these giants of art, fit together. They both have their roots in the expressionist/dada/surrealist ideals of the first decades of the 20th century and it clearly shows it is a great fit.

The deliciously, naturally beautiful Ingrid Bergman (probably my personal favorite Hollywood sex symbol), plays the role of Dr. Petersen (maybe the scandinavian surname was chosen to justify the actress´ swedish origins), a calm and collected psychiatrist who eventually falls in love with her new boss, the handsome Edwardes, played by Gregory Peck. The title of the movie works in two ways. She is bound by a spell of love and lust for Edwardes, while he is bound by his mental spell that won´t let him go and be himself.

The sexual Jeckyl and Hyde undertones are clear from start. Dr. Petersen treats a woman who is obviously nymphomaniacal in her behavior and she looks down at her sexfixated patient, through her glasses (an obvoius symbol of duality) as if she is looking at her own bodily desires and rejecting them by constructing a cold and "professional" appearance.

It is also noteworthy to point out the trademark use of stripe shadows by Hitchcock. both because it is a theme that triggers Edwardes psychological problem, but also a symbol of a prison, both literally as is shown with the cops hit by stripes in one shot and Dr. Petersen fealing locked in a prison of chastity in her bed, when she longs for another "embrace" with Edwardes, in another. This trick goes way back to Hitch´s earliest silents and german expressionism.

Another typical Hitch scene is when the pair "engage" the second time, in the library, doors open along a corridor while their kissing is superimposed into it. The symbolism should be quite clear. Some psychological chains are being broken and new possibilities open up for both of them, to let each other into their life, based on love, but also their respective psychological barriers, maybe be torn down from this union.

The Salvador Dali passage is worth the whole movie alone in my opinion, even if it is just a few minutes long. I will not spoil the fun for you by analyzing it in any depths, which I may not be able to do well anyway. I am very impressed at how well it is constructed considering the technology at the time. I wish I had a 4K remastered UHD of the sequence, as it is jawdroppingly good and mesmerizing. It really nails most of the rest of the movie to the wall from a purely artistic point of view. And this is the movie´s biggest problem. The mediocre main part of it, does not match the rest, that is high cinematic artistry.

It is a returning problem with Hitchcock´s movies. He knows when he needs to be very precise and take complete control and be absolutely, maniacally in control of the expression. And then he just let the major meat of the storytelling drag on in an average middle of the road, predictable manner, losing control of an actor or let dialogue tell the story rather than the images. The greatest of his movies, in my opinion, Vertigo, avoids this completely by letting every single scene have its own unique addition to the full story while still hanging together in an overall underlying feel.

My biggest complain with this movie though, is Gregory Peck. Holy mother, is he emotionally absent from this role. I know that the plot needs him to be a bit in that direction, but he really is stiff and uninspired. He looks like he has no clue what Hitchcock is tryin to pull off. Bergman is doing her best to compensate, with her impressive and suttle little expressions and moves, but is mostly encumbered by Peck´s almost lifeless Edwardes. Peck was clearly chosen because he was a good looking hunk, and not because of his acting skills (a recurring problem in Hollywood). Bergman being a giant exsception to this rule.

Lastly. Note the scene where Peck bends his head back and to the side while listening to the old psychiatrist. How much that resembles a similar shot of Perkins in Psycho 15 years later. Also note the nudge at "The Great Train Robbery" from 1903, in the last frames :-)

I can still recommend it for the Hitchcock fan and the general cinephile. The average movie fan... not so much