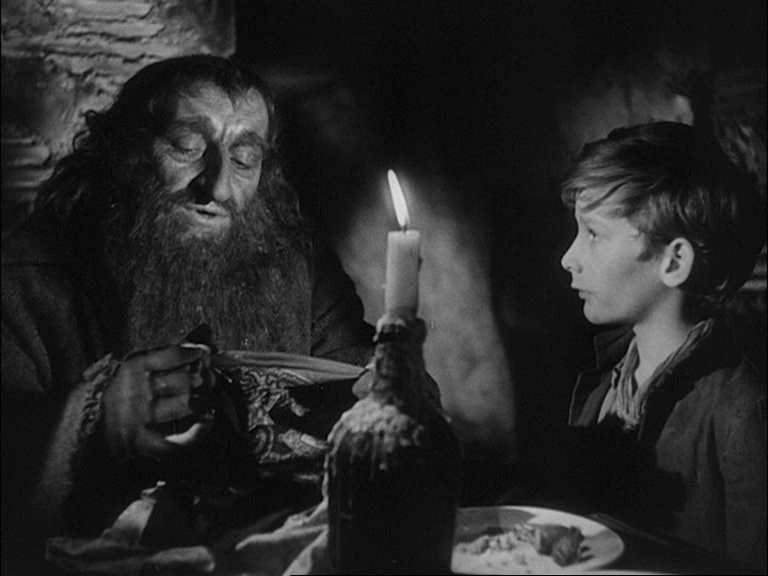 Straight from the momentum of the success of the other Dickens adaptation Great Expectations in 1946, comes Oliver Twist in 1948. I don't know if it was a plan to make it originally or it was a kind of spin off from the previous success, but apparently the film team that gave us Great Expectations, carried straight on with this one.

This is probably the most famous of all the Dickens stories and I would presume that pretty much everyone in the western world has heard of it even if they have neither read it or seen any adaptation. It is the quintessential Dickensian tale, with a young protagonist who has to endure much hardship, before his true nature can come forth. I would suggest that one watches both of these two Lean adaptations in a row, if not necessarily in order of issue, as they seem like a twin movie as the cinematography is very alike.

From the first moments we get the idea that Oliver may be of more noble lineage, than his placement in a orphanage. When he looses a bet, which means he has to ask for another portion of soup, he is practically given away to work for an undertaker and his dysfunctional household. As is Dickens custom, the personalities are lightly caricatured and strongly divided in softly good and sadistically evil.

After a row with another servant about the origins of his mother, he runs away and heads to the big city of London. We are in the first years of the 19th century and just as in Great Expectations, London has the fabled dark, dreary and smoggy ambivalent expression. The ideal of a fantastic old city full of possibilities but also a thief or drunken poverty stricken personality.

But he has barely arrived before he is lured by the Artful Dodger into Fagin´s motley crew of young thieves, living high up in an attic like room across a bridge overlooking the rooftops of the vast city. Fagin, played very memorably by Alec Guiness, is a slightly stereotypical "jewish" looking thiefking. In fact, on the heals of the Second World War and the holocaust, this was noted by both the american and German audiences at the time.

But luck strikes for Oliver after a failed attempt at robbing an elderly gentleman, and the young man is accused of doing the deed. The gentleman takes care of Oliver, but the gang of thieves are not quite satisfied with the situation as the young boy may talk and expose their hiding place.

Keeping things together for Fagin is not easy. He has to pay a policeman to cover for him, he has two associates, Sykes and his prostitute girlfriend, and former "employee" who needs to have their share of the pie to keep things going. The lot of them sets things in motion to figure out how to get a hold of Oliver and start to work back in his history.

Bad luck strikes again for Oliver as he bumps into Sykes and Nancy, who snags him of the street and bring him back to Fagin´s gang. But Nancy regrets catching Oliver and wants to make right. Things take a turn for the worse and several of the central figures must die before all is "solved".

Personally I do not have the same affinity to this story compared to that of Great Expectations. Twist was an early work and bares the signs of that, while Expectations is much more mature and have deeper aspects and more layers. But Twist do lends itself more easily to work with cinematographically, and, just as Expectations, it almost overflows from one lush expressive scene to another.

The actors are all decently good, even the boy playing twist, if a tad lacking in expressiveness. But certainly the work by Guiness as Fagin and Newton as Sykes, is great. They put everything into creating truly memorable Dickensian figures like those most people would know. Even the dog plays its part well.

It is clear that the momentum from Expectations is carried over to this one, and it is even more stringent and well paced. The story is just slightly less catchy for me so as an overall judgment I get to the same verdict in the end. These two movies are very dear to me and I clearly remember seeing them on the television as a child (back when black and white movies was common on the telly) and they really grabbed me and are partly responsible for me becoming a movie buff. It is a highly recommendable movie.

Ok, I'm going to have to admit that I loved reading this great post!

Thank you, glad to inspire

1000 points for this solid review of one of the films based on the literary work Oliver Twist. It has been a great pleasure to have read