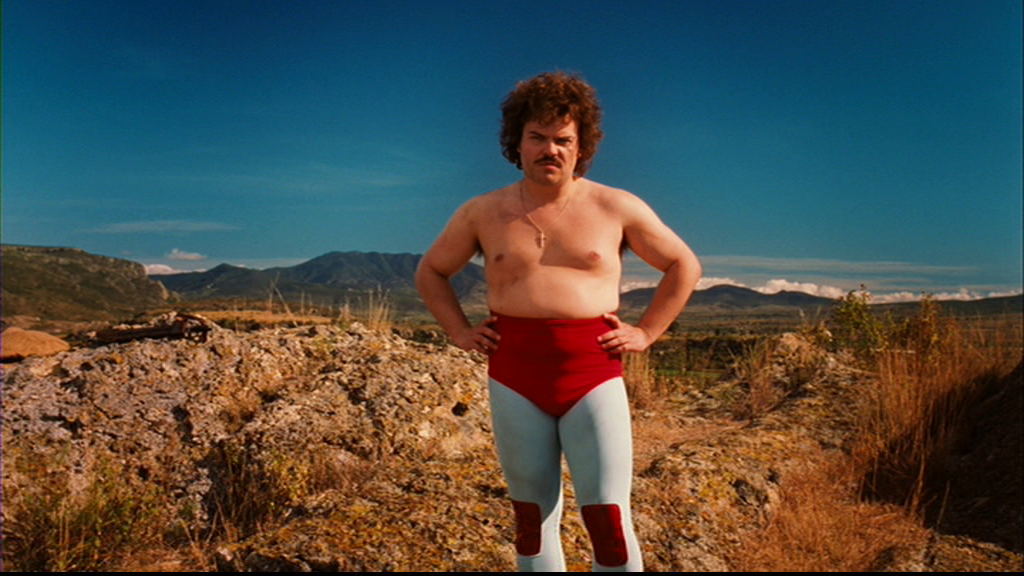 This is Jared Hess´"follow up" movie to Napoleon Dynamite and it shows. It is, if not a remake, at least a movie that uses the same type of "loser" characters, puts them in a weird and to some extend unrealistic world. The cinematography is not quite as stylized, but it certainly has the same basic expression. The central character is not quite as looser like, but instead more like a parody of a lot of different kinds of "losers".

It is supposedly loosely based on a real life story, of a similar munk spending 23 years in wrestling to support his institution. But that does not make the story presented here less crazy.

It is a ridiculous and black humour inspired tale (notice the reference to Monty Python´s holy grail in the “hand in the frame” scenes) of a munk in a Mexican orphanage, who dreams of becoming a hooded mask luchador wrestler. His daily chores extends to creating something eatable for the unfortunate inhabitants of this orphanage and how he one day recognizes, that this may not be all that could be to his life.

When a hot new nun arrives, his desires awaken and his ambition to show something apart from upgrading his extremely disgusting dishes to fresh salads, is channelled into actually act on his wrestling ambitions.

We follow nacho and his trusty companion in the pursuit of money, glory and acceptance of the nun and the children of the orphanage, who slowly realize that there could be more than meets the eye with this weird munk. Nacho goes through more than a few beatings to finally arrive at the final confrontation with the "final boss"

Only when he sees his loves desire and all the kids with nacho like hooded masks come to support his fight, he gets his powers together and can literally fly as he finally beats the fleeing opponent.

Now I am not spoiling too much of the plot here, as it is all quite predictable and settles very close to tried and tested vehicles for telling stories and creating slapstick gags. I find that it suffers from the same problem with Napoleon Dynamite. The situation takes a lot of time to create a "believable" and engaging environment and set of characters. But then most of the movie has gone by and to wrap things up, everything has to be resolved too quickly in the end.

It is as if the director is more concerned with the gags and the specific scenes than creating a memorable whole. This is not to say that what you get is second rate. The part of Nacho is really tailored to a funny actor like jack Black, who does not have any problem presenting himself in a less than optimal pose or situation.

The cinematography is carried over stylistically from Napoleon Dynamite, but with a nudge less stiffness, so that it gels better with the fairly large number of "action" scenes in the wrestling arena. Hess uses a lot of "still leben" scenes, but this cannot work in a wrestling ring so it must be softened out a bit to make it come together.

Now for the gags, they are fine, if not overly imaginative but rather predictable. It is good fun and this movie as such, is a good one to watch with your kids if they are pre teen or early teens. It is good fun overall with a few very funny scenes, but not too hard follow plot or story line.

it is a kind of movie that you can watch without spending too much time thinking about it, but it still has a good deal to offer in both a nice cinematography and a few good laughs. I recommend this movie.