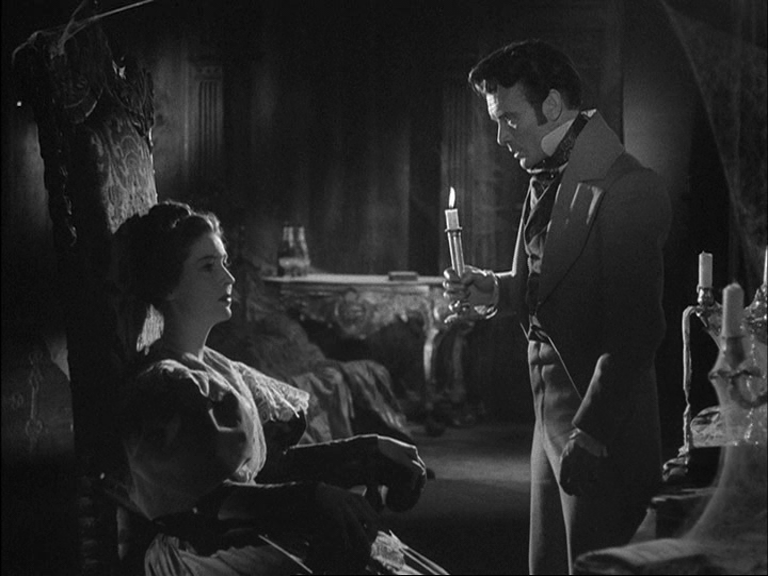 There are two major periods in David Lean´s career. The best known one is in the late 50´s and 60´s with films like Lawrence of Arabia and Dr. Zhivago. But a slightly lesser known streak of high quality movies appeared right after the end of the Second World War.

The success of Brief Encounter from 1945, probably made Lean the choice director for an adaptation of Dickens classic novel, Great Expectations and he didn't disappoint. The creative team behind this, would basically stay together for the next big outing after that, Oliver Twist. But even if you would consider Twist the best of the two Dickens adaptations, there is no doubt that the German expressionist feel, that was already apparent in Brief Encounter, was becoming a central tool for Lean and possibly the most memorable aspect of this movie (and its predecessor possibly).

At its core it is a coming of age drama, with an undercurrent of social and cultural critique of the victorian era, with themes of humiliation, ambition, fear and impossible love. And underneath there are layers of abuse, crime, and secret desires coated with said culture.

Pip (older version played by John Mills), a young boy living with his sister and her blacksmith husband, gets a sniff of the underworld when he encounters an escaped convict, while visiting his parents graves in the nearby graveyard. Pip feeds him at helps him get off his chains. Later he is brought along when the aforementioned convict is apprehended by the law and he is uncertain if he undertands that it is not of Pips accord that he is caught.

Miss Havisham, a strange lady living alone in an old house, pays him to come and visit and play with hher adopted "daughter" Estella, who is being raised to "break men's hearts, as Havisham herself was left on her wedding day. She stillwears her wedding dress and the table is set for a wedding dinner, all covered in dust and ccobwebs. But while Pip is treated badly by Estella, he still falls helplessly in youthful love with her.

Yearspass and Pip, now a grown young man, is suddenly summoned by a lawyer, who represents a secret benefactor. He will be paid a monthly allowance but must be educated as a high society gentleman. Pip suspects that it might be Mrs. Havisham whop has plans for him even if Estella has been sent to France to become a lady and is swarmed by interested men.

But things are not quite as Pip thinks and he needs to grow into a man who has more understanding of the world and can see through the chains of society. He needs to remove it all from his love to open her eyes and see the real and true world outside those constraints to be herself. But it is all really based on Estella becoming somewhat of a Mrs. Havisham and only then kindly let Pip have her as a wife. It is actually well known that Dickens originally had a different and more "depressing" ending. I think that I would have liked that one instead, since this "happy ending" doesn't really seem to fit well with the overall dark and violent themes going through it all.

But to the most important. The cinematography. This is simply a glorious movie and the compositions and the movements are so well planned and acted out while still leaving space to be very creative. Check out how lean uses ambient noises to represent yelling by Pips sister. But everywhhere thee aare uses of shadows, dee contrasts between light and ddark and a discrete hint at horror elements, most notably at Satis House of Miss Havisham but also by the use of trees and branches resembling creatures. Good use o cclose ups of face for expressive mooments exactly when they are needed. These re the times of great epic movies and Great Expectations is right up there with the best, at least as an example of superb cinematography that most other director could only dream of achieving. It is a glorious expressionist-gothic victorian mix that is very unique.

The actors are carefully chosen for the way they look. This is in good alignment with how a reader of Dickens, mind will have the characters look and Lean is careful not to destroy those expectations. One of my favourite scenes are the one where Pip opens the door and the convict stand outside creating a huge and frightening silhouette. This can be traced back to early cinema, like "The Lodger" by Hitchcock or later in "Amadeus". Just fantastically evocative images.

Overall the story feelss shortened though and focuses ore on making sure that most parts of the plot is served (he does not go to Egypt though) and the story suffers a bit from that. I know this is a great problem with these kinds of adaptations, but I think it would have served it well to make it a "whole evening" movie like "Gone With Thee Wind". The music can at times feel a bit too intrusive and presumptuous, though it is much to do with the style of the times. I do fel that Lean has slight problems with pacing here and there, but it may primarily come down to the ability to fit everything people expect to see, into a standardd length movie.

It is also a study of these times of British cinema, post Hitchcock and post world war 2. There always seems to be a surge in creativity after a great conflict, like with weimar cinema. English cinema had it after the Second World War and Lean is the greatest exponent of this trend. His weakness may be his utmost care with the cinematography, leaving a few things wanted in the acting department. That is not to say he is sloppy, but it can be close to becoming a visual vehicle more than a moving picture one at that.

This must come highly recommended, and only the small detractions I have mentioned here leaves it short of a status of a masterpiece. But do not hesitate on getting a copy of this one. If you are into epic story telling and superb cinematography, you are in good hands with Great Expecctations. Lean manages to cover all bases and yet maintain the original spirit of Dickens masterpiece.

Wow its a so nice history

The title of this movie says it all and it all comes true with a great story.