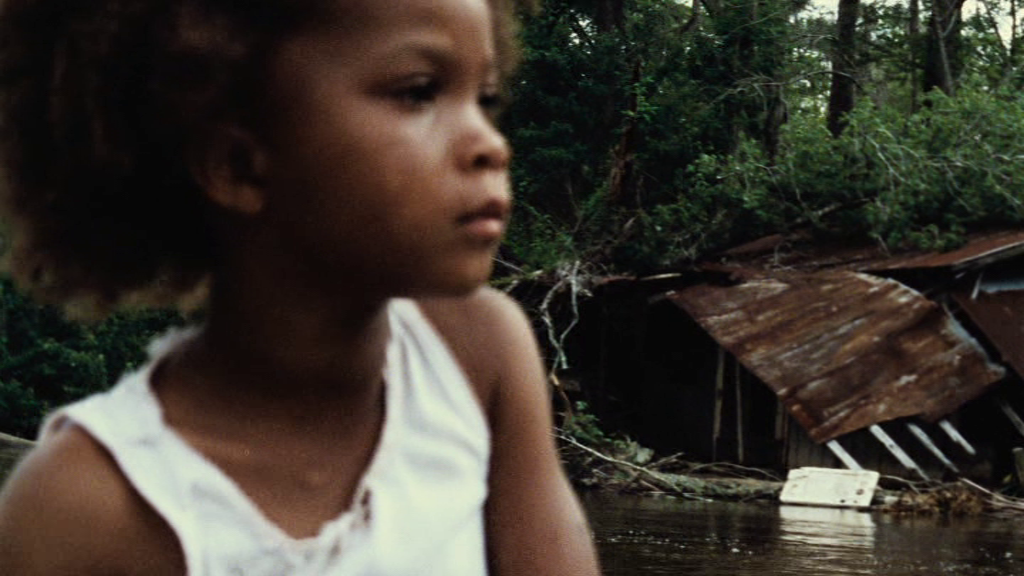 I went into this movie with the notion that it would be a fantastic movie. To my knowledge it had received praise across the board and even and old colleague of mine, raved about it. Now, when children are used as the main character in a movie I always wear my sceptical goggles, as they are not as sensitive to how their character is portrayed or possibly being used to present a subtext of political correctness.

The director is making his debut here and being born in 1982, we are entering into "millennial" mentality and for this aspect alone, it has its interest from a cinematic, evolutional angle. How does the young generation see the social- and gender dynamics and how do they express human emotion. I am convinced that how the director understands these aspects, consciously or unconsciously, will show in a movie, as it is an internal reference.

Hushpuppy is a young girl living with her father in the southern swamps of New Orleans (?) in an area called "The Bathtub". This is like an enclave of people who wants to be left alone and do not ask for help from the "outside" (beyond the Levee, where the welfare state is!). They pride themselves in taking care of themselves and their "community".

But over their heads, constantly, is the threat of a flood destroying their land and loosing their source of food and small income. They are mostly fishers i think and farming animals. but they are proud and do not want to leave no matter what happens. And Hushpuppy´s father

Now I have to admit that early on I significantly lost my enthusiasm about this movie. I had a hunch that I would be disappointed, but I had trouble figuring out what the real story was here. It sort of becomes a post disaster, road-, or rather a river movie, as Hushpuppy and her father, Wink, have stayed in the Bathtub and then venture out to observe what damage may have befallen the area while finding new hunting areas in the disturbed area.

But then it dawned on me what this movie is about. The little girl, though performing pretty good, never once smiles, least when she is with her father. Her mother has gone, but her father has created some myth about this fantastic creature, but we never get the real story of her disappearance. Could it be that we are in fact dealing with a feminist rendition of how "bad" a total economic collapse of America, will result in helpless fathers having no clue how to deal with these "strong and independent" new generations of über-mensch feminists post collapse?

Even if her Wink is able to provide food and catch fish with his bare hands, he "off course" have no clue how to bring up children without a woman around. This sick fallacy is so friggin annoying it makes me fume with anger. It is so ridiculous, since every single statistic in history shows how destructive single mothers are to their children. And that is the purpose, to keep pounding this lie that fathers are stupid and women are angels. It is friggin bullshit !!

Father and daughter never hug or laugh. They never talk in a decent low key and decent manner, they always yell or scream or worse. Wink only knows to be complete macho idiot like by always demanding that the girl have to act manly, by hitting, destroying and so on. In order to further the idea of "toxic masculinity". It is so stupid it makes me puke. And she can never cry demands her father. And then he sobs in the end to make him look weak and hypocritical.

The emotional depth of the two main characters is very flat and I find it incredible that this movie received a lot of nominations and awards and was praised as a masterpiece. Masterpiece? Nope, this is just empty emotionally, like the batman movies the director is a fan of. Making a girl scream, being violent and look grumpy is not my idea of emotional depth.

The addition of passages with prehistoric boars is not really something that adds to the whole, except maybe to dystopian revolution into something akin to the stone age. I never got any emotional attachment at any point except in the scene where the two of the cries with tears in there eyes in the end. A well crafted scene and good rounding of a pretty impressive performance by the girl actor.

So I guess I end up with a "not recommended" here. The cinematography is fine, the acting is fine and I guess on paper the story could be fine. But the execution just leaves me like .. meeh. I need more goodies to be enganged and specifically not be met with one ridiculous bashing of fatherhood after the other.