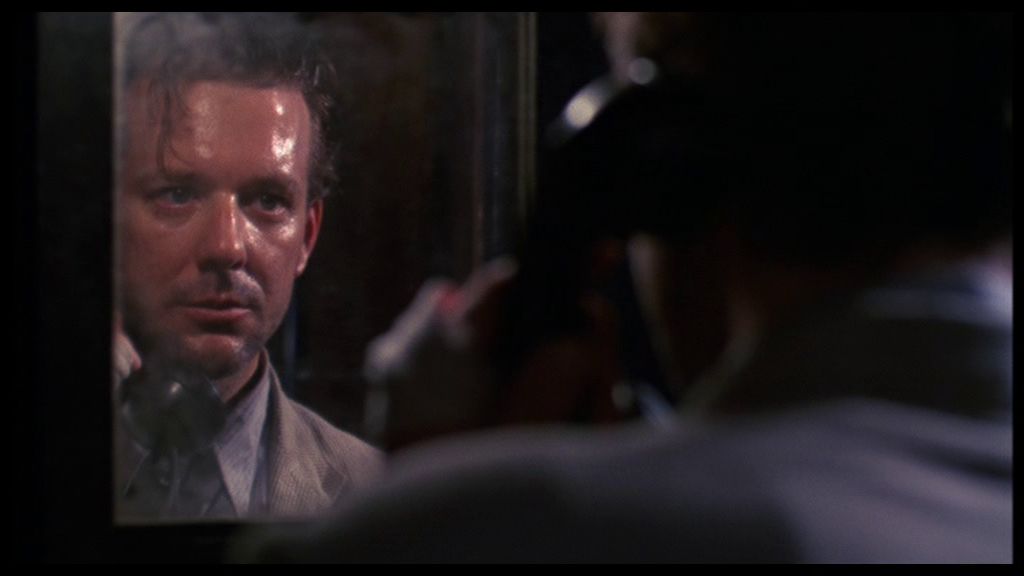 There are movies that are unjustly forgotten, and Angel Heart is certainly in the top part of that list. I actually saw it in theatres ... those 32 years ago (oh dear) and back then I remembered being fairly bored. It was nothing like what I had expected and went because the guys that went along had heard about a juicy sex scene in it, with Cosby show hottie Lisa Bonet. A few years later I saw it on VHS and remember saying to myself, this is one friggin atmospheric movie and it soon became one of my all-time favourites, wondering why it did not catch me in the theatre.

Never mind. At lot of water has run in the river since then but the movie still holds up of surprisingly well. It does have a light touch of that eighties saxophone ambience, but thankfully it is only a touch. If you have seen Mississippi Burning, the feel is sort of similar in some ways (not surprisingly as it is by the same director and both takes place partly in the south).

But then add a sense of paranoia, emotional emptiness, horror and more than a touch of noirish hitchcock and then you have an idea of Angel Heart, except it does not have too much suspense. The horror vibe comes from the religion and voodoo superstition combined with the ever present feeling of emptiness or disconnection, combined with a dose of light "The Shining" bloody splatter.

After a sort of classic noir, private detective setup, you slowly realise that the line between reality and Harry Angel´s (played brilliantly by Mickey Rourke) experience, seems to blur together. What is supposed to be that which he experiences and what is his memories? And are we seeing everything we need to see to piece this together?

The answer is off course no and the plot is only revealed at the very end, and then still seems open to interpretations. but even if the plot is pretty well thought out and adds to the overall feel of the movie, it must be specifically recommended for its atmosphere. Alan Parker manages to catch that sense of a downward spiral on many levels.

Harry keeps getting flashbacks that churns around the same scenes over and over. His clothes and appearance gets more and more shabby. his emotional state seems to get more and more out of sync with reality as the amount of dead bodies pile up everywhere he goes. It is basically a trip down into the depths of a haunted soul that is rejecting his history and darkest secrets.

Rourke is well chosen for this role. His boyish and sloppy charm fits the part perfectly. Robert De Niro, as his "client", is, well, Robert De Niro as he is best. A small part though where he never gets to really shine, maybe the weakest point of the movie overall. Bonet is decent as the charming and sexy teenage voodoo girl.

This movie should be seen as a kind of atmospheric therapy. It has you guessing what it is really about, but the central justification, is the atmospheric and slightly paranoid feel of the cinematography, that cleverly switches between straight forward camera angels to some seriously quirky ones, sprinkled with some closeups here and there.

It goes through the whole movie and never feels pretentious or artificial, rather it all seems to gel together with Rourkes expression into a whole, that is quite unique and unforgettable. No doubt it has its inspirations from earlier masters in the genres, but not too obviously. Parker does it his own way, with some simple but effective tools.

Angel Heart comes highly recommended, not only as a proof that the eighties actually managed to produce decent psychological movies without too many obnoxious cliches. The acting is great, the cinematography is certainly above average and even ranks among the best that this era has to offfer.

If you ge the chance to pick this up, certainly do so. I have a DVD that is of mediocre quality, sof and flickery, butt still it managed to deliver a decen experience. I can only imagine how nice a new 4K restoration may look.

I had never heard of this movie but it is on my watch list now. I like it when movies blur the lines of reality and really enjoy clever cinematography, and voodoo trappings totally appeal to me. This sounds right up my alley. Great review!