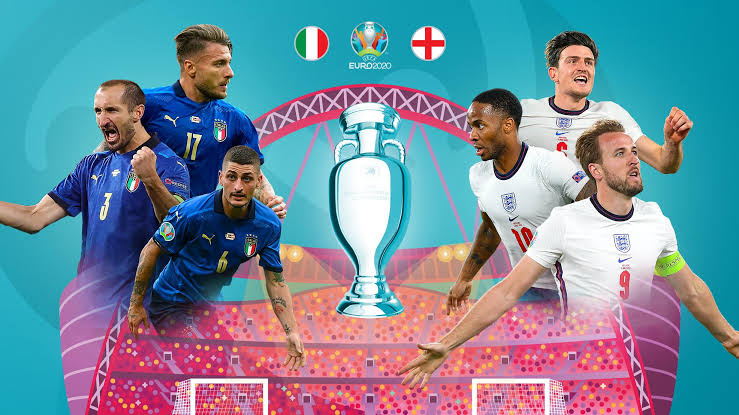 The UEFA Euros are just about done now. Time for the final drama. The very Final. England vs Italy. The of the most consistent teams throughout the tournament. So, how have these two teams been? Let's have a look

Italy was a side that went very much unnoticed. There was no actual hype surrounding this team. But they were on a roll of their own. Coming into the tournament with a record 20+ games unbeaten and several clean sheets. Such dominating stats but no hype is certainly interesting. In the first game, Italy beat a mediocre Turkey with a convincing 3-0 margin. And in the 2nd game, Italy were victorious against Switzerland with the score of 3-0. Both the games they played in a dominant fashion. Passing the ball around well, and an organized defense led by the likes of experienced veterans in the shoes of Georgio Chielinni and Leonardo Bonucci, Italy were quite reliable. However, the last group game wasn't the most pleasant of encounters. As they only managed to take a narrow 1-0 win over the Welsh team. Wales did concede a red card in this game.

Italy Are Showing Their Excellence From The Beginning Of This TournamentSource

Off to the round of 16. Here Italy faced quite a challenge. Austrian defense was hard to breach for them. The game went to extra time. And only then they could score two goals past Austria and later concede one. This would be their first goal conceded in this edition of the euros. Next in the quarters people thought Belgium would be a hard fight for Italy. Many underestimated Italy actually. But they stood their ground and won the crunch game by 2 goals to 1. And then in the semi finals. Another crunch game. Italy did score first late in the 2nd half. But conceded soon. Then eventually winning through penalties after Morata missed his penalty.
Line Big Blue Divider.png

England had a rather quiet campaign. 1-0 wins against Croatia and Czech Republic and a goalless draw against Scotland 0-0. After this kind of a performance, even though they were group champions many wrote them off. But they had one good trait, that was their defense. They were resolute throughout the campaign. They couldn't score many goals but they didn't concede any. Steady boat sailing towards the final. Beating Germany 2-0 in the round of 16 and Ukraine in a splendid fashion with a score of 4-0.

BBut yes, they disuffer a bit the semi finals. Denmark scored a beautiful free kick early in the first half. Then England did score soon enough. Though it was an own goal. Then the game went to extra time. Soon England got a penalty. But yes it was a controversial decision. Many people have been debating about it. But the referee's decision is final. Harry Kane did miss the penalty but scored on the rebound. And that goal was enough to send England to the finals

Italy looks to play in a more possession based system. The midfield three- Jorginho, Barella and Veratti are excellent passers of the ball and the good in rotating the ball and keep the play going even under pressure.

Lining up in 433 formation, Italy will look to play around the English pivots and eventually use the wide spaces to penetrate. They also use a relatively higher line in defense. This will be a key point as higher lines are usually easy to pass on the break, which England might look to use.

England's preferable lineup will be a 4231. Kalvin Philips and Declan Rice will be the two pivots. England will look to sit deep and play on the break. As Italy will play a buildup style of play, England will let them have the ball as they push higher up the pitch. And then when they win the ball in their half they can use Sterling and Saka's pace to penetrate the Italian defense.

Sterling Being The Focal Point Of The English ArtillerySource

And if things get messy towards the end, England have a good amount of options in their bench. Such as Grealish, Foden, Sancho. These are people who can create, and apply pressure.

The two team's defenses have been the most consistent defenses so far. And we've seen their attacking brilliance only time to time. Two quite evenly matched teams will lock horns, as it will be a hell of a watch. So, let's see what happens in the end game of Euro 2020.