A sparkling evening walk by the river 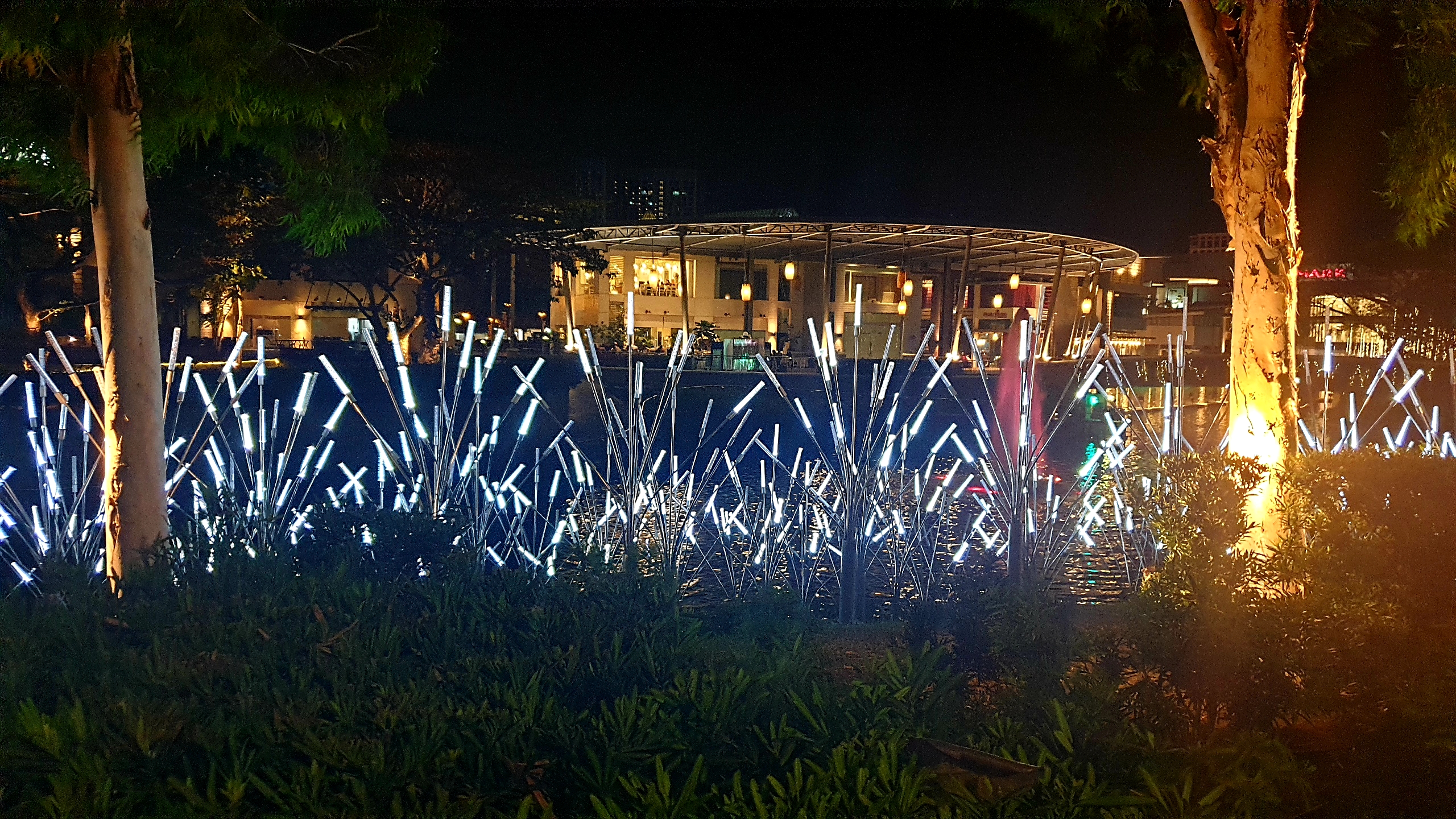 I am not familiar with the ins and outs of Festival Mall in Alabang, Muntinlupa City and I got my share of the puzzle when I dared to go with what I didn't know. There are many entrances and exits on different sides. I thought I was wrong to think that I can find my way back by getting out through an exit other than where I got in. However, that wrong move turned out to be a sparkling evening walk.

This was the view along the Civic Drive which was where I endes when I got out. For some reasons, Google Maps was showing that I was on the right track but the surroundings do not look familiar so I was in a wrong path. What's worse? I was alone along the road at almost eight in the evening.

I walked slower and stayed alert. After a while, two ladies were approaching and going the same direction as I was. Ahh, here comes my compass!

I asked which way is going to South Station and confirmed that I was indeed going the opposite direction. One of the ladies pointed the other way and said, "you can get inside the mall, go right and go out through the last exit." She meant the Festival Mall.

I thanked the ladies, crossed the street and came to a lane which was not even where I came from when I first exited the mall.

There is this bikers and joggers lane. It was inviting that I could have gone jogging only if I was in proper attire. I followed the lane to see where it leads to.

To the left of the lane is the Alabang River. Apparently, the mall took the opportunity of having part of the river in its teritory that they developed it as a river park.

Right across the river from where i was standing is an open hall where a band was playing live.

The trees have lights hanging all over. Christmas lights are not just for Christmas after all.

After the adorned tree is a bridge going to the mall itself. It was dark but thanks to the lights coming from both sides of the river.

At the bridge entrance is this map of the river park. For some reasons, I did not take a look at the details to find out where I was. I just moved on. I'll find my way somehow.

I went to the middle of the bridge and pointed my phone at the fountain. Why, the water became dark pink. I put the phone down and looked at the fountain. It was clear water, not colored. I aimed my phone again and looked through the lens. The color is back! So this is what they call camera trick. The color changes right before my eyes through the lens.

My phone was on auto-setting so I do not know which specific setting is doing the trick. Apparently, I do not know even the basics of photography. It looks very good anyway so that's really cool.

I went back to the end of the bridge where I came from and turned left to a marker for ampitheater. Say what? Ampitheater along a river?

Yes, there was indeed an ampitheater along the river bank. It is a small space but seems to have been carefully designed. I wonder if there is any entertainment shows being held on the river itself that there is this ring in here.

I finally crossed the bridge and came upon two security guards standing by at the other end but their backs were on me. I excused myself to call for their attention and asked the way to South Station. They both turned their attention to me.

One of the security guards answered in Tagalog.

"You can through the mall but you may get lost. It will be much easier if you go downstairs and follow the river."

The river leads to South Station? Why, I haven't even thought of that. And stairway? I looked at the direction where the guard pointed down beside him. Ah, he is leaning on a stairway railing.

The walkway underneath looked so calm and serene. There was not a soul when I got down.

Just a few steps forwarf and I noticed a structure being built across the river. What is that? A pagoda? It was above the ampitheater. Why, I did not look at my back when I was towering over it so I could have taken a closer look at the structure. I am sure it will be an addition to the attractions in the river park.

Towards the end of what was in sight is a right turn to this view of a bridge which is used by both public transportatuon. There was actually a bus that just passed by. Do you see that yellow thing under the flare?

The posts looked elegantly designed for a public transportation facility.

Looking back at where I came from, I was amused to see a beautiful sight. The water was sparkling calmly in the middle of darkness. The lights from the bank added to the coziness of the sight.

Looking forward, I was amused by another colorful sight under a bridge. The reflections on the water up to the ceiling glow in the middle of the dark that makes it inviting to come nearer.

Under the bridge was this boat of what looks like someone who collected trash from the river. I wondered why the trash was not disposed and just left in there.

Some more walking and I came to the Water Park. How was it called water park when it is not on water? Is it because it is beside the river? I have no idea. I need to research further on that because the quick Google search results do not have straight answers.

After the park is another bridge between Festival Mall and Landmark. This time, let's have a closer look.

The bridge has rings around it that look like giant glow sticks.

The ceiling was designed like waves and it looked just as what it is with plain eyesight - plain concrete. However with the effect of lights from the rings, the ceiling brightened up and enlivens the river in the dark.

The view in front finally gave me a light at the end of the tunnel. That orange building in the middle is my landmark which is near where I was going. The security guard was right. Taking the path along the river was much easier. I am sure I could have gotten lost inside the mall if that is what I took.

The light at the end of the tunnel became brighter when I came to a literal tunnel with the sign to Festival Walk and Alabang-Zapote. The latter is the name of the road beside South Station.

At the end on the tunnel is this intersection with the Festival Walk. To the left is going to one of the entrances to the mall. I get to the mall through this Festival Walk most of the time so I am very familiar with this spot.

Yeah, I know this intersection but never tried going the other way to follow the river and discover where I have traversed through tonight. I needed to get lost to do that. Apparently, great discovery can come unexpectedly.

The Festival Walk is this pathway from the side of Alabang-Zapote Road to the mall. It is the most common, and I may say popular, entrance to the mall because of it being a riverside. During my few visits to this mall and when I walk by during day time, there were onlookers watching the river. Most of them with children enjoying the sight of fishes swimming around.

At the end of this walkway is a foot bridge crossing Alabang-Zapote Road. At the end of the bridge is a commercial building and right beside the building on the left is the South Station terminal where I will take my ride.

Thanks to my getting lost that turned out to be a very good evening walk, colorful and peaceful without the noise of a crowd in a mall.

WOW such a beautiful park, I am glad those ladies helped you find the way

Thanks for joining Wednesday Walk :)

Yao, thanks to the ladies indeed that I discovered the river park. Otherwise, I could have gone astray at night.

You're welcome. Thanks too! 😊

Question from the Bible, Is there such a thing as untimely death in the Bible?

Your Publication Has Been Voted Manually 5%.

It is a pleasure.

It was a good experience to get lost and find your way back. 👍

A nice walk and long day? You all walk in the dark or? Thank you for sharing. It was one of these rare days I could see photos. 🙂

A nice walk and a long day.

I like that! And walking in the dark? Why not? Sometimes I feel it like a fulfillment when I get lost and find my way back. 😊

What do I do with the trendo token? There are so many tokens out there that I can't keep up. 😁

Nice evening walk along the river with colorful things and peaceful moments! Interesting post and beautiful photos! I felt as if I walked with you from the beginning until the end. Thanks so much for sharing. ;)

I felt as if I walked with you from the beginning until the end.

I am so glad to know that because I know I am not a good story teller. I struggle to be able to have my readers relate to what I am writing because many times, I read back my posts and realized that I should give more substance to my post. 😊

Howdy macoolette! What a wonderful walk that turned out to be with such interesting scenery and colorful lighting!

Yeah, sometimes you need to get lost to discover beautiful things. 😊