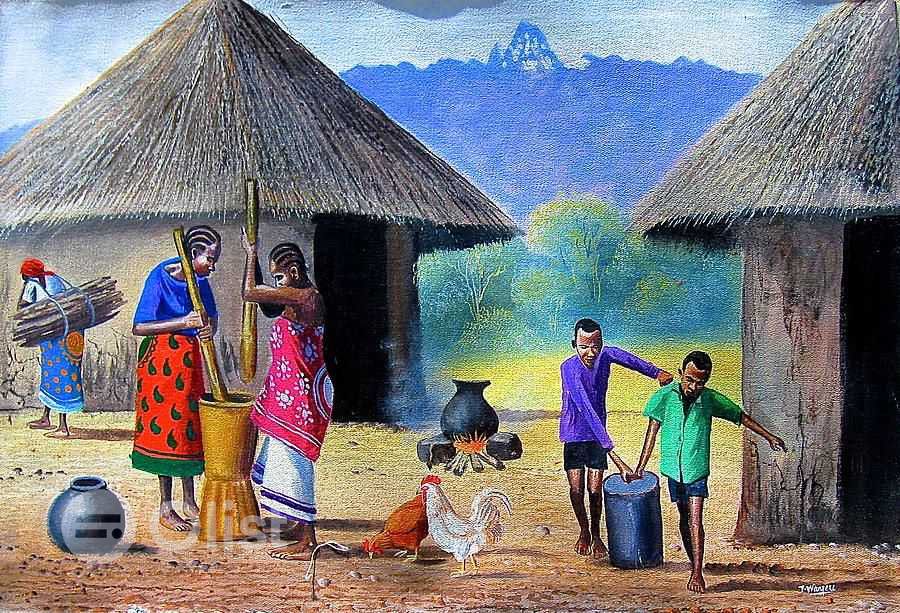 I DON'T KNOW WHY I'M TELLING YOU THIS FELLOW STEEMIANS

A towel is wrapped around @nattybongo waist. His potbelly overlaps the towel and exposes his not so appealing navel. There's a sponge, in his right hand and a bucket of water lies in front of him as he waits for the occupant of the bathroom to come out so he can go in and bath.

After what appears to be a thousand and four years, a woman walks out of the bathroom, empty bucket in hand and a cloth around her chest. Two fufu-like elements shake up, down, left and right as she makes her way into her room at the far end of the compound.

Meanwhile, @mcsamm walks out of the same room. He has a chewing stick cut off from a nim tree stuck in his mouth. Occasionally, he rigorously moves the chewing stick left, right, up and down. He is wearing only a boxer shorts that exposes a bit of the tip of his "Sokoto red bull". Red bull is fully awake - very normal of normal men, especially, in the mornings.

It is Amina's turn to sweep the compound. She holds a broom and bends down to start sweeping. Her blouse is loose and reveals a large dose of cleavage to the prying eyes of the other married men in the compound.

Amina's instincts tell her that some eyes may be looking, so she grabs the top of her blouse holds on to her breasts and continues to sweep.

"Amina is stingy with her breasts," thought @bigsamm who is sitting at the far end under the mango tree.

Night has fallen, and the moon is showing its full roundness, bringing a mini daytime feeling. Two young teenagers, @njaywan and @kharrysally are behind the old tractor which has been abandoned by its owner for several months now. The back tyre of the tractor is big enough to hide them from the staring moonlight. They are still there. They have been there for long, whatever they are saying to each other and doing with each other remains their secret.

Meanwhile the night meal is ready, and @oppongk the senior most child in his father's household is not very excited. When the time to share the meat comes, he will not be able to hide an extra piece between his index finger and his thumb. And it's all because the moon is staring and so are the eyes of his 6 siblings who have all gathered around the bowl of tuo and dry okra soup.

The women in the village walk together chatting happily into the bush at night. They have their moments to chat. When they go to the stream in the mornings and when they go into the bush to push out unwanted remnants of food from their bellies.

As for the men, they go to the bush anytime. Women do not go to the bush to push during the day, because, it has come to their knowledge that some men like to hide and peep.

As for the children, the moonlight night is an extension of the daytime. The young girls are playing ampe and the young boys are playing alikoto. As for @njaywan and @kharrysally, they are still behind the tractor tyre, away from the staring moon.

Fellow steemians, to be honest, I don't know why I am telling you this.

Thank you for making time to read what I have for you.

What were we doing for so long behind the tyres? Staring at a moonlight? 🤣🤣🤣.

I really liked your story, quite creative.

Just be sure to use only copyright-free images in your posts.

HOW TO PROPERLY CITE YOUR IMAGE SOURCES

What you guys were doing there, I can't really tell. Lol

Thanks for the compliment senior 😊.
I will try as much as possible to visit the site to learn more about copyright

Wow! That's very talented of you. Your writing contest is superb. Thanks so much, since the story line is very good.

Thanks a lot. I really appreciate the compliment

I think @njaywan is needed here 😂😂😂

🤣🤣🤣I don't know why i kept reading this either.
Great work

Thank you 😊. I really appreciate your support