A message to the #Tron army: Show Up. 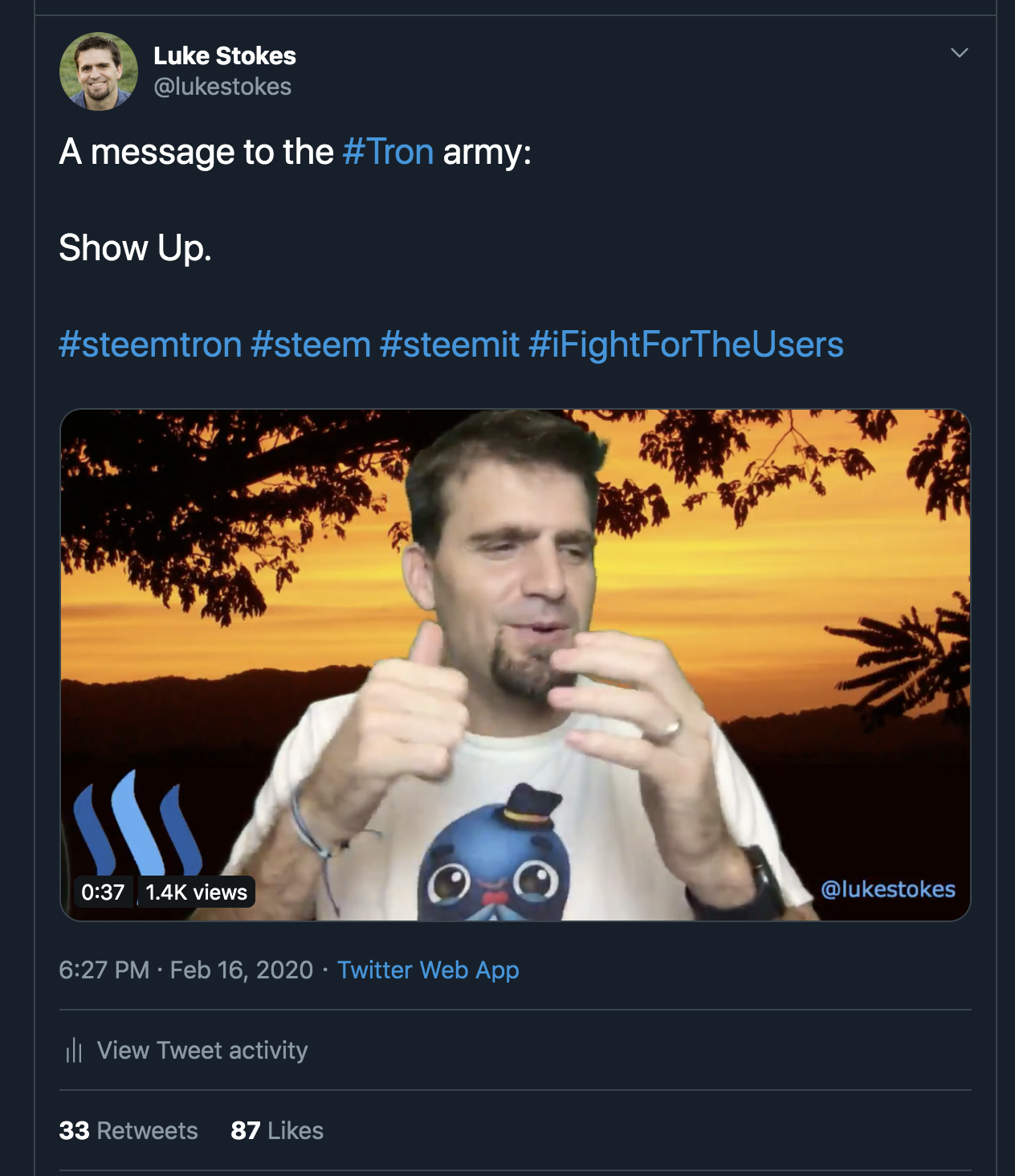 I tweeted this a couple hours ago, and it's starting to go viral: ![](https://cdn.steemitimages.com/DQmaUucPoemN6HiWcck4Lb6gzUZwrph7huDDgL21VZyAme7/image.png)

You know how much Twitter will pay me for this 30 seconds of my time?

The Steem blockchain, however, will reward me with some tokens based on the stake-weighted vote of Steem Power holders who like to support my content with their upvotes. That is pretty cool.

If you'd like to see the Tron community show up here on Steem, get some skin in the game, and follow @justinsunsteemit's lead and buy some STEEM then feel free to retweet that one and let's see what happens.

Also, there's still time to get your thoughts in on a good hashtag for this Tron/Steemit (and potentially, Steem, if the Tron community is worthy of us) merger. So far, it seems like #steemtron is in the lead. Vote on Twitter or on chain with dPoll or better yet, create your own poll and spread it far and wide.

If you are new to Steem because of this Tron business, be sure to say so in the comments.

Luke Stokes is the Managing Director for the Foundation for Interwallet Operability as well as the Interim Executive Director for the EOS Foundation. He's passionate about voluntary systems of governance and has been involved in bitcoin since early 2013. He's been a witness for the Steem blockchain since early 2018 and a custodian for eosDAC, a community-owned EOSIO Block Producer and DAC Enabler, since its inception. With a computer science degree from UPENN, he built, bootstrapped and co-founded the shopping cart software company FoxyCart over a ten year period and is now focused on blockchain technology as a means to create a world we all want to live in. He currently lives in Puerto Rico with his wife and three children and enjoys discussing everything from philosophy, to consciousness, to voluntaryism, to love and awakening. lukestokes.info
UnderstandingBlockchainFreedom.com fio.foundation eosdac.io

Hi Luke, I challenged Ned to a MMA Cage match

Yeah where are all the TRON heads?? LOL they need to buy some STEEM and get some skin. Or they just expect Justin to take ours and give it to them??? lol hope not!!

That actually would be a great outcome, IMO. Decentralize that stake to his millions of followers and keep the governance in the distributed hands of the users.

He did mention something about a giveaway to TRX holders, I mentioned it in a post recently that it would be great for distribution!

Shhhh you're not supposed to tell the others if Daddy Tron's plan. Just give him your Steemies like a good like boy. Make sure you address him as "Big Poppa" or "Daddy".

Don't forget to do a curtsie. Oh and don't make eye contact and that could be construed as not submissive.

You do these things. You'll do just fine on Tron-It!

Long it Tron-It! Sounds mighty fine to me, and remember to never walk over his shadow either!! ssh!!!

I would love to get .10 Steem fo every TRX I hold.

Haha good one! I should of thought of that 😂

Boomshackalacka watching and learning is a great place.. Let's see what the TRON tribe can bring to the table. Let steem thrive

Glad to be back on here!! Very excited for this partnership to grow with two large and active communities.

They are woefully misled about our chain but likewise is their supreme liar errr I mean leader.

Damn it Sigmund Freud.. you got me again!

Do you think this will prevent him from eventually putting this chain on ice? Do you not understand? He wants the userbas on HIS creation. One advantage we have is he thinks he can port Steem to Tron the way it is. (C++ - Java).

hhy do you think this happened so near to the launch off Voice???

THE SUNSET IS INEVITABLE!

Tron fanboys will need to prove their sincerity in this "partnership" :)

At least create accounts on Steem and start posting

great message man! I think we all need to look at this in a positive light. I have my skeptical thoughts, but I am starting to try to take a more optimistic approach. I do hope we can all welcome the Tronians with open arms and just have one big ass awesome community! It is good to see the fire though in the STEEM community for sure over this.

How is Life in Puerto Rico right now?
Solid? Who runs the government?
Greetings ;)

I don't spend too much time worrying about government.

That sounds good, if they don't bother...that's the best ;)

That was the best message to them. Thanks for supporting steem in twitter. I just voted on your witness. I hope you will always defend the original steem !

I will always do what I think is best to create a world we all want to live in. When the decisions are on the table, I will make my position clear, while being open to input from everyone. From there, the token holders will decide by voting in witnesses that they agree with. Thanks for your support.

I am glad you are feeling excited my dear friend!

Lol As an olive branch I picked up a few more tron on binance, already had a little stake from way back! I see the views keep going, come on show up, don't be afraid, lets see what the real Tron army or rather our new army are all about

Do u know what i like about steem around this tron/steemit partnership. It's that we are having discussion on our own protocol, so eating our own food while having fun supporting each other. This has value. In accounting it's called goodwill value.
Long live Steem. If i have a chance to pick a priority for justin, it will be to invest on interoperable solutions for the 2 chains.

Heck yeah! I'm all about us eating our own dogfood.

Nice to see some conversation about the Steem Tron Venture on Twitter. This could be a powerful partnership if egos can be put aside. Great post.

What do you think of a coordinated effort to help Tron users set up a Steem account through @anonsteem? This might create more interest in getting involved with Steemit. I don't have much, but I would sponsor a couple of accounts for new Tron members if someone would organize it.

Yeah, that might be a good idea. I see a number of people saying they are having delays signing up.

Nice brother, i think this is good idea and good information to all steemian in the world.