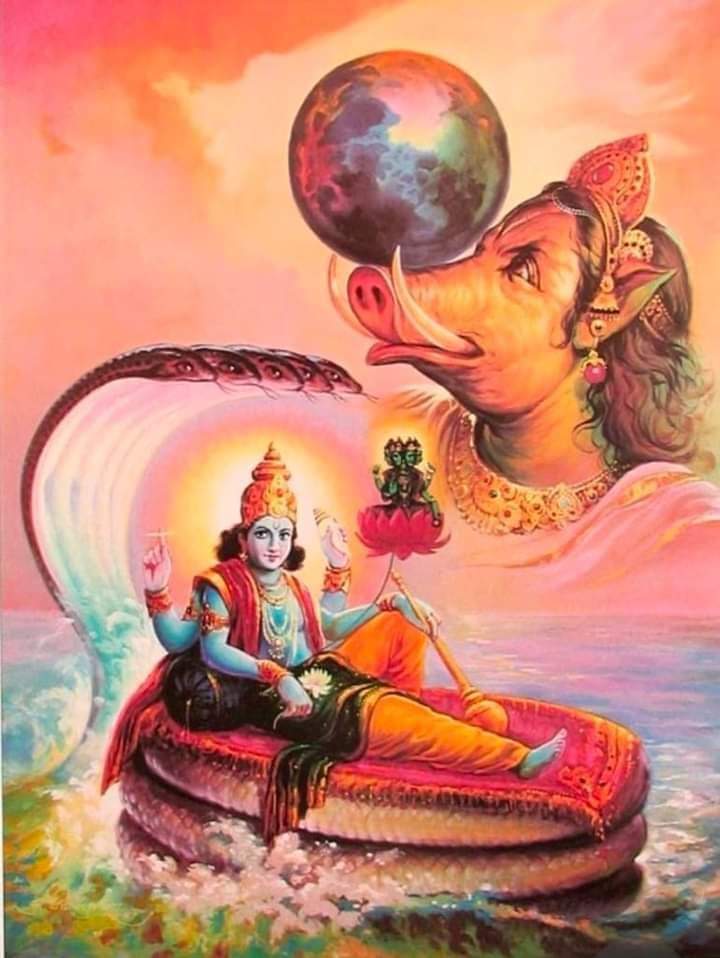 We have always heard that 𝐁𝐡𝐚𝐠𝐰𝐚𝐧 𝐯𝐢𝐬𝐡𝐧𝐮 took the form of WILD BOAR (varah) to save earth which was drowned in an ocean by 𝐇𝐢𝐫𝐚𝐧𝐲𝐚𝐤𝐬𝐡..But people who have read puranas properly they might have read that in vishnu puran it's written that:

SO WHAT ARE THESE? IS OUR COSMOLOGY DESIGNED THIS WAY? Any general people will laugh at it.. but let us delve deeper..

𝐈𝐭'𝐬 𝐚𝐥𝐥 𝐚𝐛𝐨𝐮𝐭 𝐨𝐮𝐫 𝐜𝐡𝐚𝐤𝐫𝐚𝐬..We have 7 chakras and each chakra is one higher level of conciousness..Our base chakra is called 𝐌𝐎𝐎𝐋𝐀𝐃𝐇𝐀𝐑 𝐜𝐡𝐚𝐤𝐫𝐚.. it's related to earth element.. it's also called jambudweep (because later our physical earth is also called jambudweep)..It's our general conciousness present in every creature.. so it's #bhuloka..as each chakra starts activating, higher levels of conciousness starts opening in us.. but in physical form we still remain on earth..

He hid bhuloka in #KSHEER #SAGAR.Ksheer sagar is premordial ocean or ultimate wave frequency from whichcreation occurs . Its base of creation..Hiranyaksh hid earth in ksheer sagar means he just changed the frequency of entire universe that every creature lost its conciousness.. no puran mention death of any creature.. which automatically signify lost of conciousness of all creatures..Bhagwan Vishnu took form of varah and re- stabilized the frequency of universe so that all people gain their conciousness and world can walk over again..So people gain their conciousness again means their MOOLADHAR CHAKRA got activated again..

So it's said that varah flattened the earth..