something you can't see 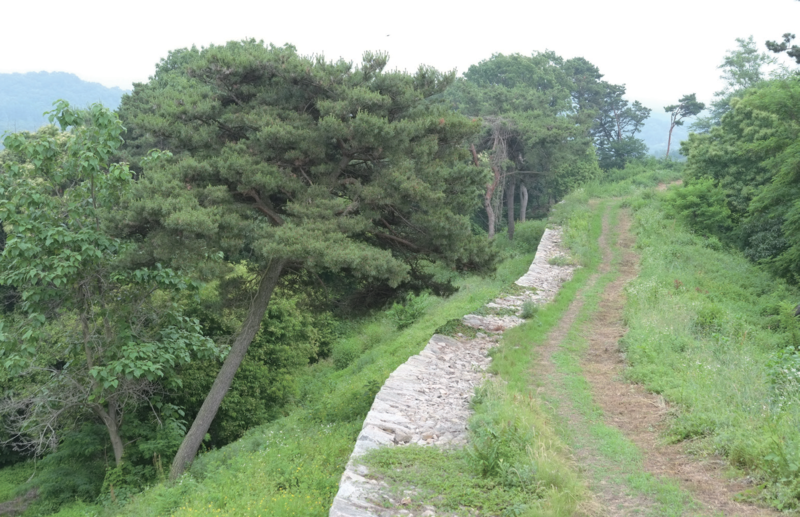 There are many aspects of one person. Under the influence of time, the vague belief that a person is the whole of what has happened as an event or an important encounter with another person. So we wonder a lot about each other to get closer.

Ask about what has happened in the past, not just about what is happening right now, but about what you imagine in the distance. The process is like getting a step closer, wiping a cloudy window. It's not just the case of humans. Some places have a lot of stories, so it's easy to get to know new places

. Mars 'Dangseong' was a normal and quiet forest path.

The place is ready to say one way out

I have never voluntarily visited places where there are traces of history. Roughly aware of how the past works in the present, they lived with thoughts that should not be ignored. It was also negative to cover the numerous faces of the place by introducing a sign and selecting a special historical event. Of course, the idea has not changed much, but after a while back in Dangseong, located on Seosin-myeon, there were some thoughts that remained in mind. First of all, there are many things that have been accumulated for a very long time in a place that no one can experience, so we have to remember or concentrate on some of them. And even if it's something that most people don't care about, it's very important to someone, and there's the beauty of that relationship. Finally, if I have any interest in any object, then what I find out is that I will bump into, blend with, and give rise to unexpected new ideas. The first information I learned about sugar was that it was a door. The route from Dangseong to the West Sea and along coastal routes has been a link between China and Japan since ancient times. Recognized as a trading partner by China, Baekje began to open the West Sea coast from Dangsheng, where many of the artifacts of Baekje were found on the west coast and the artifacts of Baekje found in China.Seems to Representatives of the Dongjin period, digitization, bronze edible used for boiling medicine, and coin-shaped jars were typical. Once I knew the basic background, I used to look at distant places naturally as I walked along the castle. Unlike the age when the word 'unknown' is used as powerlessly as it is now, did the exchanges with the world across the sea create many stories in itself? In addition to creating an efficient distribution channel to make money as it is now, there seemed to be a lot of pure curiosity towards me and others .The second piece of information I've learned is that research on sugar is more active in recent years. Researchers uncovered relics that could be evidence of trade, highlighting the importance of Tangi, and in response to this, Hwaseong-si announced plans to re-examine its nature as a space for historical and cultural education. By 2027, it was to restore major facilities such as the castle and the ruins of Manghae, and to build the surrounding infrastructure to create an exhibition hall and participatory cultural space. What impressed me about this was the gaze of some who had a deep appreciation for the importance of historical research. I could feel that a quiet forest trail looked like a thick book in their eyes, and even a conversation without a lie. For example, a farmer looking at the plain, an astronomer looking up at the sky, would probably be more accurate if he was reading something, unlike someone unintentionally passing by. I could have a quiet conviction that such a gaze would enrich life.

Even if you don't care, it's very important to someone

, and there's the beauty of that relationship,

Meet the things that can not meettechnical imagination

A little over a kilometer Dangseong circumference was talking to me from a moment. There were only a few things I learned that day, but the 'knowing' things made me wonder and imagine me as if I had life and mixed with the thoughts within me to produce new ideas. I wondered what the past of my neighborhood is, not Dangseong, and how is Korea remembered in 2018 about two hundred years when I disappeared without a trace? I thought about it. It was an imagination on the one hand and a little depressed on the other. I stumbled upon a verse I read in a critic's column. For some people, only work at the moment affects feelings, but for others with empathy, they can feel real pain in things they have not experienced, even in stories in history. It was the point that such a person could live a more sensitive world in a wider time zone. If I went to Dangseong and gained such empathy, I could not. Looking back on my time, I was closer to human beings. But it wasn't that my heart trembled that day. I approached and touched the large stones that make up the castle from afar.Was this stone watching me just before I approached the summer vines carefully? While having such a funny idea. There was some shame in the personification of the stone that he could feel. But suddenly I was curious about one face. 'What kind of look was this man who would have stacked this stone a long time ago.' I felt sick at the bottom of my stomach. It was not regrettable for the person who had to do the hard work. In addition, it wasn't even that I wondered, 'You've got a good line with big stones.' I didn't know him at all and he wouldn't have imagined me. The idea was so outrageous that I kept teasing myself, but on the other hand, I wanted to be someone who meant it forever or sometimes.