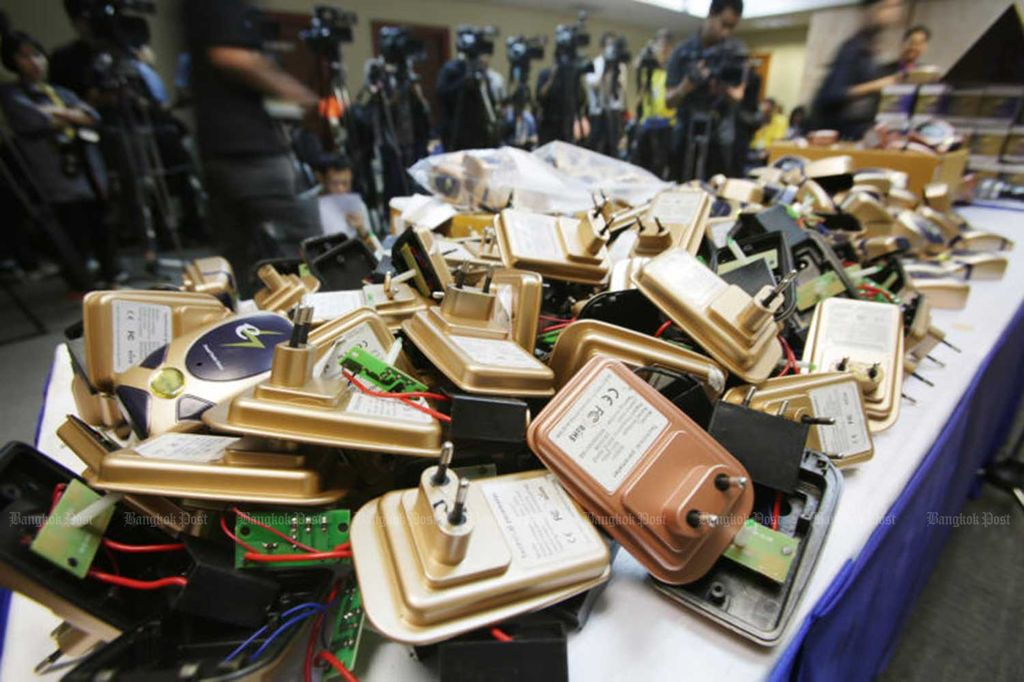 Four members of a fraudulent gang spent two years selling completely useless alleged power savers over the Internet, generating sales of around 50 million baht. In their fraudulent advertising, they claimed that users of these devices could save a lot of money on their utility bills each month. They have sold the so-called "Power Factor Saver" on the Facebook page "Expert Electric".

Police Major General Sithatchakhet Khruwattanaset, commander of the Department of Consumer Protection Police said Friday (23 August) that his officials, in collaboration with representatives of the Department for the fight against technological crime, the Office of the Consumer Committee and the Metropolitan Electricity Authorities (MEA) the gang after Raids in their rooms in Bangkok and Chonburi could arrest.

The two arrested Vietnamese and Thai people were packing the alleged "energy savers" for delivery to customers when the police raided two homes in the Lad Krabang district of Bangkok on Wednesday.

One of them, a 37-year-old Vietnamese, admitted to being the owner of the two houses. In a search, many energy-saving features - documents with detailed information on purchases and packaging materials were found.

The police said the gang sold power savers on the Expert Electric Facebook page. They claimed that the appliances could cut the electricity bill. Photos allegedly from MEA employees who attended training on device handling were also posted on the site to mislead customers.

A police investigation found that the four suspects had been hired by two Vietnamese gang leaders to accept orders for the alleged power savers online and to package and deliver the goods to customers.

According to the gang members, they sold around 100 devices a day at a price of 999 baht to their bona fide customers.

The authorities then extended the investigation and seized 64 other energy savers, 88 energy-saver covers and other items on Thursday (22 August) in a Pan Thong district home in Chon Buri. The house was not occupied at the time of the raid.

The police said at least 100 people had placed orders every day. They estimated that 100,000 of the false power savers had been sold in the last two years and the gang had made at least 50 million baht sales with the wrong power savers.

A MEA representative said the devices could not cut electricity bills, as the gang fraudulently claimed.