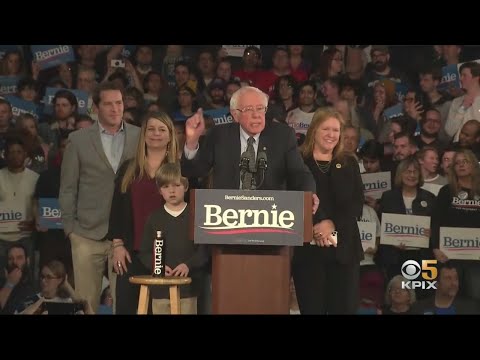 DNC is in a problem again. Like four years ago, they cannot grasp why a mass of people al over the United States is voting for a self-proclaimed ‘Democratic Socialist’, instead of well known criminals, loving, corrupt mainstream capitalist candidates like HRC, Joe Biden, Mike Bloomberg or Elizabeth Warren. That defies their logic, right? Look how they ’fixed’ things in Iowa…

Four years ago, the scam was revealed thanks to Wikileaks, and one man paid the truth with his life. His name was Seth Rich, if you remember him. Winning DNC candidate in 2016, Bernie Sanders, was shunned away in favor of Hillary Clinton. At the general surprise, Bernie didn’t go independent after the revelation, but decided to be ‘a party soldier’ and support Hillary. We know how everything ended.

Having a bad experience with an ‘easy choice’ of the ‘right candidate’, this time DNC started rigging from the very beginning. You see, they have developed the new app designed to help tabulate and report the result, but it turned out some technical difficulties with ‘inconsistencies’…

“We found inconsistencies in the reporting of three sets of results. In addition to the tech systems being used to tabulate results, we are also using photos of results and a paper trail to validate that all results match and ensure that we have confidence and accuracy in the numbers we report.”
— Mandy McClure, Iowa Democratic Party Communications Director

Right. It can’t be that Bernie won by a landslide. Even despite the fact that he was leading Iowa polls by four points on average only two days before the caucuses:

There must be some mistake. And mistake should be no obstacle for that gay… guy with unpronounceable name to declare himself a winner. OK, let’s see what’s with this app. As you may not know, this isn't the first time the parties have used an app in Iowa. In 2016, both Republicans and Democrats used an app designed by Microsoft. This time, Democrats took the app development in their own hands. According to HuffPost, creator of this year’s app was a tech firm called “Shadow”, affiliated, and funded by, ACRONYM, a Democratic digital nonprofit group headed by Gerard Niemira, a veteran of Hillary Clinton’s presidential campaign.

At this point we won’t question if that was a realistic sum for an application that has to be foolproof against the security breaches and reliable in counting the results, removing any shadow (where have I heard this?) of doubt about possible rigging. Iowa is a small state. Instead, we are going to ask another question: Who were the donors for this app? $21,250? Is that once or twice?

“Pete for America Inc.”? A campaign of a self-proclaimed winner? How quaint! You do not think it would be unusual that app is favoring its major donor? Of course, not! Who’s gonna notice such a trifle? The Deplorables?

Or would you rather believe the final results of the unreleased Iowa poll, twitted by Mike Cernovich? 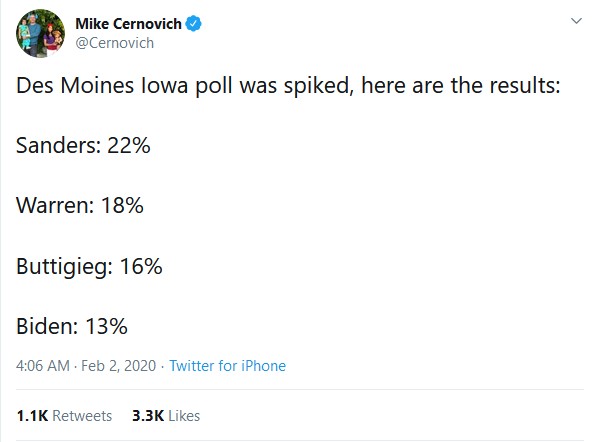 And while we are waiting the results from Iowa, we already know the true winner:

So, the Dummocrats (can’t help but notice this sounds as a compliment to them) are on their loosing road again. It is clear now they would rather have Trump in power than Bernie Sanders. It’s a mission they got from their plutocratic overlords. Even at the expense of self-destruction. In such case, you know the drill…

Wonder when DNC will remember to scream “Russian hackers”!

Never forget that Julian Assange was the one who took off the mask from the corrupted political system in the U.S.

IMPEACHMENT AFFAIR: In Search for a Quality Lie

Ukrainian Background of the “Impeachment” Affair

Check out ABRA and easily invest in 28 cryptocurrencies or BIT10, an index of the top cryptos. Use this link to sign up and get $25 in free bitcoin after your first Bank/Amex deposit, or 1.5% cash back when you exchange cryptos
https://proxy.duckduckgo.com/ip3/bitcoin.org.ico: 1GZQG69sEKiMXKgGw9TcGcUCBoC4sC1ZYp

Posted via neoxian.city | The City of Neoxian

Bang, I did it again... I just resteemed your post!
Week 21 of my contest just started...you can now check the winners of the previous week!
Pixresteemer is also listed as promoter on The Steemians Directory
!DERANGED
8
04.02.2020 14:25
0
#

You just received DERANGED @lighteye Keep up the great work. Congrats, you have been gifted 1 DerangedCoin. You can redeem 20 of them for an upvote from the deranged.coin account. Redeem your tokens by sending to deranged.coin through Steem Engine with your post URL in the memo field, view all your tokens at steem-engine.com

You realise that citizens get a chance to vote in China as well, right? At least there they have the balls to call it what it is... a one party system.

Thank you very much, @informationwar & @aagabriel